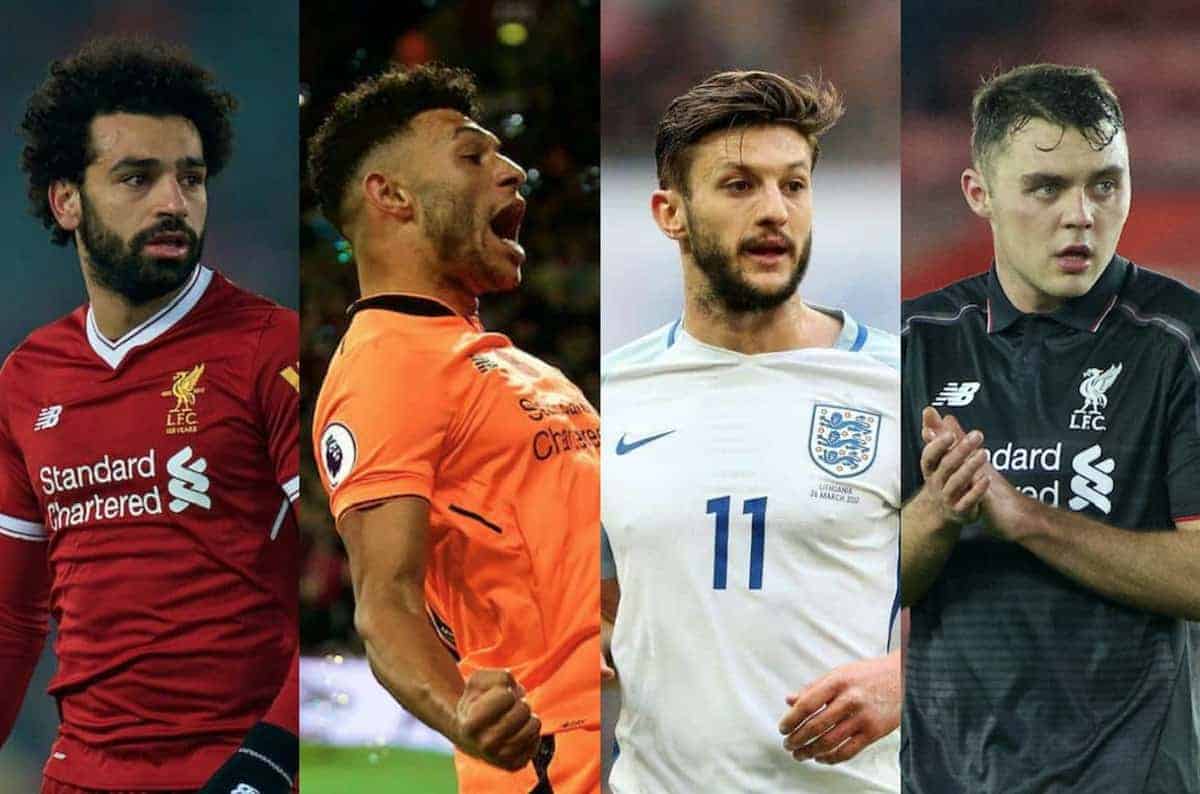 We round up all the latest Liverpool news and rumours on Wednesday, including excellent words from our No. 21 and updates on two loanees.

Earlier in April, Mohamed Salah made history as the first player to win the Premier League‘s Player of the Month award three times in a single season.

And in Saturday’s 3-0 win over Bournemouth the Egyptian winger netted his 40th goal in a record-breaking campaign that has seen him cement himself as one of Liverpool’s best-ever signings.

Nominated for the PFA Player of the Year award on Saturday, Salah is widely expected to vie with Kevin De Bruyne for the top prize on April 22.

Both have been recognised as part of the Team of the Year, with the PFA announcing the selection on Wednesday morning—but the likes of Andy Robertson and Roberto Firmino miss out.

Ox Loving It at Liverpool Since his £35 million move from Arsenal in August, Alex Oxlade-Chamberlain has won over plenty of admirers at Liverpool for his attitude on and off the pitch.

The 24-year-old has scored five and assisted seven in 40 games for the Reds so far, and is swiftly establishing as an important first-team regular under Jurgen Klopp.

It took a bold step to leave the comforts of the Emirates for a new challenge, but speaking to LiverpoolFC.com the No. 21 insisted it was the right decision:

“I love it. It’s not hard to go and enjoy it when you go out there and you hear the fans singing.

“Again [Saturday] was amazing. It’s not hard to enjoy your football here, really.

“The buzz around the city at the moment is amazing. As a player, you can’t thank people enough for that, they are the moments you dream of as a young lad.

“To play for a club like Liverpool that has support like this and to see the appreciation from the fans, it just makes me want to go on the pitch and every time we can keep making them happy.” Adam Lallana is currently in South Africa as he continues rehabilitation on a hamstring injury that has ruled him out for the last four games.

The 29-year-old is facing a race against time to make his comeback for Liverpool this season, with a potential seven games left to play.

While Klopp is likely to take a more cautious approach to Lallana’s return, the midfielder will be desperate to prove his fitness as, according to the Times, he could miss out on a World Cup place.

This comes due to the resurgence in form of Jonjo Shelvey at Newcastle United, with Gareth Southgate considering the ex-Liverpool man as an alternative to Lallana and Jack Wilshere.

Given Lallana has played so little football this season and Shelvey is producing a series of impressive displays at St James’ Park, few could argue with this decision.

Awoniyi to Take Next Step on Loan The 20-year-old’s key role at Mouscron could be crucial as the Reds apply for a UK work permit in the future, though he is still likely to spend next campaign away from Merseyside too.

According to Nigerian outlet Megasports Arena, both Anderlecht and Club Brugge are interested in securing his services for 2018/19.

Awoniyi has settled well in Belgium, and with Brugge and Anderlecht both set for either the Champions League or the Europa League next term this could be the next step in his development.

If he continues to shine away from Liverpool, the hope is he can prove his worth to Klopp in the long term. One loanee whose season has been less profitable, however, is Connor Randall who, after a bright start at Hearts, has fallen down the pecking order in Edinburgh.

Having initially impressed under Ian Cathro in an unorthodox role in the middle of the park, the appointment of Craig Levein as new manager in August saw him return to right-back.

There his game time has suffered, and according to the Edinburgh Evening News Randall is set to make his way back to Liverpool at the end of the season.

With the Reds’ right-back ranks as well-stocked as ever, there is no chance Randall will stay at Anfield long after his loan expires.