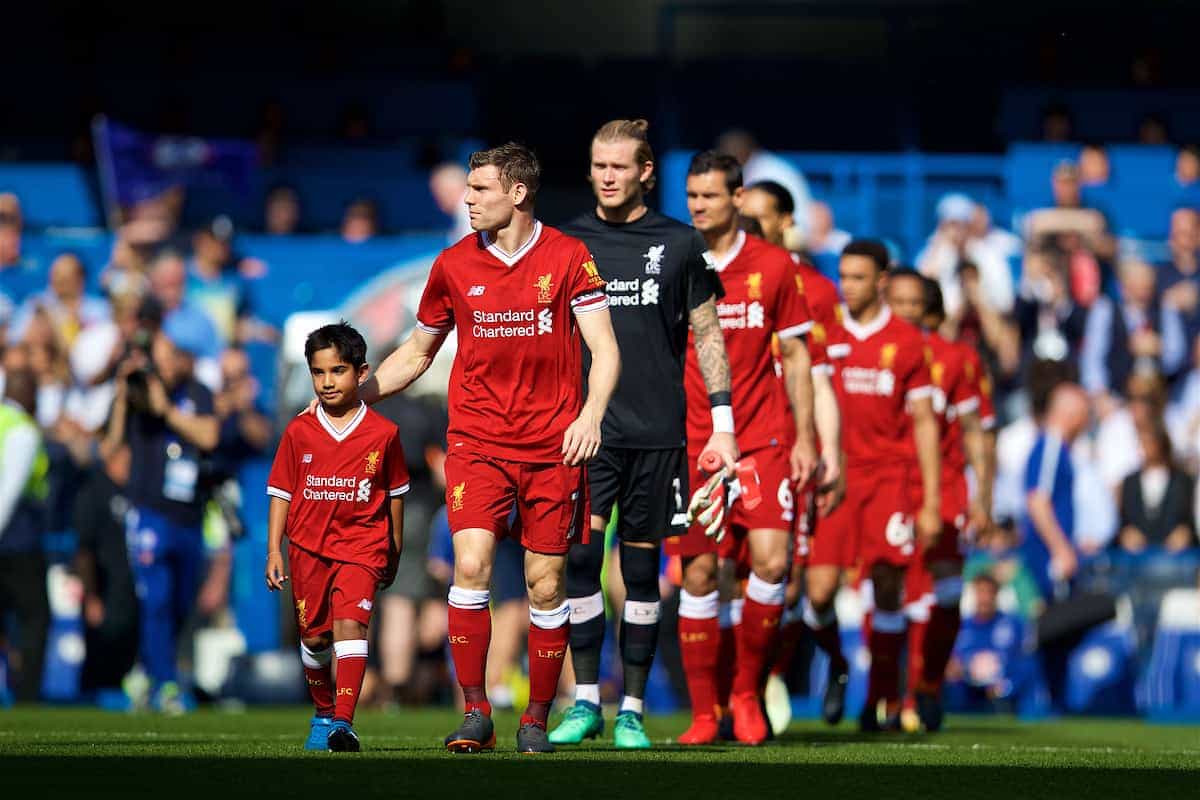 The 38th and final round of 2017/18 Premier League fixtures take place on Sunday afternoon, with Liverpool one point away from a top-four finish.

It was a frustrating day at the office for the Reds last weekend, as a tired-looking performance saw them lose 1-0 away to Chelsea.

West Brom kept their slim hopes of survival alive with a 1-0 victory over Tottenham and there were wins for Brighton, Bournemouth, Crystal Palace, West Ham, Watford and Arsenal, in what was Arsene Wenger’s final home game as manager.

There was also midweek action, as a huge relegation clash between Swansea City and Southampton saw the latter run out 1-0 winners at the Liberty Stadium.

It all but ensured Satins’ safety and relegated West Brom in the process.

Chelsea‘s 1-1 draw with Huddersfield Town was an almighty bonus for Liverpool, while Tottenham edged out Newcastle United at Wembley.

Here’s a look at the best and worst of the action to round-off a thrilling season.

One To Watch: Liverpool vs. Brighton It has all come down to this for the Reds.

A stuttering run of form has seen them win just once in their last five league games—Champions League commitments have been the main reason for this malaise—and it leaves them needing to draw with Brighton on Sunday, at worst.

Chelsea‘s aforementioned draw with Huddersfield was a real bonus, as it meant a win isn’t required this weekend against the Seagulls.

There are still understandable nerves surrounding the game, given the Reds’ ability to never do things the easy way, but they should be too strong for their opponents.

Jurgen Klopp‘s side have had a much-needed week without a game, meaning the players should be far fresher than they were at Stamford Bridge.

As was the case in the 3-0 win over Middlesbrough on the final day of last season, patience may be required, but the Reds must show belief and ruthlessness.

Missing out on a top-four finish does not bear thinking about, especially considering the healthy position they were in a few weeks back.

They will get the job done.

Ones To Avoid: Several! It is almost impossible for there not to be some meaningless fixtures on the last day of any campaign, and there are almost too many to mention this weekend.

Burnley and Bournemouth‘s clash at Turf Moor looks a shocker, with the Clarets famed for their pragmatic style and the Cherries essentially preparing to turn up with a towel and a windbreak.

Huddersfield’s visit of Arsenal is just about rescued by it being Wenger’s last match in charge—you wouldn’t bet against it all ending in tears.

Man United have been atrocious to watch under Jose Mourinho, and their home game with Watford has a dull 2-0 home win written all over it.

It will cap off one of United’s most sleep-inducing seasons in living memory, even though second place and a likely FA Cup triumph will come their way.

West Ham vs. Everton is the other fixture that really jumps out at you in the wrong way, with David Moyes and Sam Allardyce likely to ensure their respective sides end 2017/18 in typically unspectacular style.

Chelsea had found form at just the right time prior to the draw with Huddersfield, but hopefully that result has knocked the stuffing out of them.

The west Londoners deserve credit for cranking up the pressure on Liverpool of late, but they know that only three points will keep them in the top-four hunt this weekend.

Standing between them and a win are Newcastle, and while the Magpies could quite easily be on the beach, the Rafa Benitez factor could come into play.

The Reds’ brilliant former manager has little time for Chelsea, particularly after the manner in which he was treated during his brief-but-successful spell there in 2012/13, and he would love to end their Champions League hopes personally.

St. James’ Park is never an easy place to go and the home crowd could be in vocal, celebratory mood after an excellent season.

Given the intensity Chelsea are likely to play with, you would expect them to get over the line, but a home result of some kind would be no great shock.

Go on Rafa—do it for Liverpool! (All matches Sunday 3pm kick off)