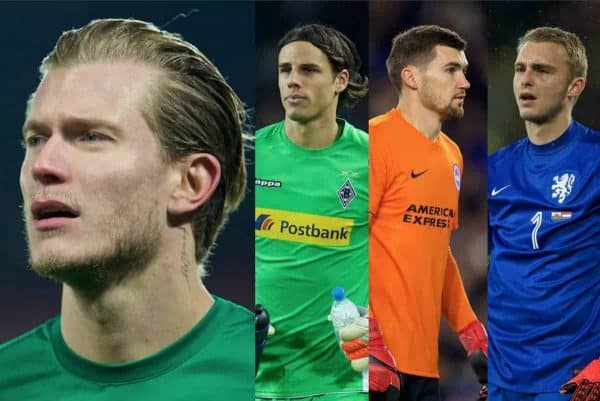 10 goalkeepers Liverpool could target to replace or challenge Loris Karius

Liverpool are likely to sign a new goalkeeper this summer, but with their current targets out of reach who else could challenge Loris Karius?

The Reds have been touted with a move for a stopper since Karius’ concussion-prompted nadir in the Champions League final, though their initial candidates have proved elusive.

Both Alisson and Jan Oblak look unlikely to make the move to Merseyside, with the suggestion being if Jurgen Klopp cannot secure a world-class alternative he could keep faith in his compatriot.

But Simon Mignolet is still expected to depart, with the Belgian needing regular first-team football after losing his place as Liverpool’s No. 1, opening up the prospect of a new arrival regardless.

If Alisson is unattainable, Liverpool will be considering a host of options either to bulk out the squad or take over as Klopp’s new first choice.

Here are 10 goalkeepers who could either replace or challenge Karius this season.

PSG stopper Areola has been touted with a move to Newcastle United with the Ligue 1 giants widely expected to sign free agent Gianluigi Buffon as their new No. 1.

The France international remains flawed, but emerged with vast potential and has developed into a reliable shot-stopper who kept 22 clean sheets in 44 appearances last season, and could be available for around £17.5 million.

Replace or challenge? It would be a gamble, but having Areola contending for the role of first choice could be the prompt Karius needs.

Casteels may be third-choice ‘keeper for Belgium, but he is a swiftly improving talent yet to reach his prime, and his strong performances last season came despite Wolfsburg’s nightmare campaign.

Standing at 6’6″ he is certainly built to be a goalkeeper, and Casteels meshes this imposing physicality with great reflexes and a command of the penalty area, refined over 112 Bundesliga appearances to date.

Replace or challenge? Casteels could arguably come in as Liverpool’s new first choice.

Having honed his craft with Basel in his native Switzerland, Sommer made the move to join Gladbach in 2014, replacing the Barcelona-bound Marc-Andre ter Stegen.

He’s reliable in the penalty area, with his shot-stopping ability particularly impressive, and though he lacks height at 6’0″ he has adjusted his approach to navigate this; he’s a Bundesliga mainstay, and his experience could be very useful.

Replace or challenge? Relations with Gladbach are fraught, but Sommer was open to a Premier League move in the past, and would be a capable replacement.

With speculation over moves for Alisson and Oblak dampening, Lazio’s emerging star Strakosha has been floated as a possible alternative by the Italian press.

It is easy to see why Klopp would be interested, with Strakosha a key factor behind his side’s title challenge in Serie A last season, having shone in big-game situations—though he can still improve.

Replace or challenge? Valued at £35 million by Lazio, Strakosha could be a reasonably priced replacement as No. 1.

Liverpool were credited with an interest in Ryan prior to his move from Club Brugge to Valencia in 2015, but he’s since arrived in the Premier League and proved his credentials at Brighton.

Ryan is an athletic, front-footed goalkeeper with great distribution, fine reflexes and a growing aerial ability, and bar his 6’0″ height he has few weaknesses.

Replace or challenge? It may be an underwhelming signing, but Ryan is primed to step up as a top No. 1.

Another goalkeeper linked with the Reds as hopes of signing Alisson faded, Cillessen would have motivation to leave Barcelona after two years as Ter Stegen’s deputy.

The Dutchman is deserving of a first-choice role at a top-level side, and possesses all the qualities required to operate behind Klopp’s high defensive line.

Replace or challenge? A surefire replacement, and arguably Liverpool’s best alternative to Alisson.

Perhaps unsurprisingly given his solid season with Burnley and the Reds’ desire to sign a ‘keeper, Pope is claimed to be on Klopp’s radar ahead of a possible £18 million move.

The England international is an excellent under-the-cosh stopper, but it remains to be seen whether he has the all-round quality required after a career that has taken in spells with Charlton Athletic, York City and Bury.

Replace or challenge? Sticking with Karius as No. 1 would be a better fit, but Pope could provide him with a welcome jolt as backup.

Five years ago Gulacsi left Liverpool having made no appearances for the club over six seasons, taking up reserve duties as Pepe Reina’s understudy.

He’s proved himself a very impressive goalkeeper since joining Red Bull Salzburg in 2013, and now with sister club RB Leipzig he’s fulfilling his potential in a title-challenging side.

Replace or challenge? From apprentice to master, Gulacsi would be ready to replace Karius.

Handanovic certainly doesn’t fit the billing as a Liverpool signing in the Fenway Sports Group era, but his proven quality could be exactly what Klopp’s side require.

Though he’s ageing, he has garnered a reputation as a world-class stopper at Inter, and he could fill the void with distinction at Anfield.

Replace or challenge? If Klopp is willing to persevere with Karius, Handanovic could arrive to allow the German to improve under the radar.

The hysteria surrounding Karius’ performance in Kyiv undermines the initial perception that Liverpool were in safe hands for years to come, with both Ward and Kamil Grabara also in the ranks.

Ward spent the entirety of last season floundering as third choice despite an eye-catching loan spell with Huddersfield in 2016/17, and his vocal presence and hulking, athletic approach should not be overlooked.

Replace or challenge? It’s debatable whether Ward could replace Karius, but he deserves to be given a chance to challenge the No. 1.