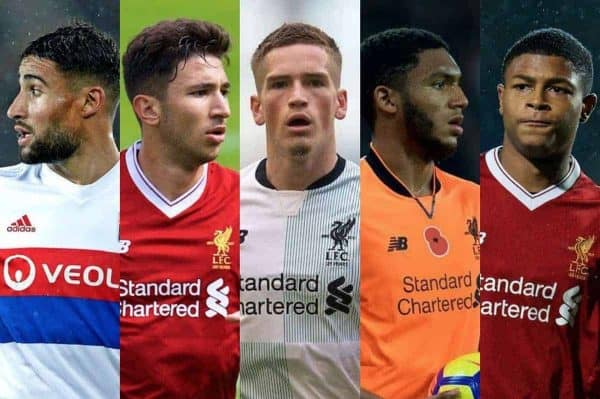 We round up the latest Liverpool news and transfer rumours on Thursday, as a host of youngsters prepare to depart the club on loan this summer.

It was claimed on Thursday morning that Liverpool could secure at least one signing within the next 24 hours, with Lyon captain Nabil Fekir and Stoke City winger Xherdan Shaqiri the targets.

Now, it is unlikely the Reds will finalise a deal for Fekir until after the World Cup, according to the Ligue 1 club’s president Jean-Michel Aulas.

“The deal is at a standstill, there is no way forward,” he told OLweb.fr.

“The deal will certainly not close during the World Cup and I do not think there is any change before the World Cup.

“We have not set a base price because we have not discussed this yet.”

However, JOE.co.uk‘s Melissa Reddy reports that, despite Aulas’ claims Liverpool “are hopeful of concluding a deal in the region of £60 million by the end of this weekend.”

“Sources in France have revealed Lyon are also privately in favour of having the player’s future resolved rapidly,” she adds.

Liverpool confirmed their first loan departure of the summer on Thursday afternoon when Ovie Ejaria signed a new long-term contract before joining Rangers for the 2018/19 campaign.

The midfielder is not set to be the only player to leave on a temporary basis either, as Goal‘s Neil Jones explained.

Jones has reiterated Rangers’ interest in both Ryan Kent and Dominic Solanke, with Leeds United also pursuing a loan move for the former.

Leeds are also seeking a deal for Spanish midfielder Pedro Chirivella, who enjoyed a productive spell with Willem II last season, while Sheyi Ojo is another expected to leave.

Finally, he adds that Marko Grujic is poised for another loan, with the Serbian midfielder on the radar of newly promoted Fulham, while Cardiff City have also been credited with interest.

No Days Off For Injured Duo

Joe Gomez and Rhian Brewster are among the Liverpool players working back from long-term injuries to be fit in time for pre-season.

Gomez has been sidelined since the end of March with ankle problems, while Brewster has been out for five months with ankle and knee injuries, with both youngsters undergoing surgery.

Despite interest from abroad, for now Brewster seems set to remain at Liverpool next season, and as he prepares to be fast-tracked into Jurgen Klopp‘s first-team setup he joined Gomez at Melwood on Thursday for rehabilitation:

Joe Gomez and Rhian Brewster both at Melwood today continuing their rehab. ? pic.twitter.com/xkvwcPpvn7

Having missed out on the World Cup and the Toulon Tournament this summer, the pair’s commitment is admirable as they bid for full fitness when training restarts on July 2.

McAllister was serving as a club ambassador, but will now be Gerrard’s assistant manager, while Beale leaves his youth development role to become first-team coach.

Culshaw served as Gerrard’s assistant with the Liverpool U18s, but becomes technical coach for the Glasgow club, and fitness coach Milsom is promoted to head of performance.

With Gerrard also setting his sights on a host of the Reds’ youngsters, this setup could prove beneficial, with Ejaria hoping to return to Merseyside next summer ready for first-team football.

But on the other hand it leaves Liverpool decidedly light in terms of academy staff, with replacements yet to be announced.

Buvac to Take Over at Fenerbahce

Turkish side Fenerbahce delivered Liverpool supporters with a blast from the past as they appointed former sporting director Damien Comolli in the same role.

Comolli endured a mixed spell at Anfield, with his transfer activity producing impressive hits and miserable misses, and this time he could be set to plunder the Reds for a big name.

Zeljko Buvac is currently not operating in his role as Klopp’s assistant manager for ‘personal reasons’, but is not expected to return to the club.

And according to Turkish outlet Ajansspor, Comolli is considering Buvac as a candidate for the managerial role in Istanbul.

They do, however, add that Arsene Wenger, Laurent Blanc and Luis Enrique are also in the frame.