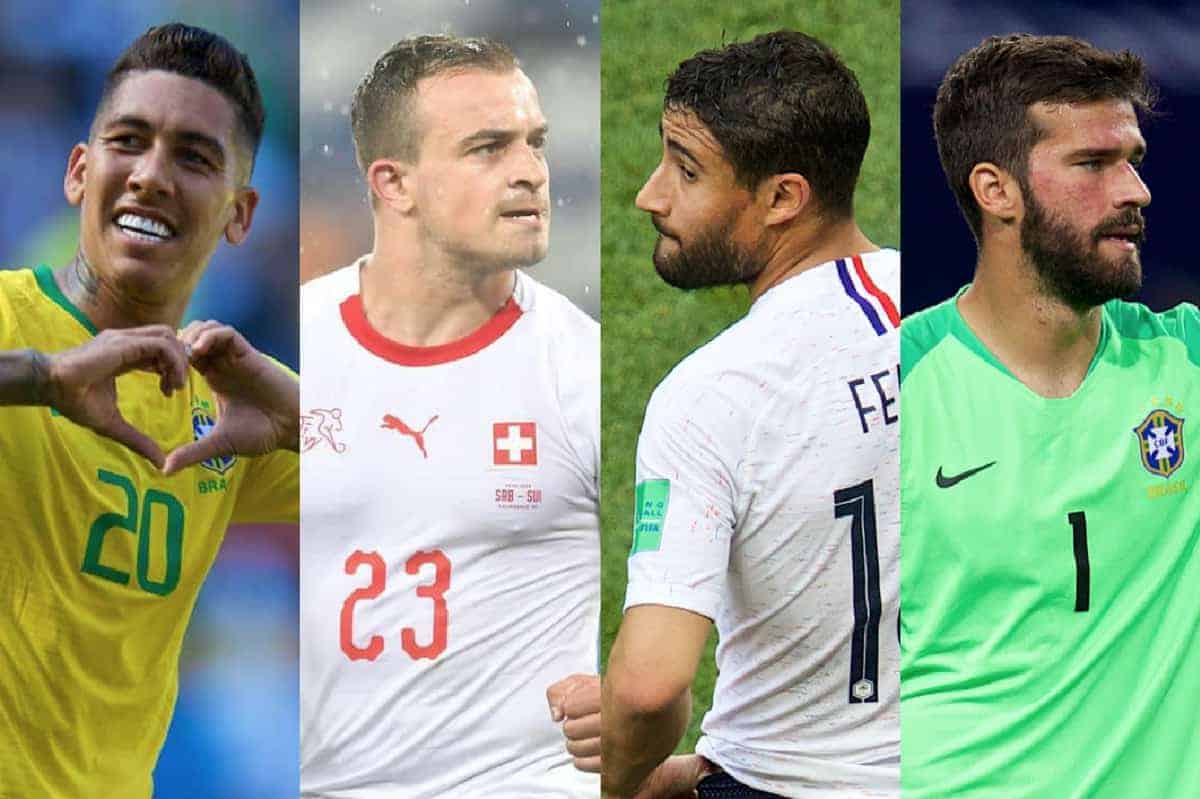 The group stage of the World Cup is over, and here’s when and where Liverpool’s players and transfer targets will be playing in the last 16.

With Friday providing a brief break from World Cup action, the last 16 gets underway on Saturday, and it promises to provide more must-watch football.

Marko Grujic, Mohamed Salah and Sadio Mane‘s exits from the tournament have cut Liverpool’s contingent in Russia down to five, but there is still a lot to look out for.

So what can we expect from the last 16, and which players should be on the radar? It remains to be seen whether Liverpool revive their interest in Lyon attacking midfielder Nabil Fekir, with stances contrasting wildly following the collapse of an initial deal.

But the 24-year-old’s performance against a struggling Argentina will still be worth keeping an eye on, particularly following his impressive cameo in the 0-0 draw with Denmark last time out.

Elsewhere, if Didier Deschamps restores Benjamin Pavard to right-back his display could be of interest, though the Stuttgart defender has flattered to deceive out of position so far.

Argentina have struggled for consistency so far in Russia, but overcame Nigeria in the last game of Group D and will remain a threat on Saturday. When: 7pm (BST), Saturday, June 30
Where: Fisht Olympic Stadium
How can you watch it? ITV 1, ITV Hub

The evening clash on Saturday will largely be noteworthy for Liverpool supporters due to the involvement of a pair of former players, namely Sebastian Coates and Luis Suarez.

Uruguay dominated Russia in their final Group D game, and though like Argentina they have been far from impressive throughout they could be hitting form at the right time.

From Portugal, the Reds have been tenuously linked with free agents William Carvalho, Bruno Fernandes and Gelson Martins, while Paris Saint-Germain’s Goncalo Guedes has been floated as an alternative to Fekir. When: 3pm (BST), Sunday, July 1
Where: Luzhniki Stadium
How can you watch it? BBC One, BBC iPlayer

Again, ex-Reds will be on the radar in this interesting clash that pits one of the tournament favourites against its host.

Neither Pepe Reina or Iago Aspas are likely to start for Spain but it was the striker’s last-minute effort that sealed a 2-2 draw with Iran in the last game of Group B, so Fernando Hierro may be tempted to include him.

Marco Asensio is keeping his focus on the World Cup amid speculation over his future, and while claims of Liverpool’s interest seem farfetched he does fit the mould. When: 7pm (BST), Sunday, July 1
Where: Nizhny Novgorod Stadium
How can you watch it? ITV 1, ITV Hub

It was Dejan Lovren‘s handball that gave Iceland brief hope of booking their place in the last 16 at the expense of Argentina, but this served as a mere blemish on a strong campaign so far.

The centre-back will be the first of Liverpool’s World Cup representatives in action in the knockout stages, and he will be hoping to continue Croatia’s unbeaten run against Denmark.

Mateo Kovacic could serve as an interesting alternative for the Reds if a move for Fekir is not resurrected, while Denmark’s Simon Kjaer—who comes from a family of Reds supporters—is another to watch. When: 3pm (BST), Monday, July 2
Where: Samara Arena
How can you watch it? BBC One, BBC iPlayer

Brazil manager Tite’s reluctance to field Roberto Firmino despite his impressive cameo performances so far this tournament has baffled many Liverpool fans.

Man City striker Gabriel Jesus has been preferred, and to his credit has interchanged with the likes Philippe Coutinho and Neymar to reasonable effect, but Firmino is certainly deserving of inclusion.

The Liverpool Echo‘s James Pearce has reiterated Liverpool’s interest in Alisson, and though a move is unlikely this summer his performances between the sticks will still pique interest. When: 7pm (BST), Monday, July 2
Where: Rostov Arena
How can you watch it? BBC One, BBC iPlayer

Simon Mignolet has, as expected, continued his peripheral club role on the international stage, serving as an able deputy to Belgium’s No. 1 stopper Thibaut Courtois.

Victory for Roberto Martinez’s side over England on Thursday night ensured a comfortable clash with Japan, though they would be remiss to underestimate the Samurai Blue. When: 3pm (BST), Tuesday, July 3
Where: Saint Petersburg Stadium
How can you watch it? ITV 1, ITV Hub

The Independent have claimed a deal to bring Stoke City‘s Swiss winger Xherdan Shaqiri to Anfield is likely to go ahead after the World Cup.

Shaqiri has already scored once and assisted another in Russia, and though his influence has been sporadic he has provided Switzerland with a talisman in attack.

His efforts will no doubt be crucial against a surprisingly strong Sweden side featuring Emil Forsberg, with another former Liverpool target, Manuel Akanji, key in the Swiss defence. When: 7pm (BST), Tuesday, July 3
Where: Spartak Stadium
How can you watch it? BBC One, BBC iPlayer

Trent Alexander-Arnold capped another milestone in his burgeoning career with his first competitive start for England in Thursday’s defeat to Belgium—an unfortunate night, but one he will cherish nonetheless.

The right-back is likely to return to the bench for England’s last-16 clash with Colombia on Tuesday, but Jordan Henderson is expected to be restored at the expense of Eric Dier.

Barcelona centre-back and oft-touted Liverpool target Yerry Mina will be a key threat for Colombia from set-pieces, while another possible signing, Jack Butland, will warm the bench for the Three Lions.