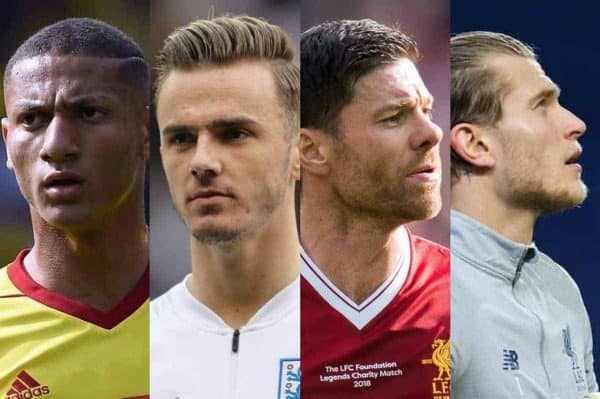 We round up the latest Liverpool news and transfer rumours on Sunday, with the Reds linked with moves for two departing Watford players.

With the World Cup kicking off on Thursday, the Reds’ transfer activity has slowed down, with the likes of Alisson, Nabil Fekir and Xherdan Shaqiri all turning out in Russia.

Two players who aren’t at the tournament but have been linked with moves to Anfield, however, are Watford duo Abdoulaye Doucoure and Richarlison.

And according to the Mirror, the Hornets could look to sell the pair this summer as they capitalise on their impressive performances in 2017/18.

Doucoure was touted as a target for Jurgen Klopp‘s side in February, and the following month claimed “it would be a dream” to join Liverpool—though he is said to be valued at £40 million.

Meanwhile, Brazilian forward Richarlison could also leave Vicarage Road, and has been mentioned as a possible signing too.

Another player mooted as a target for Klopp is Norwich City midfielder James Maddison, with the 21-year-old midfielder expected to depart Carrow Road this summer.

Maddison was on the Reds’ radar in 2015, prior to his move to East Anglia from Coventry, and was linked again in April, with the Canaries valuing him at £30 million.

If Liverpool are to approach Norwich, though, they made need to move fast, as the Guardian report that both Leicester City and Southampton have made bids for the youngster.

Both offers are below Maddison’s rumoured price tag at around £20 million, but this may still tempt the Championship side to sell as they weigh up their options.

Everton and West Ham are also credited with an interest in Maddison, though perhaps tellingly there is no mention of Liverpool.

One player who is not a target for the Reds despite claims earlier this week is Flamengo attacking midfielder Lucas Paqueta.

Reports in Brazil had suggested Paqueta could make the move to Merseyside following the collapse of Liverpool’s pursuit of Fekir, but the Mirror‘s David Maddock has moved to quash speculation:

Despite widespread reports in Brazil, @LFC have zero interest in Lucas Paqueta. The 20 year old Brazil U20 international is being touted as an alternative to Fekir. Liverpool say that's nonsense.

This comes as little surprise, with Paqueta not yet possessing the quality to serve as an alternative to Fekir, at just 20 and having made 41 senior appearances in his career.

The hope remains that a deal for Fekir can be revived, as despite reservations over his fitness following a medical earlier this month he is a proven, top-level talent who could elevate Klopp’s side further.

Despite suffering defeat in the Champions League final and failing to improve on a fourth-placed finish in the Premier League, Liverpool’s 2017/18 can be considered a success.

But for Xabi Alonso, Klopp’s side need to make a step forward this season if they are to fulfil their potential.

Speaking to LiverpoolFC.com, the ex-Reds midfielder outlined his belief in how the Reds can develop further, and how Klopp should utilise the transfer market:

“The next step is not securing top four, it is challenging for the title and that’s the big one that probably is the most difficult one.

“We know Liverpool, they can beat anyone, but they need to find that consistency to be regular in the whole season. We were close and we didn’t make it—hopefully they can make it.

“I think they need to not just have a ‘short’ team. Not 14 players—you need to list 20, 22 players to be able to cope with so many games.

“Each game, each point is so important so you need to have the whole squad connected, ready to perform at the highest level, but with the principles and the idea very clear. That can’t change from game to game.

“For me the important thing is the team. The team is already built.

“After, for sure you need to bring new players, you need to add new, good things, but that doesn’t disturb what they have already been doing.”

Loris Karius‘ concussion in the Champions League final has rightly opened up debate about the approach to head injuries in football.

Encouragingly, it has stressed the importance of a more sensitive stance, and ahead of England’s World Cup opener against Tunisia on Monday night, Gareth Southgate’s side are taking further precaution.

According to the Mail, the Three Lions will call upon an extra pitch-side doctor in Russia to avoid neglecting any possible concussions.

“Dr Jonathan Hanson has access to TV clips and slow-motion replays, which is allowed under FIFA protocols, so team doctor Rob Chakraverty can be alerted to any possible concussion,” Rob Draper reports.

Morocco winger Nordin Amrabat sustained a concussion in Friday’s 1-0 defeat to Iran, and the 31-year-old will miss their clash with Portugal on Wednesday.