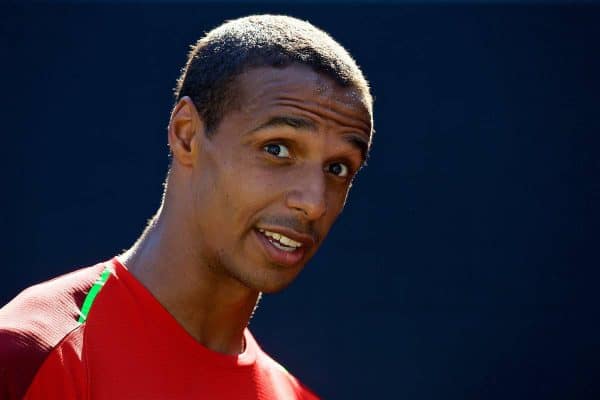 Joel Matip is returning to Melwood to undergo treatment for a thigh injury picked up in the first friendly of Liverpool’s pre-season tour of the United States.

Matip limped off the field and straight down the tunnel just 21 minutes into the Reds’ 3-1 defeat to Borussia Dortmund in Charlotte.

The 26-year-old was making his third appearance of the summer after recovering from another thigh injury that required surgery back in April, which ruled him out for three months.

But Liverpool have confirmed he won’t be adding to his tally of outings against either Man City in New Jersey or Man United in Michigan, as he is on his way back to Merseyside.

However, the club have stressed the issue “is not considered to be a long-term concern,” though given Matip’s previous fitness problems this is up for debate.

The Cameroonian has missed 36 competitive games through injury since joining the Reds from Schalke on a free transfer in 2016, depriving Jurgen Klopp of a reliable centre-back presence.

Combined with Dejan Lovren and Joe Gomez‘s frequent absences, Klopp has struggled to maintain a strong core of options at the heart of defence.

This will increase the workload on Nathaniel Clyne as, with Gomez likely to partner Van Dijk as part of Klopp’s first-choice defence in the States, the 27-year-old may be required to play a full 90 minutes.

Furthermore, if Matip is sidelined for an extended period, this could spill into the upcoming campaign, with Lovren’s post-World Cup holiday reducing his chances of starting against West Ham.

Whether Klopp opts to dip into the transfer market for another centre-back, with none of Matip, Lovren or Gomez wholly dependable, remains to be seen.