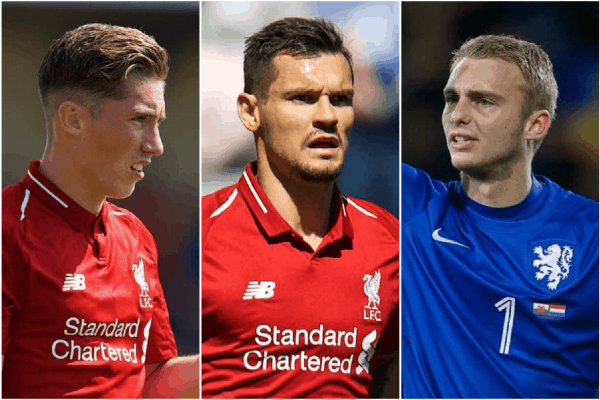 The World Cup is over and focus shifts back to domestic matters and the upcoming campaign for Liverpool FC.

The battle to sign Reds winger Harry Wilson on loan looks to have taken in over a dozen clubs now.

Teams such as Swansea and Norwich City have been keen on signing him, but the Mirror report Derby County are close to a deal.

Wilson was left out of the Reds’ 0-0 draw at Bury over the weekend, with Jurgen Klopp admitting a loan switch was close.

His long-term future remains with Liverpool though, after a new deal was signed last week.

Lovren not impressed by France

Dejan Lovren ended on the wrong end of a 4-2 scoreline in the World Cup final on Sunday.

Croatia were beaten by France despite playing largely well, and the centre-back was unimpressed with the victors’ approach.

“They had their one tactic and you have to respect it,” said Lovren, according to BBC Sport. “They waited for their chance and scored. They played every game like that.

“I’m disappointed because we lost the game but played much better football than them.”

The defender is set for a three-week holiday now before returning to Liverpool a week before the new Premier League season gets underway.

The Reds’ U23 side will again take part in the Premier League International Cup competition this term.

A 24-team tournament, half are Premier League 2 teams and the other half are from club academies around Europe, with a group stage and knock-out format. The Reds reached the semi-finals last season, losing to Porto B.

This year, Liverpool will face Hertha Berlin, Villarreal and Swansea City in the group stage.

Neil Critchley will again lead the team as U23 boss.

The World Cup might be over but the international tournaments are still ongoing.

This week, the U19 European Championships get underway and the Reds will have one representative in the England team, with left-back Adam Lewis in the squad.

The tournament takes place in Finland and England are the reigning holders from last year.

Lewis could first be in action on Tuesday, with England facing Turkey.

The first of two bids that Liverpool have seemingly made—though not yet reported by any hugely credible source.

French Canal+ journalist Romain Collet-Gaudin tweeted on Monday that the Reds have made an offer for Barcelona goalkeeper Jasper Cillessen, but included no details on fee or whether it was accepted.

By contrast, the Mail’s Dominic King rejected the notion an offer had been made.

Want to know more on Cillessen either way? We’ve got you covered right here.

Can the Vida links please stop

Dejan Lovren in dreamland: Liverpool want to pair him at the back with international team-mate Domagoj Vida.

Perhaps something got lost in translation when Reds fans were talking about pairing up Virgil van Dijk with Matthijs de Ligt?

Anyway, the Mirror cite Turkish reports as suggesting the Reds have gone back in with a new offer for Vida.

£20 million is the price this time, with Atletico Madrid and Sevilla also interested. Besiktas want £30 million. Let’s end the ‘bidding war’ here, then.