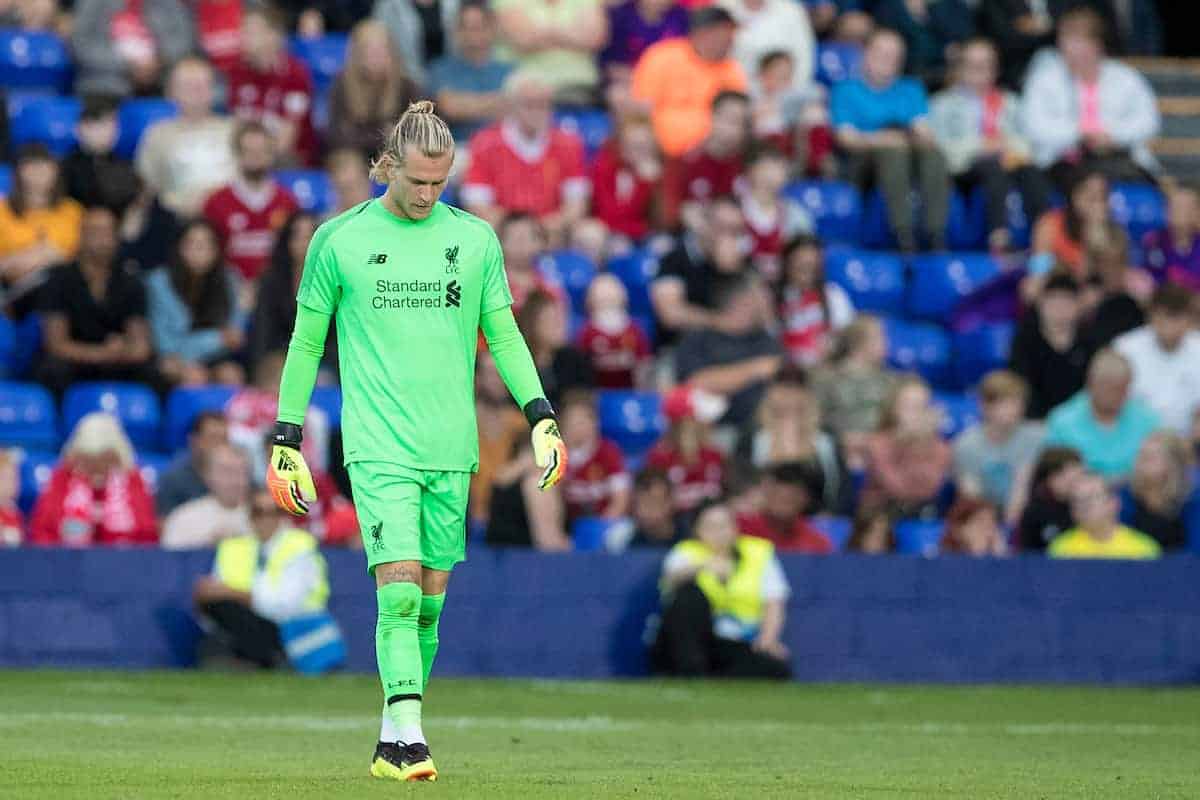 Loris Karius once again found himself in the spotlight for all the wrong reasons as Liverpool defeated Tranmere Rovers at Prenton Park.

The Reds took on their League 2 opponents on Tuesday evening, following Saturday’s 7-0 victory at Chester.

Jurgen Klopp‘s side flew into a 3-0 lead in the first-half thanks to goals from Rafa Camacho, Sheyi Ojo and Adam Lallana.

A poor second-half performance from an entirely changed XI was disappointing, however, and mistakes from Karius and Pedro Chirivella allowed Tranmere to make the scoreline respectable.

Kid could have the best save % in the league, 5 assists from his great distribution. 24 conceded all season, drop a cross in the 36th league game… death threats all over again.

There is no bigger advocate of his, but I said it after the Benzema scored. He has to be sold

The media are going to have a fun time about our keeper. Karius will have more nightmares and this was only a friendly. Right cock up for their 2nd by Milner and the youngster.

My opinion on Karius not being good enough for us wasn’t based on his calamitous errors in the champs league final ..his latest error in a meaningless friendly won’t enhance my opinion either ..the lad simply needs to move on imo #LFC #Karius

As much as he'd decent spells, and i've stuck up for him, Karius was always swimming against the tide with LFC. Broke his hand in his first pre season, the Neville diatribe, loss of form. It's just not worked.

Karius deserved a pre-season to show whether or not he was cut out to be LFC's number 1. However, he continues to show time and time again that he is not good enough. Time for a change.

Karius’ confidence is done for and won’t be repaired. At least not to a level acceptable for a Liverpool goalkeeper. You don’t recover from what he did in Kiev. Klopp has to see that

Karius is far too much of a risk for me. Heading into the new season with him as No1 would be like playing Russian roulette. The guy could lose his mind at any moment. Fuck that shit, especially since Ward is clearly not rated much, & we want Mignolet gone, too.

"Give it to Wardy till end of season."

We need to be ruthless. We aren't running a charity here. Karius needs to go somewhere else and get a fresh start, because we can't sacrifice another season because of inadequate goalkeeping.

Terrible 2nd half for #LFC. The least said about that the better. Pre-season friendly and all, but there's going to be one player who'll get the headlines again and it's time for the manager and staff to pull the trigger.

Some were frustrated by Liverpool’s performance, but certain individuals were praised……

Really disjointed second half for #LFC, not aided by Karius' error…thought only Jones and Wilson came off with much credit, but it's only pre-season.

First half we looked solid! Second half…..yeah lets forget that? on a plus….how sharp is @officialAL20 looking?? cant wait to have him back in the squad at full fitness!?#LFC

“Jeez, that second half was hard work. Again, I saw bits and pieces from Wilson and Jones that I liked the look of. Nice bit of energy from Clyne down the right. Little else.”

– Strictly Armchair on the forums.

Very poor second half performance from Liverpool. Good workout again though which is the main thing. First half team great. Lallana the stand out performer for the reds #LFC

I get criticised for being overly harsh on Origi, but what do you expect when he's dreadful on such a regular basis? No brain whatsoever.

FT 3-2 Sloppy second half highlighted by a bad mistake from Karius who is already under the microscope.

Positives from that first 45 though. Ojo very lively.

All about fitness despite the inevitable questions on our keeper situation.#LFC