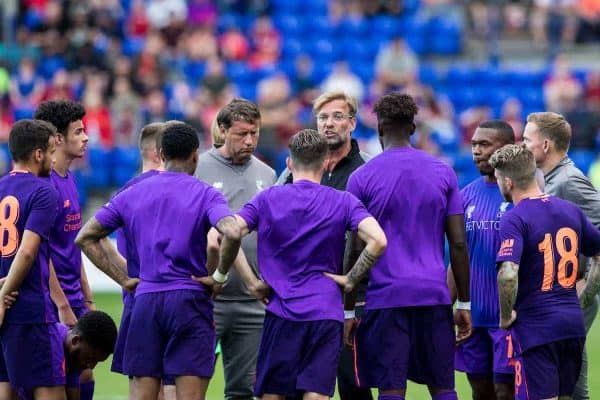 Liverpool will play their third friendly of the summer on Saturday (3pm) as they take on League One side Bury, with Jurgen Klopp sure to make plenty of changes again.

The Reds have so far seen off Chester, 7-0, and Tranmere, 3-2, in their opening pre-season games.

Two more remain in the quartet of fixtures against north-west opponents, with Bury sure to offer a step-up in terms of quality, having been relegated from League One to League Two last term.

Klopp will hope for an improved showing on the second half performance against Tranmere, where the Reds shipped two goals having earlier gone three clear.

Joel Matip should return for his first involvement of the summer, while Dutch duo Gini Wijnaldum and Virgil van Dijk are also back in training.

All players need to build up their pre-season fitness, but the first couple of games were an opportunity for some younger players to impress, too.

Now, as more seniors return, the lineup should get gradually stronger, as well as early season form perhaps starting to see the manager adjust his thinking.

Danny Ward has been the more impressive goalkeeper thus far and may get a chance to stake a claim as the regular No. 1, so a start here would be a further boost to his confidence.

The defence in front of him should be boosted by Virgil van Dijk‘s first outing, while full-backs Nathaniel Clyne and Andy Robertson have been impressive performers so far.

A battle for the other centre-back spot will be on the cards all season, but this is an opportunity to see Joe Gomez alongside Van Dijk – a pairing many Reds fans have hoped to see with regularity.

In midfield, the same trio starts here as against Tranmere.

Liverpool dominated the first half and each of Fabinho, Naby Keita and Adam Lallana showed some good touches and ability to win the ball back quickly.

Having signed a new contract with the club, Harry Wilson will be continuing his attempts to impress the boss and remain involved once competitive action gets underway.

Alongside him in attack, both Dominic Solanke and Ryan Kent have work to do after low-key starts to the summer, one Kent goal aside.

A 4-3-3 system suits the players on show and should allow plenty of dominance in the middle third once more.

A full 11 changes can be expected at half-time once again, as Klopp gives his full squad more minutes on the pitch.

Loris Karius needs to have a steady game more than anyone else in the squad, perhaps, while the defence benefits from another senior presence.

Joel Matip can partner Ragnar Klavan, both hoping for more game time this term, while Rafael Camacho has been an interesting outlet from right-back. Alberto Moreno will again play the opposite flank.

A switch to 4-2-3-1 in the second half can see James Milner and Ben Woodburn partner up centrally, allowing the youngster in particular the chance to showcase taking responsibility in a key position.

Daniel Sturridge will play just off Divock Origi once more, with Sheyi Ojo and Curtis Jones both showing real flashes of ability in pre-season so far from wider areas.

As the seniors return, more of the younger players will have to make way, and that’s likely the case for Nat Phillips despite two reasonable outings at centre-back.

Pedro Chirivella, too, is a probable casualty, given he’s been playing out of position anyway and Matip has returned.

A third goalkeeper might get a few minutes on the pitch if Klopp decides it’s more worthwhile than having a half each for Ward and Karius, but it’s not probable.

Finally, Wijnaldum may get a run-out in any midfield role, but with just a few days’ training behind him and the centre of the park being a more demanding position, he could have to be a little more patient.

Klopp has already announced that Sadio Mane and Mohamed Salah will head off on the tour of USA with the club, while Roberto Firmino will make the training camp in France afterward.

None of the Belgian, Croatian or English World Cup contingent will play a part in the Reds’ pre-season preparations.

Alex Oxlade-Chamberlain and Rhian Brewster remain sidelined through long-term injury, while Danny Ings took a knock earlier in pre-season too.

The Reds have plenty of cover and no need to rush back players for these fixtures, though the squad will doubtless be thinned somewhat over the coming weeks as several exit on loan or on permanent deals.