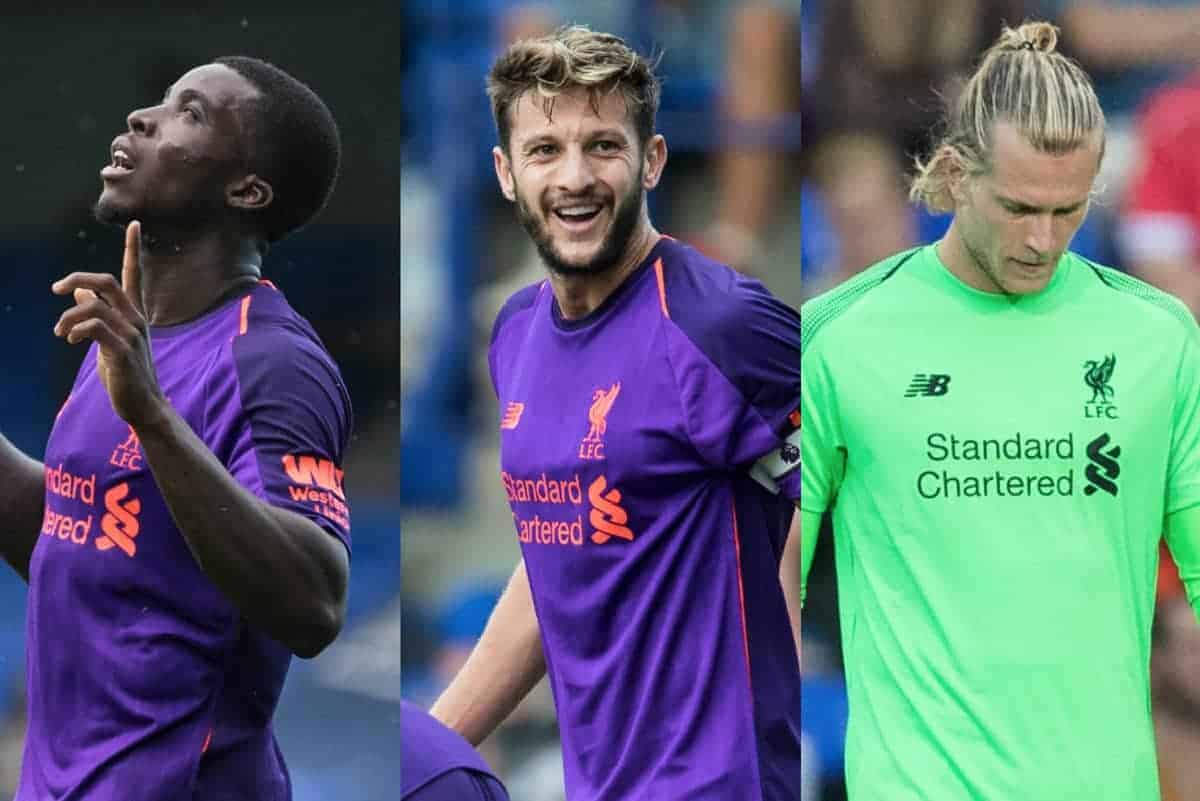 Liverpool’s second pre-season game of the summer ended in a victory, but it was less comfortable than it might have been after a poor second half.

The Reds took on near-neighbours Tranmere Rovers, recently promoted back into League Two, and took command with a three-goal lead before half-time.

A sloppy second 45 minutes, however, saw Rovers net twice on the back of multiple errors from the Reds back line, and Jurgen Klopp‘s team didn’t add to their own tally.

The 3-2 win makes it back-to-back victories against their lowest-ranked opponents of the summer, but several players might feel this was an opportunity missed to make their point to the boss. All the best performers, it’s fair to say, were on show in the first 45 minutes.

Pick of the bunch was arguably Andy Robertson; the Scottish left-back was at his aggressive, marauding best, winning tackles, combining brilliantly with quick, one-touch passes and delivering a couple of delicious crosses into the box.

He looks sharp, fit and absolutely buzzing already and there’s little doubt he’ll be one of the first names on the teamsheet this season.

Sheyi Ojo also deserves praise, with his skill and pace being put to good use from the right of the front three. Ojo created one and scored another, showing the kind of productivity required from any young hopeful in those forward roles if they are to catch Klopp’s eye for the season ahead.

After Harry Wilson netted twice against Chester, Ojo produced a similarly telling display here, and his interplay with impressive teenager Rafa Camacho was one of the key features of the first half.

Finally, Danny Ward also upped his claim for action this season, producing a great one-handed save low to his right before also clawing away a dangerous corner.

His footwork was good and, despite largely being an onlooker for the match, he did what he needed to with absolutely no fuss. By contrast to Ward’s good 45 minutes, Loris Karius had the sort of runout he could have done without.

Having already sent a kick straight out to an attacker, Karius was at fault for Tranmere’s first goal: he spilled a fierce, but routine, shot from a free-kick straight into the path of an attacker, who scored.

Karius was also involved in a mixup with Nathaniel Clyne soon after and was easily beaten for the second Tranmere goal.

In attack, Dominic Solanke struggled with his touch, his holdup play and also missed a golden chance to score from just six yards out.

Divock Origi wasn’t much better after the break, while youngsters Ryan Kent and Pedro Chirivella might well have wasted their last chance to impress. As it is pre-season, it’s to be expected that some players will be up-and-down somewhat, and that was the case for two in midfield.

Fabinho looked in cruise control mode for most of the first half, spraying passes around from in space and winning back the ball easily at times.

But he also pulled out of a couple of tackles, was bypassed with a dribble and sent some errant balls out wide—he still has to get up to speed with his team-mates.

Adam Lallana, too, was perhaps the most heavily involved player in the first half, but alternated between great and abysmal choices and execution with his end product.

Some fantastic buildup play down the left channel was ruined by his final pass, but he also turned the Tranmere defenders inside out at times.

Then, he struck a good third goal for the Reds…but also missed a very easy chance at the near post and should have assisted Solanke for a tap-in, wildly overhitting a pass out of play instead. Truthfully, there wasn’t much to admire from the Reds after the break, despite long spells of possession.

Perhaps it was the last few days of pre-season work catching up with them, or just a game where the lack of cohesion between seniors, youngsters and players out of position simply didn’t work.

Either way, Klopp will perhaps feel only a small handful of his second-half side did themselves justice.

Daniel Sturridge again showcased his great ability on the ball, looking a comfortably better player than anyone else out there, but it was mostly in deep areas.

He picked the ball up inside his own half at times, was happy to turn quickly and spray passes wide, but didn’t really see any chances fall his way.

Playing as the deeper of two forwards his link play was good, but he wasn’t a threat. Curtis Jones again showed neat touches, good footwork and a creative side to his game, though his end product was lacking.

Tactically Jones also impressed, playing as a No. 8 in a three-man midfield when the Reds lost possession but filtering wide left, allowing Origi to move centrally, when the Reds had the ball.

And, finally, from right-back, Clyne again showed he’s approaching top fitness level and his surging runs down the flank were a feature of the first half.

The Reds will certainly need him to keep that form up this term, putting pressure on and helping to improve Trent Alexander-Arnold.

Small steps forward from the Reds on this occasion, but it won’t matter once the real action gets underway.

Apart from, of course, to those who won’t be around for much longer on account of these missed opportunities to impress.