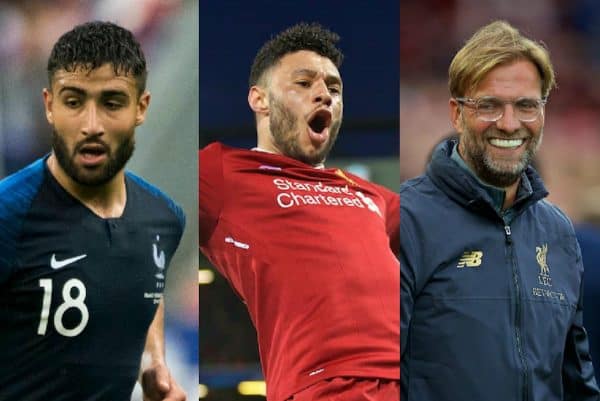 The end of the working week is edging closer – here’s a round up of the latest Liverpool news and transfer rumours on Thursday.

Nabil Fekir’s on-off move to Liverpool was one of the biggest talking points of the summer, with a transfer eventually not materialising.

Having been so close to a dream move to Anfield – a knee problem identified in his medical put paid to it – Lyon manager Bruno Genesio admits his captain is not at his happiest right now.

“It is never easy accepting this kind of situation, when you are very near to signing for a club where you want to go,” Genesio told reporters.

“Where you want to reach another level and to give a boost to your career.

“But as I said, it could have been worse for him. He is at Lyon, at a strong club, he is captain of a team who plays in the Champions League.”

Alex Oxlade-Chamberlain is currently in Hollywood working on his recovery from injury, with the midfielder set to miss the entire 2018/19 season.

The 25-year-old posted a video of his gruelling training programme, as he works on strengthening the knee he ruptured against Roma in April.

He joked that he was trying to grow his “chicken leg”, with goblet squats and straight leg deadlifts part of the regime.

The injury was a cruel blow to a player at the top of his game – fingers crossed he makes a full recovery.

The Liverpool Echo report that local residents are growing concerned about new plans for Anfield, with two planning applications submitted by the club with a view to holding 10 music concerts a year at the ground.

One unnamed local spoke honestly about the situation, saying:

“We are very aware that we live near a football ground – many of us have done for all of our lives.

“But this isn’t football – we are talking about music concerts and I would like to know if other people would like 60,000 people outside their homes at 1 in the morning.”

There is a middle ground between keeping locals happy and Liverpool’s revenue being increased; hopefully a happy balance will be found.

An Evening With Klopp

Jurgen Klopp is one of the most charismatic figures in the modern game, someone it would be a pleasure to spend time with.

The LFC Foundation, Liverpool’s official charity, have announced that there will be “a special evening” with Klopp at Liverpool Cathedral on November 19.

The Liverpool manager will partake in a Q&A session and those who attend will be treated to a three-course meal and a charity auction.

Find out more about the event HERE.

The Colombian defender joins fellow Reds hopeful Taiwo Awoniyi at the club, after the Nigerian moved there last month.

It is worth noting that neither club has confirmed the news yet, however.

Goal.com have since reported that Arroyo has completed a medical at the Belgian side and should join this weekend.

Arroyo had been plying his trade with Mallorca B between January and June, immediately being loaned to the Spanish side after joining Liverpool from Fortaleza CEIF at the start of the year.

Liverpool already have Taiwo Awoniyi on loan at Gent, who are hoping to seal a place in the Europa League group stage. They face Bordeaux on Thursday night in their play-off first leg, which Awoniyi will feature in.

Klopp Sticks Up For Ozil

Mesut Ozil retired from international duty after the World Cup, with the Arsenal man citing ‘racism and disrespect’ as the reason, following criticism for meeting with Turkey president Recep Tayyip Erdogan.

In an interview with Sport 1, Klopp stuck up for his compatriot:

“I know Ilkay Gündogan very well, I know Emre Can and Nuri Sahin very well. I do not know Mesut so well, but I would like to take him home. I do not doubt these guys at least about their loyalty to our homeland.

“The difference is that they just have diversity. Where is the problem? That’s beautiful. Cultural diversity, we all thought it was really cool around the 2006 World Cup. I saw these fantastic commercials where the parents of Gerald Asamoah and Mario Gomez had a barbecue party together.

“We all sighed for how great that works. And now two guys are seduced by a politically quite intelligent people to a photo, and then have relatively few opportunities to say the one hundred percent right.

“That’s why I find this discussion hypocritical. Bad things happened because people were not informed properly.”

Klopp is an absolute class act.

Yes, you read that correctly – Real Madrid have a deal in place to sign former Liverpool corner supreme Iago Aspas, according to El Chiringuito de Jugones.

In fairness to the Spaniard, he has come a long way since his poor spell at Anfield, in which he scored just one goal in 15 appearances.

It’s still a rumour that has come from nowhere, though.