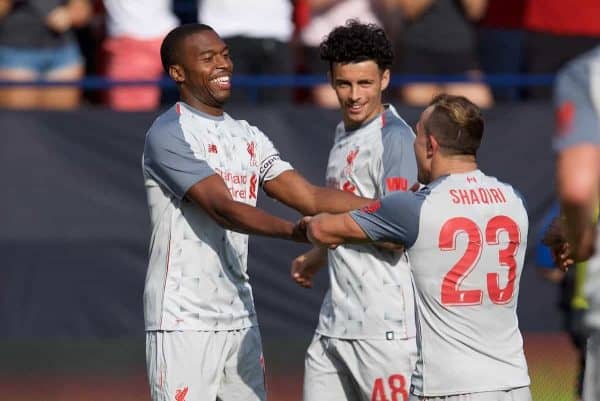 Liverpool’s last game of the summer is at home to Torino on Tuesday night, as Jurgen Klopp makes his final preparations for the new season.

The Reds face their ninth game of a productive pre-season, with the Serie A side making the trip to an expectant Anfield.

Liverpool thumped Napoli 5-0 in Dublin on Saturday and they will again be resounding favourites as they look to finish off their summer in style.

West Ham head to Merseyside on Sunday as Klopp’s men open their Premier League account, with the manager facing a few selection dilemmas ahead of the game.

Here’s a look at how Liverpool could line-up against Torino, giving us an idea of the Reds’ XI this weekend in the process.

The biggest issue facing Klopp is whether to go with his strongest available team, with the West Ham game looming large on the horizon.

On one hand, keeping momentum up and improving the fitness of players is paramount, but the risk of losing a key man to injury is there for all to see.

There is a middle ground that the German is sure to find, considering the meeting will arrive just 72 hours after the Reds last played.

Alisson is a certainty to start in goal, following a confident debut at the weekend that saw him keep a clean-sheet and display his ball-playing ability.

Klopp has stressed the importance of giving new signings an early chance to play at Anfield before the season begins, meaning Fabinho, Naby Keita and Xherdan Shaqiri should all feature prominently, too.

Fabinho didn’t start against Napoli so a return for the Brazilian is to be expected, especially with Klopp hinting that he needs more game time to get up to scratch physically.

Shaqiri could switch to a midfield role after coming on as a striker on Saturday, looking to link midfield and attack as he did on his debut against Man United.

Virgil van Dijk is vital to the side, considering defensive absences elsewhere, and he should resume his partnership with Joe Gomez to help guide the youngster.

Trent Alexander-Arnold might not be ready for the West Ham game but handing him a first start of the summer makes sense on Tuesday, with Nathaniel Clyne rested.

Andy Robertson should be fine to feature again on the opposite side of defence.

Liverpool’s front three of Mohamed Salah, Sadio Mane and Roberto Firmino all begun proceedings against Carlo Ancelotti’s side, but Klopp might also want to see Sturridge get more action after a very positive summer.

Klopp has hinted about doing some “magic things” with his formation for Tuesday’s game, which could make for compulsive viewing.

There is the option of him going with three at the back—something that occurred from time to time last season, most notably in the 5-1 win away to Brighton.

But the boss could also look to switch the alignment further upfield, while rotating a couple of his defenders.

Nathaniel Phillips has impressed during pre-season and could fill in if Klavan isn’t fit, but the Estonian should be available. He could go head-to-head with Gomez for a spot in the team at the weekend.

Robertson, much like Clyne, may be kept out of the firing line ahead of the weekend, with Alberto Moreno given a chance to showcase his talent again, following his peach of a strike at the Aviva Stadium.

Fabinho and Keita as a midfield double pivot might take some time to gel, but there’s no better time to do so than in a friendly.

Firmino is adept as a No.10 when required, so giving the Brazilian a chance to dovetail with an in-form Daniel Sturridge is an exciting proposition.

They are two footballers of immense natural talent who could easily form a telepathic understanding.

Then Salah and Mane might be expected to play part of the game each, keeping each star sharp without overworking them, while Shaqiri gets a chance on each flank.

Adam Lallana will also get some game time if he is passed fit, while James Milner and Gini Wijnaldum will again have plenty to offer as potential replacements for Fabinho and Keita.

The likes of Rafa Camacho, Marko Grujic, Curtis Jones and Dominic Solanke will want to prove their worth if any minutes come their way.

It’s all about fine-tuning plans now for Klopp, and getting the balance right between leaving out too many or too few West Ham starters.

We will be able to get a good idea of Sunday’s starting lineup simply by looking at who the 51-year-old fields from the start against Torino.