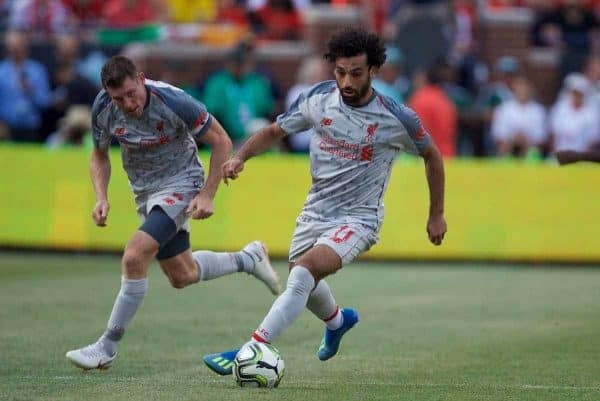 Liverpool face Napoli at Dublin’s Aviva Stadium on Saturday evening, in what is the Reds’ penultimate pre-season game of the summer.

It has been an undoubtedly positive pre-season for Jurgen Klopp and his players, who have lost just once in seven games and played some superb football along the way.

The recent victories over Man City and Man United in America were particularly impressive, with new signing Xherdan Shaqiri scoring an outrageous overhead kick against the latter on his debut.

It is now just one week until the start of the Premier League season, giving Klopp very little time to fine-tune his plans before the visit of West Ham on August 12.

Saturday’s match is about continuing to integrate new faces, as well as welcoming back key men from holiday and keeping the levels of intensity and quality high.

The Reds will come up against an impressive Napoli outfit now managed by Carlo Ancelotti, so they will have their work cut out.

Liverpool’s Irish support will be in great voice at the Aviva Stadium, on what should be another memorable pre-season outing.

Having become the most expensive goalkeeper of all time last month, after moving to Anfield from Roma for £65 million, Alisson will make his Liverpool debut on Saturday.

It will be exciting to see the Brazilian in action for the first time, with so much expected of him in a Reds shirt.

Meanwhile, fellow new signing Naby Keita should return to action after missing the wins over City and United with a neck injury.

Trent Alexander-Arnold and Roberto Firmino returned to training earlier this week and the pair will feature at some point in the evening.

We will also get another chance to see Shaqiri in action, with the Swiss endearing himself to his new supporters after that stunning strike against United.

Adam Lallana and Marko Grujic had specially tailored sessions on Thursday and have been left out of the weekend action. Danny Ings is also out.

Joel Matip is still unavailable with a quad problem, as well as a sore hip flexor.

Napoli represent an attractive-looking opponent for the Reds this weekend, having grown to be one of Europe’s more respected ball-playing sides in recent years.

They came agonisingly close to a first Serie A title since 1990 last season, only for Juventus to pip them and seal a seventh consecutive Scudetto.

Maurizio Sarri did a wonderful job with Napoli, but he has now moved on to pastures new, heading to Chelsea and taking playmaker Jorginho with him.

Replacing Sarri in the role is Ancelotti—one of the best managers of his generation and a man who knows all about Liverpool, having been in charge of AC Milan in Istanbul.

Barring Jorginho, they have kept hold of key men, with Kalidou Koulibaly one of the most imposing centre-backs in Europe at the moment.

Marek Hamsik is a legend in Naples who continues to thrive in his box-to-box role, while speedy, tricky diminutive pair Lorenzo Insigne and Dries Mertens provide great quality in the final third.

Jose Callejon is also a very effective member of the attacking unit, with the Spaniard dovetailing beautifully with Insigne and Mertens.

Napoli’s most notable incomings are forward Simone Verdi and midfielder Fabian Ruiz, who have arrived from Bologna and Real Betis respectively.

The question is: can Ancelotti bring the know-how required to get Napoli over the finish line in the league this season?

The boss has already suggested that returned pair Firmino and Alexander-Arnold have enough time to get match-fit before the start of the Premier League season.

They’ll both be involved against Napoli at some point, as they look to get vital minutes on the board.

On Alisson, the boss made it clear he’ll be first-choice and straight into the team:

“It’s pretty likely [he’ll make his debut]. We should not waste time.

“Then it’ll be nearly a week, or six days in training, since he [started] and yes, he will play.

“I’m very pleased [to be able to work with him], but first of all it’s very important he can start now because the season starts in one-and-a-half weeks. Each player in the world needs training and time to adapt to his mates.

“We have two games to do that before we start, so it’s really good.

“He obviously has a real presence, he’s smart, he’s very nice and it’s good to have him around.

“It’s only positive, even the performances in training—which is not too important in the beginning—are already exceptional, so all good.”

Liverpool vs. Napoli is live on LFCTV and LFCTV GO, with coverage getting underway at 5pm (BST). Kickoff is at 6pm.

Chris Williams is hosting This is Anfield’s live blog, bringing you lots of interesting pre-match content before talking you through the action at the Aviva Stadium.