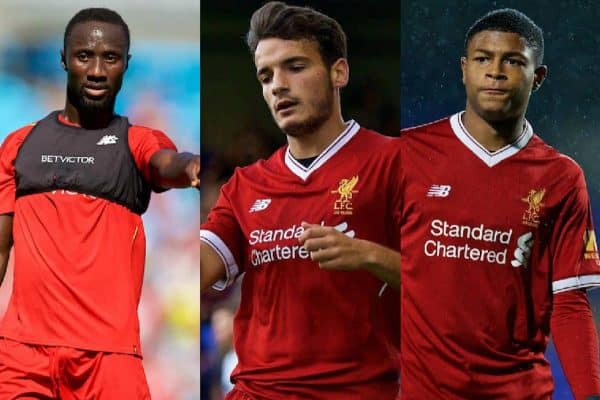 We round up the latest Liverpool news and transfer rumours on Wednesday, as the Reds continue their pre-season training camp in the south of France.

Keita Back in Training

Liverpool fans have been robbed of watching Naby Keita in the last two pre-season matches, which has proved frustrating.

The Guinean missed the wins over Man City and Man United with a neck problem picked up during the long flight to America.

There were slight concerns doing the rounds that Keita’s injury was something more serious heading into the new season, but those predictions are seemingly wide of the mark.

He is now back in training in France, albeit with a “specially tailored” programme according to the Liverpool Echo, and is expected to feature in Saturday’s meeting with Napoli in Dublin.

Pedro Chirivella looked certain to leave Liverpool last weekend, after the club allowed him to hold talks with Rosenborg.

The 21-year-old Spaniard has made the surprise decision to turn down the Norwegian outfit and stay with the Reds for the time being, however, according to the Liverpool Echo‘s James Pearce.

Liverpool would have earned an initial £2.4 million had the move gone through, with that fee potentially rising to £3.5 million.

Chirivella still appears resigned to his exit at Anfield and is thought to be looking to either stay in England or return to his homeland.

Rhian Brewster is a footballer of great potential, with the general consensus that he will represent Liverpool’s first team regularly one day.

The 18-year-old is currently injured, and is expected to be out until December, but he has been speaking about his chances moving forward.

In an interview with JOE.co.uk, Brewster says he has no issue with waiting for his opportunity, considering the quality Liverpool possess in the final third:

“I know I’m not going to be the No. 1 striker, I’m not stupid. We’ve got Bobby, who is world class and is so intelligent in the way he leads the attack.

“I am constantly learning from him, looking at why he’s one of the first names on the teamsheet.

“I can play anywhere in the front three and we’ve got Mo and Sadio in the other two spots, which is pure fire. All three are at the very top of the game, among the best players in the world.

“I’m still young and I know I’m not going be in the starting 11 week in, week out, it’s unreasonable.

“I just want the minutes to show I can be a really good option for the manager and to help my growth as a Liverpool player.

“If there’s an injury, a suspension, fatigue or any other issue, I want the club to feel like they can trust me to step in and I want to provide whatever support I can to the team.”

Liverpool FC Women will begin the new season with a high-profile clash with Man United Women, with the two teams meeting at Prenton Park on August 19 in the Continental Tyres Cup.

Neil Redfearn and his side will then begin their Women’s Super League campaign away to Arsenal on September 9, with their first home game against Reading FC Women on September 30.

Read the fixtures in full here.

Earlier in the summer, Barry Lewtas was appointed as Steven Gerrard’s successor with the Liverpool U18s, having previously been in charge of the U16s.

He has spoken to LiverpoolFC.com about his pride at taking the role and says he will strive to improve the Reds youngsters:

“I’m extremely excited and it’s a huge honour. I’ve been at the academy a few years now and worked across different age groups.

“The staff and the structure at the academy is tight knit so working across all the age groups, it’s obviously beneficial knowing the boys who are coming through.

“It’s exciting for me because there will be a number of boys in the squad this year who I worked with last year when I was in charge of the U16 group.

“Some of the lads I’ve known since they were 15 and it’s extremely exciting for me to see them on the next part of their journey.

“I’ve got a good understanding of where they are in their development, of what they are good at, but obviously more importantly where they need to improve.”

Lewtas’ first match in charge will come away to Sunderland on August 11, before Man United visit the academy seven days later.