An exciting lineup including debuts for certain new signings could lead Liverpool into the 2018/19 Premier League opener against West Ham.

The Reds return to business looking to kick-off the campaign with victory against a much-changed West Ham outfit at Anfield.

There’s a real buzz surrounding the Reds ahead of the big kick-off, and Jurgen Klopp’s side will be hungry to signal intentions of ensuring it’s a trophy-winning season with a fast start.

The squad was bolstered impressively over the summer and the new signings combined with the emergence of new upcoming talents ensures Klopp has a squad to compete on all fronts.

With quality options comes tough decisions and it’s fair to say Klopp has plenty ahead of selecting his first lineup, with Alisson, Fabinho, Naby Keita and Xherdan Shaqiri all hoping to make debuts.

So how could the Reds lineup for the season opener? 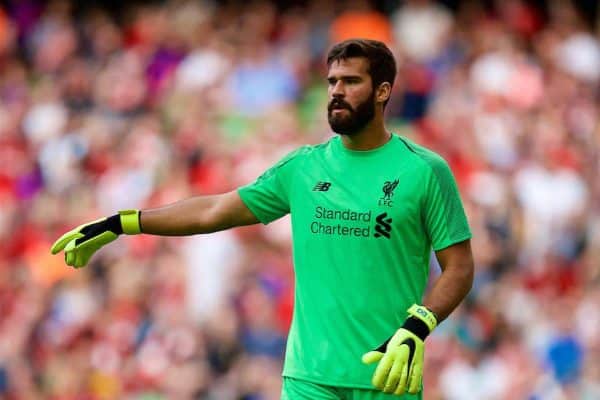 Alisson is certain to make his debut at Anfield, as will Naby Keita.

Fabinho could miss out on a Reds debut – the Brazilian received the all clear on his injury scan but is struggling with illness.

Decisions on Jordan Henderson and Trent Alexander-Arnold’s readiness will be made closer to kick-off time.

Xherdan Shaqiri will hope his impressive pre-season form earns a competitive debut, while the revitalised Daniel Sturridge will feature on the bench.

A surprise inclusion could see Nathaniel Phillips involved or even start if Gomez and Matip miss out. 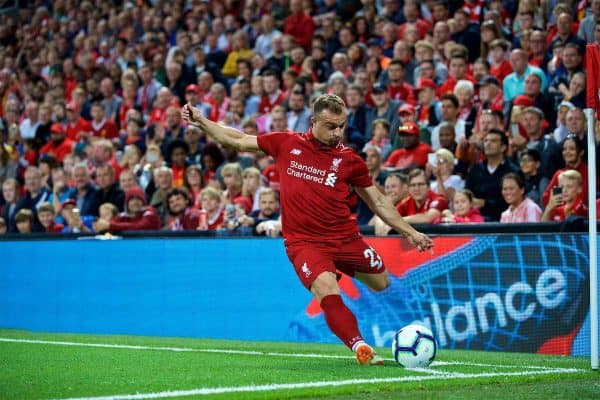 Coming into the first game with injury concerns isn’t ideal but the excellent transfer business conducted ensures plenty of strong selections are available.

Despite the numerous options, Klopp’s first lineup of the campaign picks itself in most areas.

As stated, Alisson will debut behind a back-four including undisputed first-choice picks, van Dijk and Robertson.

Keita will immediately enjoy similar status in midfield to make his bow from the off, while the three amigos – Mane, Salah and Firmino – will again link-up.

Four shirts are therefore up for grabs – right-back, centre-back and two midfield places – leaving Klopp with some interesting calls.

At right-back, Clyne will be more physically prepared after a full pre-season but if Alexander-Arnold proves he is ready then the youngster, who has made the role his own, will start.

In contrast, Klopp’s decision could be made for him at centre-back if Gomez and Matip fail to shake off respective issues, with last-man-standing Phillips then sure to be handed his debut next to van Dijk.

Tough calls present again in midfield with countless options available, and it’s crucial that the right balance is struck.

Wijnaldum could – and perhaps should – start in holding-midfield if Fabinho misses out and given Henderson’s lack of pre-season, while Shaqiri should join the Dutchman and Keita to complete an attack-minded XI. 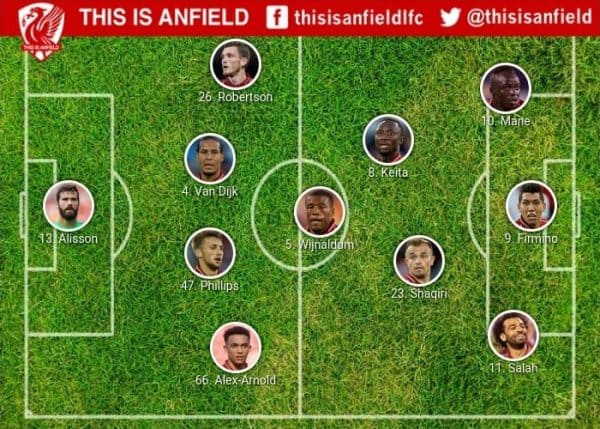 Klopp may decide against such an aggressive lineup and go for a more solid side to feel the way into the season given tricky fitness situations.

Starting the fully-fit Clyne seems a sensible move, while Klopp seems more hopeful that Gomez will recover in time to play, avoiding having to throw Phillips in at the deep end.

A more functional central unit could feature, with Henderson – who Klopp says is “full of power” – starting to allow Wijnaldum to operate in tandem with Keita behind the front three.

Such a selection would leave Klopp with plenty of game-changing options to utilise. 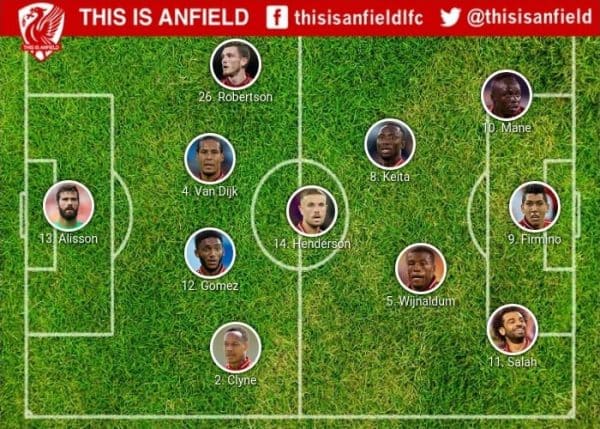 Despite going into the opener depleted, the Reds still have some excellent lineups available and most importantly, selections that are more than strong enough to get off to a winning start.