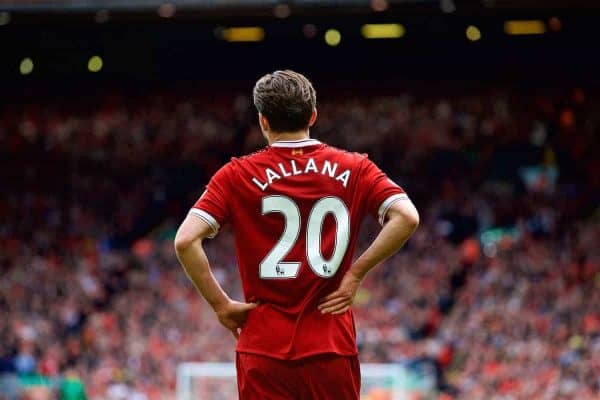 Adam Lallana returns, but can he be relied on? – Expert injury analysis

Adam Lallana is back in full training after his 11th injury since joining Liverpool, but it will be difficult to return to a regular role, as explained by our injury expert here.

EXCLUSIVE FOR THIS IS ANFIELD
Dr. Rajpal Brar, DPT of Injury Insight

The 30-year-old midfielder has been cleared to play against Huddersfield after missing Liverpool’s first seven league games with a groin injury, but the pressing question remains – can he actually stay on the pitch and become a reliable option for some much-needed midfield depth?

Suffice to say, it’s going to be an uphill battle due to his extensive injury history:

What really alarms me is the series of repeat soft tissue injuries that he’s suffered from the 2016 season onwards – missing a combined total of eight months and nearly 50 games with recurring hamstring and groin injuries.

To understand why hamstring and groin injuries are so problematic for footballers, let’s take a closer look at each:

The hamstrings are constantly stressed in a football match, for two specific reasons:

The hamstrings decelerate (“brake”) the front (swing) leg on every forward stride to create a stable base of support for the next stride:

This happens on every single stride.

Additionally, whenever Lallana wants to decelerate and slow down, the hamstrings forcefully activate to slow down the legs and decrease the pace. The faster he’s running the more stress there is on the hamstrings to accomplish that task.

To complete these deceleration tasks, the hamstrings contract while lengthening, otherwise known as an “eccentric contraction.” This is in contrast to a “concentric contraction” which is when a muscle contracts while shortening. I created the following visual, using the example of a biceps curl, to illustrate the difference:

An eccentric contraction is significantly more stressful on the muscle. In fact, the soreness you feel after a workout is more often than not due to the eccentric portion of the weight-lifting.

Further, the hamstring decelerates (“brake”) the lower leg during the follow-through phase of the kicking motion which adds even more stress:

The second reason why football puts significant stress on the hamstrings is:

Combined forceful hip flexion and knee extension during any movement puts additional stress on the hamstring:

Sports that involve this combined movement have a higher prevalence of hamstring injuries (see here, here, and here for more info). Obviously, football is one of those.

Lallana will be constantly asked to do both of these things. Additionally, he has some major risk factors for hamstring re-injury:

Further, most of these re-injuries happen within the first two months after returning, with increased risk thereafter.

Some studies have shown that the risk for re-injuring a hamstring is three times higher than a non-injured player for up to a year after the initial strain.

Lallana has an extensive history of hamstring problems and he’s definitely still inside that one year window of increased injury risk (his last official hamstring strain was March 2018).

Generally, the overall risk for hamstring injury increases by nearly 30% every year after the start of a professional football career.

3 – Running quantity has been linked to increased hamstring injuries. In Jurgen Klopp’s system, that emphasises closing down space quickly via a constant press, there’s certainly a lot of running required.

Additionally, this can lead to fatigue which (can you guess what’s coming?) has also been linked to an increased risk for hamstring injury – potentially due to decreased hamstring torque and/or strength deficits as fatigue sets in.

For all these reasons, we still have to be weary of Lallana re-injuring a hamstring. However, the more immediate concern is the injury that has kept him out thus far this season…

“Groin” is a nebulous term, but for footballers it often refers to the strain of the adductors (a group of five muscles) or illiopsoas (a group of two) muscles. Both of which are near the groin region:

Like the hamstrings, these muscles are also constantly put under stress in a football match. They have to activate during running, any kicking motion, acceleration/deceleration, twisting, and any lateral movement. For these reasons, groin strains are among the most common injuries in adult male footballers, accounting for nearly 11 to 16% of all football injuries.

Additionally, the higher the competition level (and therefore match intensity) the more stress on the muscles. It’s no coincidence a higher rate of groin strains occur at the highest levels of football competition and can lead to a vicious cycle of constantly recurring groin strains.

Furthermore, like the hamstrings, Lallana also has several risk factor for re-injuring the groin:

1 – Again, the highest risk of groin re-injury is a previous groin injury. The research shows that Lallana is at seven times greater risk of re-injuring the groin compared to a non-injured player.

2 – Age is also again a risk factor. With groin injuries, age-related changes result in the tissue being less elastic and less able to absorb force which results in a higher injury risk.

In addition to specific hamstring and groin risk re-injury risk factors, there’s one last thing we have to consider in determining Lallana’s viability going forward:

The human body is a series of interdependent parts, with each part relying on the others to distribute stress – like links in a chain.

When one part of that chain is injured, the rest have to compensate and take on additional work. It’s like being in a group project when no one else pulls their weight.

An extensive injury history, like Lallana’s, can change movemnts mechanics and lead to compensations throughout that chain. In turn, certain muscles can take on too much stress & become overloaded. To that point, the research shows that both hamstring and groin injury risk is increased when other muscles in the lower leg are injured. It’s yet another risk factor for the former Southampton player.

IV. All in All

I know this piece may seem like a Debbie Downer. However, I want to make clear that these risks are inherent for any ageing footballer who has an extensive soft tissue injury history and will be playing in a high work rate, press system. But they are not certainties.

If Lallana is re-introduced gradually – which I fully expect to be the case, Klopp ain’t no fool – and works extremely diligently on his fitness and ongoing prevention, there’s the potential for him to become a valuable contributor in the depleted midfield.

Does that mean he’ll be playing a 90-minute role? Highly doubtful. But there’s a chance he can return to being a good rotation player for the team.

Irrespective of everything else, I’ve seen first-hand how repetitive, nagging injuries can negatively affect a player’s mental state so on that basis alone, I hope he’s through the worst of them.