Jurgen Klopp has named a mixed side for Liverpool’s return to domestic action as they take on Huddersfield Town in a 5.30pm kickoff (BST) this evening.

The Reds went into the international break having failed to win in four games, but were buoyed by a battling 0-0 draw with Man City to keep them level at the top of the Premier League.

This clearly informs Klopp’s starting lineup at the John Smith’s Stadium, though Liverpool are certainly still in excellent shape as they look to extend their unbeaten league run to nine games.

Alisson starts in goal, after keeping a clean sheet for Brazil against Argentina on Tuesday, hoping to maintain his brilliant record so far between the sticks.

Ahead of the 26-year-old in defence are Joe Gomez, Dejan Lovren, Virgil van Dijk and Andy Robertson.

In midfield, Jordan Henderson is poised to marshal the ranks in the deep-lying role, flanked by James Milner and the returning Adam Lallana.

And with Sadio Mane suffering a thumb injury and Roberto Firmino rested, Mohamed Salah, Xherdan Shaqiri and Daniel Sturridge line up in attack.

Among Klopp’s substitutes are Firmino, Gini Wijnaldum and Divock Origi, ensuring the manager a variety of options as he looks to get another one over his best man, David Wagner.

Origi is in the matchday squad for the first time since the 1-0 victory at home to Crystal Palace in August of last year. 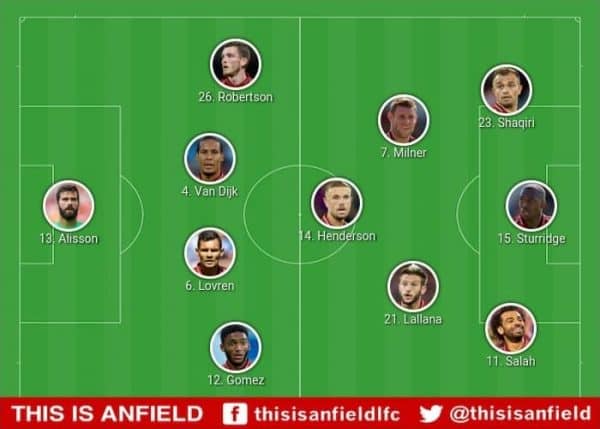