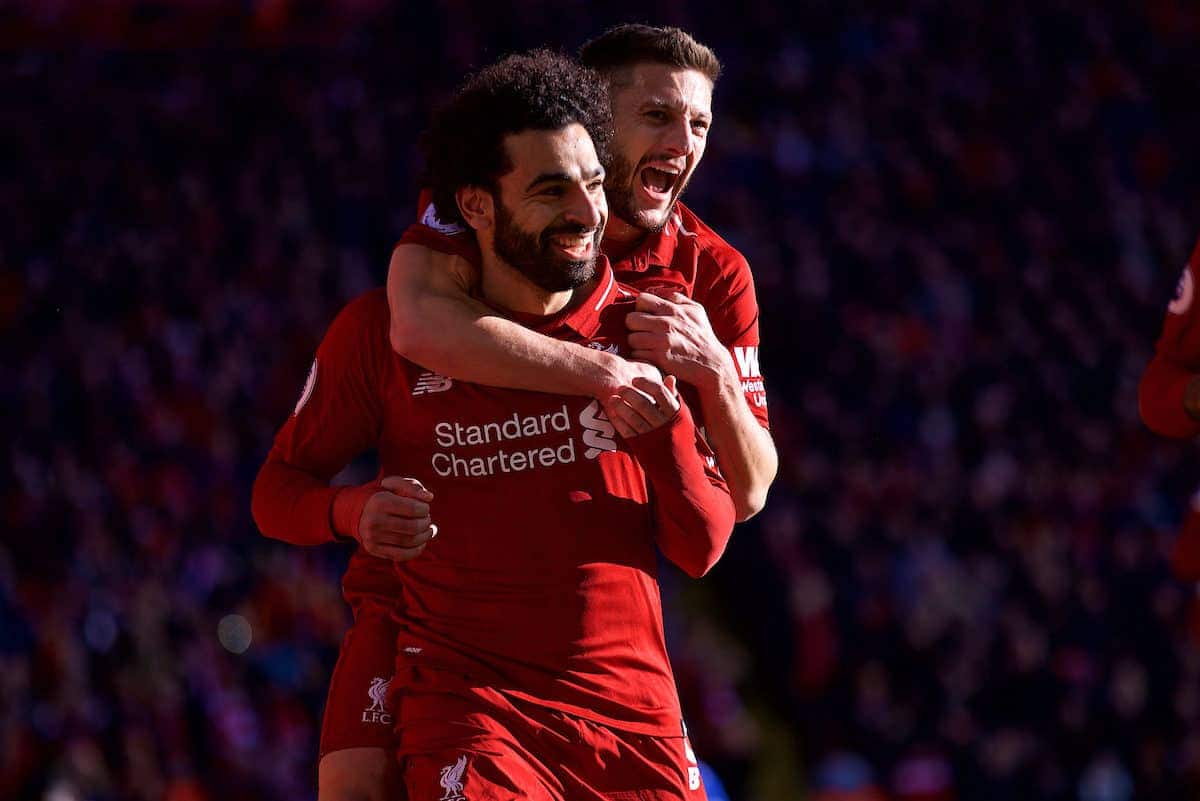 A number of Liverpool players shone in their 4-1 win over Cardiff City, but who did the watching media feel impressed the most at Anfield?

The Reds cruised to the top of the Premier League table on Saturday, seeing off a Cardiff side that mustered just one shot on target all afternoon.

After signs of Jurgen Klopp‘s side starting to find top gear against Red Star Belgrade in midweek, they again caught the eye for large periods.

Granted, there was a lull in the second-half, during which time Callum Paterson pulled a goal back, but Sadio Mane‘s brace and further goals from Mohamed Salah and Xherdan Shaqiri saw Liverpool run out comfortable winners.

The victory means the Reds are still undefeated with 10 league matches played this season, with just four points dropped in total.

Below, we compare our player ratings with those of the Liverpool Echo, the Mirror, Sky Sports, ESPN, The Anfield Wrap, FotMob and the TIA readers. 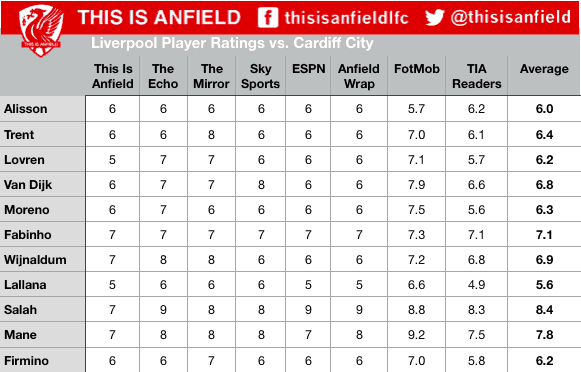 There was a mix of high and low in the average ratings, summing up what was a Liverpool performance with both quality and patchiness thrown in.

It was Salah (8.4) who unsurprisingly topped the pile, as the Egyptian continues to return to the form that saw him become of the world’s top attacking players last season.

Mane (8.0) was not far behind, however, finding the net twice and cutting a far more dangerous figure than we have seen of late.

The Anfield Wrap‘s Josh Sexton reminded us that the 26-year-old is “joint second top scorer in the league after a supposed slow start”, putting his apparently low-key displays into perspective.

Salah and Mane’s fellow front-three destroyer Roberto Firmino (6.5) had a more below-par afternoon, though, with This is Anfield‘s Karl Matchett admitting that “his first touch was off on too many occasions”.

The Reds’ lowest-rated player on the day was Adam Lallana (6.1), with the Englishman struggling to fit in after his return from injury.

ESPN‘s Glenn Price cited “little end product” for his 5/10 assessment of the midfielder, while Doyle similarly felt he “struggled to find a decisive pass”.

Fabinho (7.2) had another noticeable impact in the No.6 role, with Matchett hailing him for looking “sharper” after a slow start, and in-form Gini Wijnaldum (7.3) was lauded for his “control in the middle” by Maddock.

Someone who unsurprisingly got a mention by some, even though he came off the substitutes’ bench, was an increasingly influential Shaqiri, who bagged his first-ever Liverpool goal in style.

He averaged 7.9 with This is Anfield‘s readers, Sexton said he “made a world of difference” after being introduced and Price believes he is “a better option than Lallana”.

Next up for Liverpool is a mouthwatering trip to Arsenal next Saturday – a clash between two aesthetically-pleasing sides brimming with confidence.