Liverpool got back to basics to an extent and kept a clean sheet in the 0-0 draw with Man City and Andy Robertson feels the Reds are right in the title race.

The back line has remained largely unchanged this season for Jurgen Klopp, but the boss made one alteration for the visit of City to Anfield.

Joe Gomez, excellent in the centre this term, shifted to right-back as Dejan Lovren came in to partner Virgil van Dijk in the middle.

Robertson, of course, remained at left-back and put in an accomplished display, battling to shut down City’s attacks down the flank.

The Reds started very much on the front foot, looking the more adventurous side, but the match ended as a stalemate as the two teams showed increasing respect to each other.

Robertson told Sky Sports it shows the Reds are set to be in a title fight, but it won’t just be these two sides involved. 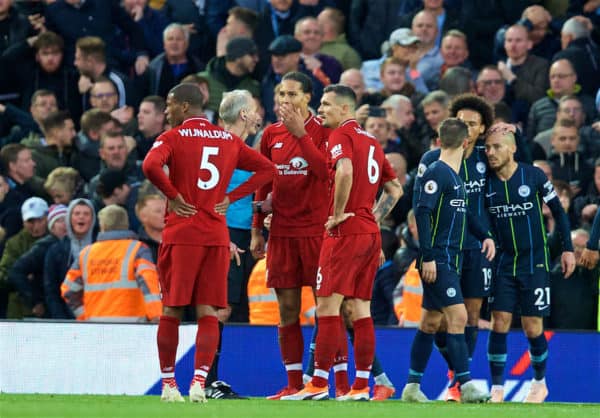 “We feel we can compete with any team but people seem to be just dismissing other teams and making it a two-horse race, which is not the case.

“We played Chelsea last week, who were excellent. They have been on a great run. You see teams like Arsenal, with a new manager, putting great results together.

“So there is a long way to go and there will be a lot of teams competing but we hope we are one of them.

“We started well. We were all disappointed with Wednesday as a 90 minutes as a whole, so we wanted to get off to a fast start.

“They struggled to get a foothold in the first half. They probably controlled it a bit more in the second half and had a bit more composure when we were rushing it.

The Scotland captain will head off now, like many of his team-mates, for international duty—and says it was vital for Liverpool to end this run of matches on a positive note.

“There was nothing really in the game – it was two really good teams going at it. Unfortunately, the deadlock wasn’t broken.

“But for us it’s another important point, especially going into the international break with a long break until the next game.”

On the opposite side of the back line, Gomez continued to showcase why he has been hailed as one of the league’s top defenders this term. Reprising the full-back role he played last season, he was one of the afternoon’s most assured performers and said the clean sheet was the primary objective for his defensive partners.

“As a back four, that’s what we go into every game going for. It was nice to keep hold of it.

“As a unit, it’s all of us. We defend so well as a team; it starts from the front with the work-rate they put in. We want to do it collectively.”

Gomez has established himself as a key starter for the Reds at the beginning of this campaign and his showing in his secondary position highlights what a big role he can play this term.