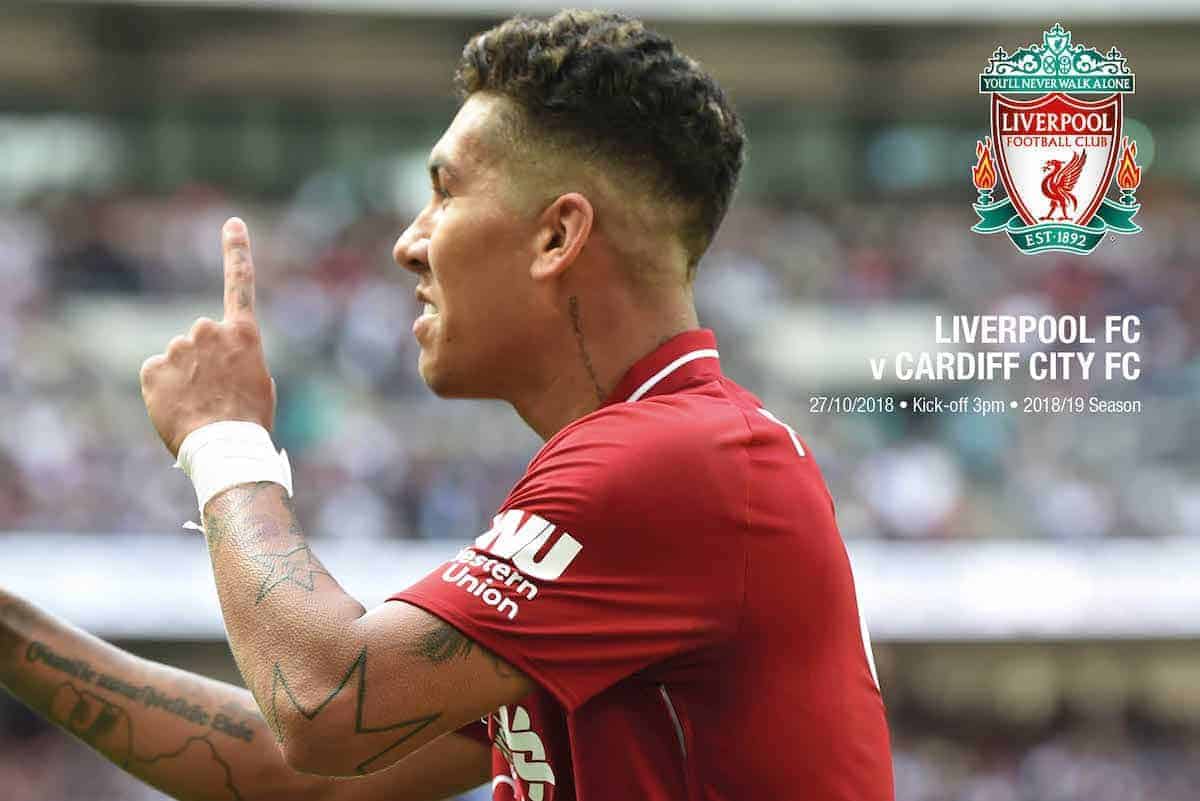 Liverpool are fully expected to add three more points to their Premier League tally on Saturday afternoon, with a win putting them back to the top of the Premier League.

The Reds sit second in the table behind champions Man City on goal difference, despite not yet getting out of second or third gear.

Wednesday’s 4-0 drubbing of Red Star Belgrade in the Champions League showed signs of the attack sparking again, however, with Mohamed Salah, Sadio Mane and Roberto Firmino all finding the net.

You feel this could be the start of some scintillating displays as fitness levels improve and key individuals find more rhythm to their game.

Hoping to put an immediate stop to that are Neil Warnock’s Cardiff City – a limited outfit who will surprise many if they somehow avoid relegation back to the Championship this season.

Warnock teams are always well-drilled and keen to upset the apple cart, though, and the veteran would love nothing more than to frustrate the hosts and snatch something.

The Bluebirds’ 4-2 win over Fulham last weekend was their first in the league this season, so they will be going into the game with a certain amount of confidence.

That being said, Liverpool are on another level in terms of quality and only a superb defensive outing will give Cardiff a sniff of a positive result.

As long as the Reds don’t go into the match overly confident, they should pick up another victory, going top of the table until Monday night at least, when Man City take on Tottenham at Wembley.

Naby Keita and Jordan Henderson are both still out with hamstring injuries, although they could return for next Saturday’s trip to Arsenal.

They are Klopp’s only fitness concerns, as things stand.

It will be interesting to see if the German goes with an unchanged starting lineup from the Red Star game.

There is the option of bringing Dejan Lovren back in at centre-back, but Joe Gomez and Virgil van Dijk look comfortably the strongest pairing at the moment.

Trent Alexander-Arnold‘s attacking quality is also required in a game where Liverpool will have lots of the ball, rather than using Gomez at right-back.

Fabinho was superb in his first Champions League start for the Reds, and with Henderson and Keita both missing, it would be a big surprise if he didn’t feature prominently again.

James Milner could come back into the midfield, but Gini Wijnaldum is in inspired form and Klopp may choose to use Firmino in the No.10 role again.

Someone else who doesn’t merit losing his place is Xherdan Shaqiri, who already looks the part for his new club. He is expected to be a part of the attack, along with Salah and Mane.

Gary Madine could return after struggling with illness but Harry Arter and Josh Murphy are doubts and will be assessed.

Last 5 at home to Cardiff

Liverpool still haven’t conceded a home Premier League goal since February, when Michail Antonio bagged a consolation in the 4-1 win over West Ham.

The Reds have played nine home games since then and they will fancy their chances of making it into double figures this weekend.

Speaking at Melwood on Friday, Klopp returned the favour after Warnock’s kind words about him, lauding the Cardiff boss’ qualities:

“He looks like a character, a very emotional and lively person.
“I saw the final period of the Championship last year and it was impressive how they did it. They deserved it.
“He looks like a very demanding manager and always has my respect.”

Liverpool experience just their second Saturday 3pm (BST) kick-off of the season, meaning the match is not screened on UK television.

This is Anfield’s live blog is the perfect place to keep an eye on the game instead, with Henry Jackson bringing you minute-by-minute updates from 2.15pm.