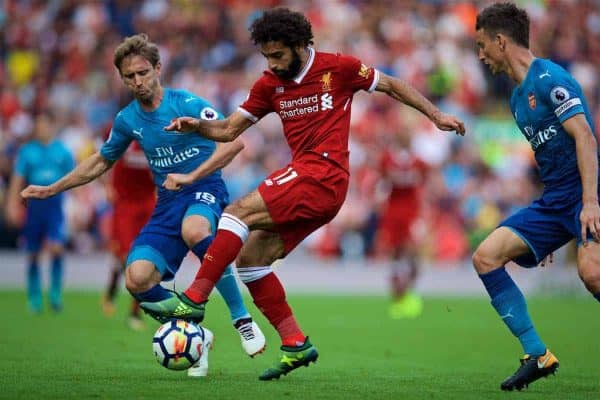 Liverpool’s clash with Arsenal could be hugely important in the title race, and interestingly, both sides have a great record with Saturday’s referee in charge.

The Reds travel to the Emirates this weekend looking to keep up the pace with Man City after their 1-0 victory at Tottenham.

A strong 4-1 win over Cardiff City last time out had seen Jurgen Klopp‘s side leapfrog their title rivals for a brief period, but City are now back in pole position on goal difference.

While a trip to Arsenal—who are unbeaten in their last 12 under Unai Emery including 11 wins—cannot be considered straightforward, the appointment of Andre Marriner as referee could be a good omen.

The 47-year-old has been in charge of 43 games including Liverpool, the joint-most of any side along with City, and the Reds have only lost nine of those.

They have won 19 of those, but while only five sides boast a better record with Marriner blowing the whistle, one of those is Arsenal (22).

Liverpool have a 44.2 percent win rate in their games under the West Midlands native’s officialdom, while the Gunners preside over a 61.1 percent ratio.

No side to have been refereed by Marriner more than 30 times have lost fewer than the Reds (nine), however, at least boosting hopes of extending their unbeaten run in the Premier League.

Unsurprisingly, only City (75) have been shown more yellow cards in those games than Liverpool (69), but Arsenal have a mixed disciplinary record themselves.

Marriner has cautioned the Gunners just 47 times in 36 games, but three of their players have been shown straight red cards—including a case of mistaken identity that saw him send off Kieran Gibbs and not Alex Oxlade-Chamberlain in 2014.

That foul from the future Liverpool midfielder saw Marriner award one of just three penalties against Arsenal in those 36 games—but the Reds have a decidedly more controversial record.

In 43 games, he has awarded Saturday’s visitors seven spot-kicks (more than any other side) and given four against them.

He awarded one apiece in his last time in charge of the weekend’s fixture, coming in a dramatic 1-1 draw at the Emirates back in 2011.

In a game marred by injuries to Fabio Aurelio, Andy Carroll and Jamie Carragher, the two sides played over 100 minutes of football, with both goals coming deep into second-half stoppage time.

That day brought one of four draws between Liverpool and Arsenal in the last 10 games at the Emirates, with the Reds only winning two of those.

However, they are unbeaten in their last three outings in N7 and, impressively, haven’t lost to the Gunners in their last six meetings.

Klopp is yet to lose to Arsenal, and the hope is that, Marriner or no Marriner, he can continue this excellent record despite Arsene Wenger’s exit in the summer.