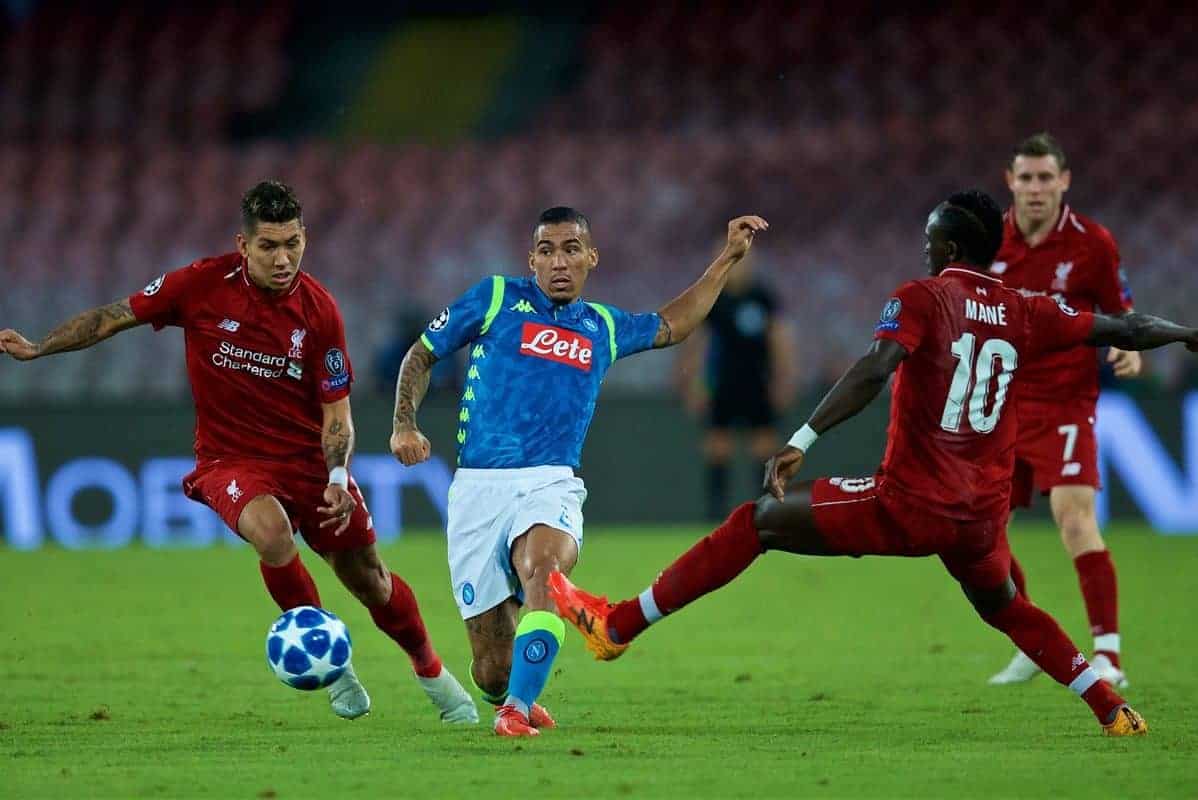 Liverpool lost 1-0 at the death away to Napoli on Wednesday in the Champions League, and it was a night where the Reds’ performance was widely criticised.

The Reds faced Carlo Ancelotti’s side at Stadio San Paolo, looking to follow up their opening Champions League win over Paris Saint-Germain.

It was a dour contest in Naples, however, with chances few and far between for Liverpool and the hosts the better team throughout.

Naby Keita left the pitch on a stretcher early on, with many concerned…

Horrible to see Keita stretchered off. Wish him a speedy recovery – will be sorely missed if out for a sustained period.

Doesn't look good for Keita that. Explains why he was so poor.

Thought Keita had a poor opening 15 but that’s still a worry. #LFC

When a player goes down without a challenge near him I get worried. Hope Naby is alright.

Joe Gomez has been our best player so far. So good playing out from the back. Beast.

“Gomez having an excellent game so far.”

– Caradoc on the forums.

Gomez is a machine

It was a fairly below-par first-half performance…

HT: Napoli 0 #LFC 0: Klopp's side just haven't got going. Fortunate to be level. Far too many careless errors. Centre-backs aside, very poor.

“I know we have to be cautious when we are away in Europe, but that was pathetic and TAA that was the worst I’ve seen you play in a very long time.”

“Bag of porridge that half. Shocking pitch hasn’t helped. They’re playing rough house. Couple of yellows missed by the ref. TAA having a poor one.”

– RJK on the forums.

Scrappy first half. No real good link play between midfield and attack just yet Keita had looked like he was willing to do that before coming off

The display was criticised at the final whistle…

Klopp got his tactics wrong tonight. Can understand being slightly reserved for an away Champions League game, but to not utilise Shaqiri and Sturridge when the front three was lacking any fluidity was a huge head scratcher.

“Napoli shut us down very well. That is one of the worst performances from a Liverpool team I have seen for a couple of years. No imagination whatsoever. Poor.”

Got what we deserved there. Poor performance.

Exactly what we deserved. Would’ve been lucky to escape with a draw, Napoli much the better side. Poor performance all round.

“I haven’t seen us playing so bad from many games… No words! It was a match to forget at the minute it finished. COMPLETE disaster!”

Can’t argue with that, Napoli far better than us all over the pitch tonight. The group is suddenly wide open and we’re still waiting for our front three to click.

Difficult, gritty game, and ultimately not good enough. First time saying that this season, but one lapse and you’re caught. A show of calibre now needed to learn from that, because it’s poor. #LFCdigest

Salah worked hard off the ball but on the ball his touch and technique constantly let himself down.

Does Salah even press from the front anymore, just like never going on his right foot. He has all the ability but really needs a break to refresh his mind imo

We dropped Salah for stoke away last season and he came on and scored 2.