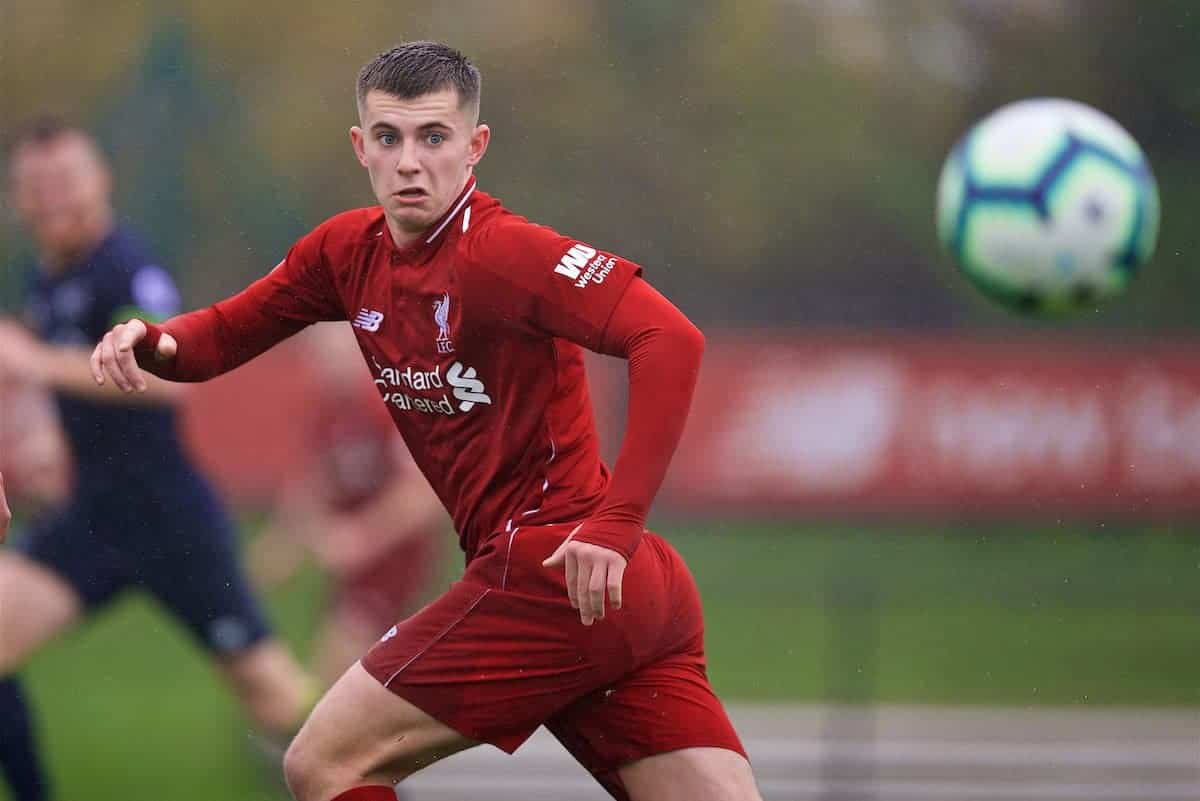 Liverpool Under-23s won 1-0 away to Everton Under-23s on Sunday, with Ben Woodburn playing the 90 minutes and shining at Goodison Park.

Neil Critchley‘s side faced their local rivals at Goodison Park, looking to get the better of their top-of-the-table opponents.

The most notable inclusion in the starting lineup was Woodburn, who returned from his stuttering loan spell with Sheffield United to take part.

There were a total of seven changes made to the inexperienced side that lost 7-0 to Villarreal in the Premier League International Cup on Wednesday.

Camacho produced a searing run down the middle of the pitch before seeing his shot deflect wide, as Liverpool looked the stronger side early on.

Phillips and Woodburn hit the crossbar from a corner within seconds of each other, with the latter’s miss going down as a sitter.

The Reds were ahead in the 11th minute, however, after Lewis’ shot took a wicked deflection off Camacho and found the net.

Nathan Broadhead almost equalised immediately but the ever-impressive 16-year-old Ki-Jana Hoever just did enough to put him off in front of goal.

After a frantic period, the game settled into more of a rhythm, with Camacho’s goal-bound effort headed away by Morgan Feeney.

Liverpool went in ahead at the break having impressed in the opening 45 minutes in a 3-5-2 formation – Woodburn had led the line effectively alongside Camacho.

Keller made a comfortable couple of saves early in the second half, but the Liverpool goalkeeper had little to do of note in the first hour.

The Reds didn’t offer as much threat going forward after the interval, but they looked in control, defending excellently.

Bassala Sambou tested Kelleher after an error by Chirivella – one of the few things the Spanish midfielder did wrong all afternoon – and captain Johnston made a superb block to deny Kieran Dowell.

Camacho fired a stinging 25-yard strike narrowly wide as Critchley’s side looked to put the game to bed, with a priceless victory edging ever nearer.

Shayne Lavery fired straight at Kelleher but the visitors saw the game out in a professional fashion, celebrating joyously at the final whistle.

The win means Liverpool stay eighth in Premier League 2, but it is a result that will bring so much confidence to the young Reds.

Man of the Match: George Johnston