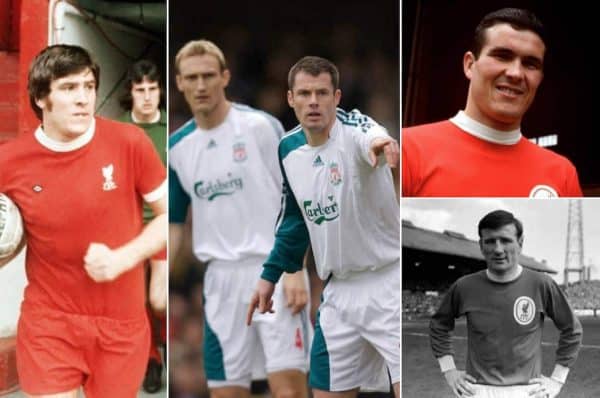 With Liverpool returning to the days of true defensive stability, we run through the best centre-back partnerships in the club’s history.

During their illustrious history, Liverpool have boasted some of the best central defensive pairings around.

For a period of around 25 years the club’s defensive core were among the best in the world, and some of the duos in recent times haven’t been too shabby, either.

What follows is a look at the players who complemented each other well and helped define Liverpool’s style of play during their time in the side.

In nearly all of these cases these centre-backs provided a platform for success—will Joe Gomez and Virgil van Dijk be able to follow their lead?

Full-Backs and a Centre-Half – The Early Years

Early formations were variations of 2-3-5, using two full-backs who were effectively the central defenders; three halves, the middle of which—the centre-half—was often defensive; and five attackers.

This meant central defensive partnerships were rare but, for the record, Scotsmen Jack Robertson and Billy Dunlop were the full-back partnership when Liverpool won their first league title in 1901, with Alf West joining Dunlop when they won their second in 1906.

However, reports around this time regularly mention centre-half Alex Raisbeck as the club’s best defender.

Raisbeck was one of Liverpool’s first star players, and the centre-half was often spoken about as a defensive-minded player, and would probably have been similar to today’s defensive midfielders.

“Raisbeck was wholeheartedly a destroyer of attacks,” Victor Hall wrote in the Liverpool Echo at the time.

“His judgement was sound, his valour outstanding and, naturally for a half-back, his control and placing of the ball was equally confident.”

These words suggest he was an early example of ball-playing central defender, in his actions if not yet in name.

“During his playing career at Anfield, he had to meet forwards whose names and records were outstanding in the history of the game,” continues Hall.

“Yet not of one of them could it be said that they were the superior or master of Raisbeck’s defensive play.”

Even when the formations evolved beyond the 2-3-5 to the popular ‘WM’ formation or the similar 3-3-4, there were a trio of defenders rather than a centre-back partnership as we know it today.

The club first used a back four under Bill Shankly, who guided the team from the Second Division to the league title in his first four-and-a-half seasons in charge.

While this is debatable, there’s no doubt he introduced Liverpool’s first real centre-back pairing…

Towards the end of 1964, Shankly dropped Smith into the defence alongside Yeats to use their combined strengths in the back line.

Smith, the former midfielder, or No. 10 (then a withdrawn inside forward), was the ball player, joining midfield from the back. Yeats was the out-and-out defender, though Yeats himself has said that his new partner could defend with the best of them.

“Tommy was a good user of the ball and I was good in the air. I was a good tackler and so was Tommy,” he said.

“If I got pulled out of the middle of the defence, I would expect Smithy to be where I should have been; and vice-versa.”

They set the standard for the pairings to come, and Smith would go on to feature in more of them as Shankly’s Liverpool laid the foundations which would eventually see them become one of the best sides in Europe.

Lloyd eventually took over from Yeats alongside Smith, and would continue the work of the Scotsman acting as the designated stopper and spoiler alongside the smaller Smith, whose strengths lay in ground duels and passing.

Lloyd partnered Smith as the club won the double in 1973, securing a league title along with their first European triumph, in the UEFA Cup.

He scored in the first leg of the final against Borussia Monchengladbach, and would go on to further European success later in his career as part of the Nottingham Forest side which won two European Cups.

By the time Liverpool won the FA Cup in 1974, Lloyd had been replaced by Phil Thompson, so missed out on the final where a new partnership emerged.

Smith also partnered Hughes and Thompson, remaining in the side in various positions and scoring in the 1977 European Cup final with Thompson injured, but he didn’t see eye-to-eye with Hughes who replaced him as captain and became the more regular centre-back.

By this time Thompson had also replaced Lloyd, forming a regular partnership with Hughes.

This was a new type of partnership based around taking care of the ball and retaining possession. Both had played in other positions which benefitted them in this regard.

They remained first choice until the arrival of Alan Hansen threatened Hughes’ place, with their highlights as a pair including two league titles, an FA Cup in 1974, and a UEFA Cup in 1976.

Once Hansen did find his way into the side, he went on to become one of the best the club has seen in the position.

His partnership with Thompson led to success in the late 1970s which kickstarted Liverpool’s domination during the 1980s.

There were consecutive league titles in 1979 and 1980, as the two formed a comfortable partnership which defended well but also helped the team keep the ball.

As with Thompson’s earlier link-up with Hughes, it was an early example of defending through keeping possession, which also involved goalkeepers Ray Clemence and Bruce Grobbelaar.

A poor league finish in 1981 was offset by a third European Cup win against Real Madrid at the Parc des Princes, with Hansen and Thompson flanked by Phil Neal and Ray Kennedy.

By this time another player was emerging, versatile and good on the ball, ready to continue this unrivalled centre-back evolution which lasted for over 25 years.

Liverpool’s last great centre-back partnership to win a league title was possibly their best ever.

Both players had to work their way into the side, and displacing decorated club legends was not an easy task, but early signs showed this pair were up to the task.

Lawrenson’s versatility meant he was used at full-back and even in midfield before eventually taking his place alongside the classy Hansen in the middle.

They won three consecutive league titles between 1982 and 1984, also winning the League Cup in each of those seasons.

This is Anfield’s Steven Scragg summed the pair up in this article for These Football Times:

Hansen and his two partners helped the club to two further European Cups, keeping a clean sheet with Thompson in a 1-0 victory against Real Madrid in 1981, and with Lawrenson against Roma in 1984.

The pair won an FA Cup and another league title in 1986, and topped the league again in 1988, but by that time Lawrenson was being edged out by Gary Gillespie, before an Achilles injury ended his career at the age of 30.

Hansen would later be joined by the more-than-capable Gillespie, Glenn Hysen, and Gary Ablett, before the club’s fortunes began to decline, as did the quality of their defensive partnerships.

At the turn of the century Hyypia and Henchoz laid the foundations for future defensive solidity, which would really take hold later, when Rafa Benitez joined the club.

Gerard Houllier brought the pair in at the start of the 1999/2000 season. The side had conceded 49 goals during the previous campaign, but with the new duo at the back they would knock 19 off this tally, conceding just 30.

They were a big part of the treble-winning side the year after, and a second-placed finish in the league in 2001/02 season.

They also had Hansen’s blessing, and the Scotsman confirmed that this pair were the best since his time at the club.

“The biggest improvement Liverpool have made in the last couple of years is the fact that they can now establish a one-goal lead and look safe.

“Before Hyypia and Henchoz arrived you could never say that.”

While Benitez’s arrival spelled the end of this partnership, which had also begun to be less prominent during the end of Houlier’s time at the helm, their performances at the back were important for the club’s development and helped Hyypia go on to partner Carragher under the Spaniard.

Prior to Benitez’s arrival, Carragher had been used as a utility player across the back four, regularly playing at full-back during the Hyypia-Henchoz days, but the new boss began to use him in the centre.

They made 105 appearances between them in Benitez’s first season and helped the club to their Champions League triumph that year.

Hyypia scored in the first leg of the quarter-final against Juventus at Anfield, before the pair kept a clean sheet in Turin where Carragher captained the side with Steven Gerrard suspended.

“Alongside Carragher, Hyypia was also impressing, nicking the ball sweetly from Pavel Nedved.”

The next season they would only concede 25 goals as the club rose to third in the league—a defensive showing which hasn’t been equalled or bettered since.

Agger was one of the best central defenders Liverpool have had on their books during the Premier League era.

A few early problems adapting to the league were overcome convincingly, but further problems would arrive in the form of injuries.

The Dane was a defender who would have fit perfectly into the tactics used by most sides today as they use their defenders to initiate passing moves, and fit the Liverpool tradition in this sense.

The balance provided by the ball-playing, left-footed Agger, worked well with the rugged battling defence of the likes of Carragher and Martin Skrtel.

Combining pace, power and keen positional sense, the pair complement each other well, and both are able to fulfil the role of ball-playing defender.

Van Dijk looked head and shoulders above the club’s other centre-backs when he arrived, but at the start of the season Gomez has been his equal, and on the odd occasion has arguably been better than the Dutchman.

If they both stay fit, they will deserve their place on this list.