Liverpool take on Fulham at Anfield this lunchtime looking for a Premier League win before the international break. Here’s all the team news ahead of kickoff.

The Reds suffered what Jurgen Klopp described as a “massive knock” in midweek as they lost 2-0 to Serbian side Red Star in the Champions League.

Today is all about a response, as the hosts look to keep up with Man City and Chelsea in the title race, preserving their unbeaten record in doing so.

Klopp has made four changes to his side from the Marakana, with very strong lineup taking to the field.

Alisson starts in goal, as ever, and will be eager to restore his reputation after some criticism for his role in Milan Pavkov’s second on Tuesday night.

Ahead of the No. 1 are Trent Alexander-Arnold, Joe Gomez, Virgil van Dijk and Andy Robertson, as Klopp’s best back four are reunited.

In midfield, Fabinho and Gini Wijnaldum take up their positions, with Klopp looking to have opted for a 4-2-3-1 formation.

And up front, Xherdan Shaqiri, Roberto Firmino, Sadio Mane and Mohamed Salah will provide the firepower as Liverpool seek their ninth win in 12 games in the top flight.

Jordan Henderson, Naby Keita and Daniel Sturridge are among those named on the substitutes’ bench, but the hope will be that the Reds will be able to wrap things up without needing major changes during the game. 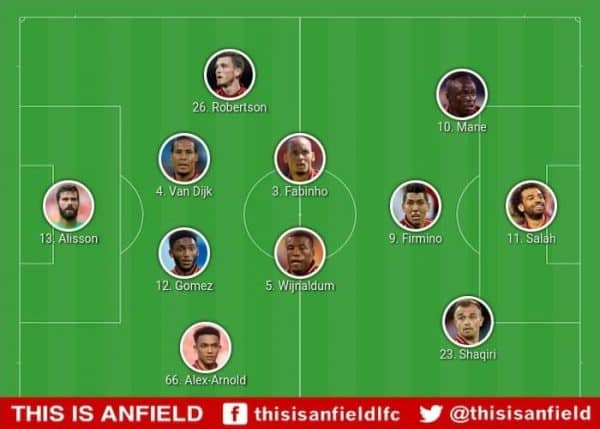