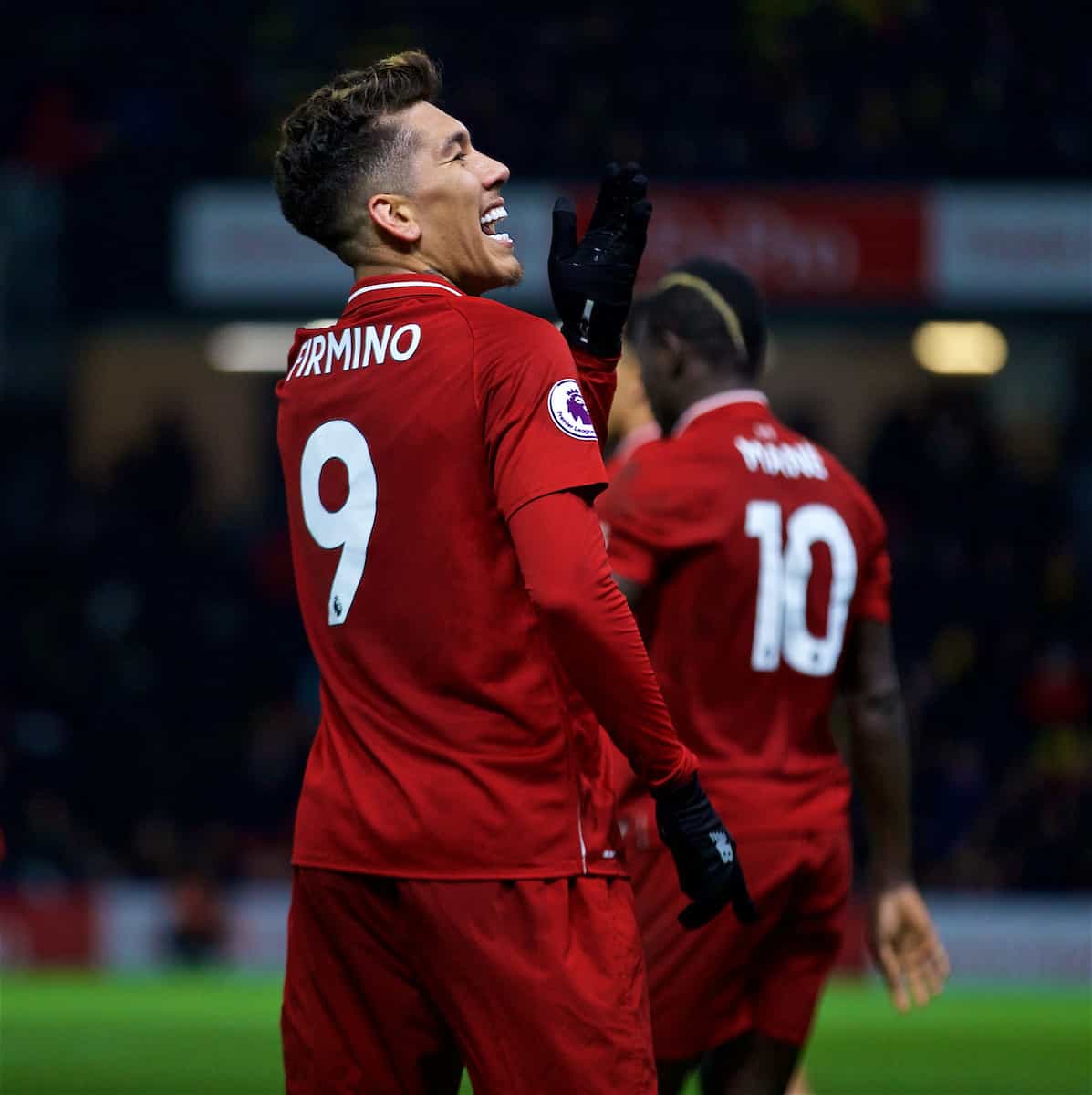 Liverpool battled their way to an impressive 3-0 win at Watford on Saturday, as the Reds stay in touch with Man City at the top of the Premier League.

Liverpool just didn’t used to win games like this – that’s the most encouraging thing to take from a patchy display at Vicarage Road.

As Jurgen Klopp noted post-match: “It was a really mature performance. I know a few people miss one or two situations from last season, but in similar games last season we were not that convincing – it wasn’t clear that we controlled the game.”

Klopp is right; it wasn’t always an easy watch, with the Reds taking until the 39th minute to have a shot, but they controlled the match and remained patient.

As the minutes ticked by their stranglehold on the game increased and they eventually ground down their opponents impressively.

Mohamed Salah‘s opener was clinical, Trent Alexander-Arnold‘s free-kick was stunning and Roberto Firmino‘s header was the icing on the cake.

There is a winning mentality that Klopp has created as his tenure has gone on, and to use a good old cliche, Saturday’s victory was the ‘stuff of champions’.

The performance levels need to improve if Liverpool want to get the better of a Man City team who also ran out 4-0 winners against West Ham, but the Reds are made of stern stuff these days.

A word of praise for the travelling fans, too, who held up a brilliant banner bemoaning the £5 million set to be given to outgoing Premier League chief executive Richard Scudamore.

One player who stood out again on a tough afternoon was the man quietly going about his business in world-class fashion.

Virgil van Dijk was immaculate at the heart of the defence, taming the physical Troy Deeney, making crucial tackles and winning everything in the air.

The difference that he has made since joining from Southampton is even greater than anyone predicted and he is the first name of Klopp’s team-sheet.

To put it bluntly, there is a fair chance points would have been dropped without the giant Dutchman on the pitch on Saturday.

Football supporters will forever be biased, but there is none involved when suggesting Van Dijk is the world’s best centre-back currently.

Klopp again opted to start with a 4-2-3-1 formation, with Mohamed Salah leading the line and Roberto Firmino dropping into a No.10 role.

Although Liverpool ended up getting all three points away to a good Watford team, there are lingering concerns about the manager’s choice of system.

For much of proceedings the Reds lacked a spark and Salah and Firmino both looked less effective than they did together in a front-three last season.

Salah enjoyed one of the all-time great Liverpool seasons by an individual and Firmino enjoyed his record goal tally – is it really worth suddenly switching things up?

Moving forward, there is an argument to say that a return to a 4-3-3 will bring better football and more eye-catching performances from the key attackers, but it is impossible to deny that the 4-2-3-1 isn’t getting results.

We might just have to accept that pragmatism has taken precedence for the time being.

And again, Klopp was correct in his post-match assertion that “I know you always expect perfection, but we had exactly one session to prepare.” 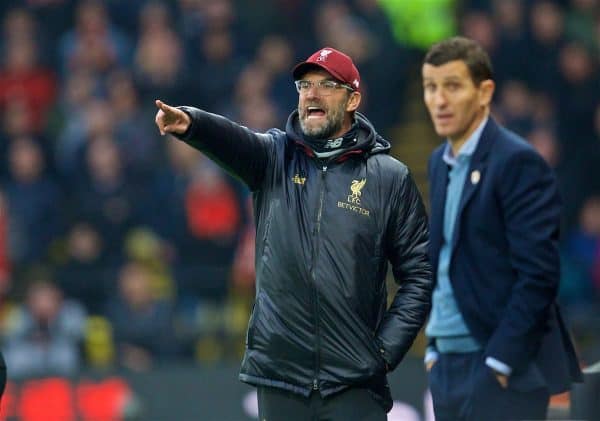 Liverpool have started a gruelling run of fixtures that sees them play 11 times in 40 days, including the usual madness/fun in and around Christmas.

Reds sides in the past have come unstuck in the winter months because of a lack of squad depth, but Klopp has a formidable group of players at his disposal these days.

The starting lineup at Watford didn’t feature the likes of Joe Gomez, Fabinho, Naby Keita and James Milner, yet they still won 3-0 against arguably the seventh-best team in the country.

Not having such good players in the side would have been fatal in years gone by, but there are now strong options all over the pitch.

Liverpool seem to be reaching a stage where several changes can be made and wins still consistently occur – something great sides are experts at.

If that priceless 19th league title does end up coming the Reds’ way next May, squad depth and rotation is likely to have played a key role.

Focus for Klopp and his players now turns to a huge night away to PSG on Wednesday, with Liverpool’s hopes of Champions League progression hanging in the balance.

A victory at Parc des Princes will send them into the knockout stages with a game to spare, but failure to win will likely see them needing to beat Napoli on Matchday 6, possibly by two clear goals.

This win over Watford will have given them plenty of confidence going into the game, as they continue to look rock-solid at the back and capable of beating anyone on their day.

Jordan Henderson‘s daft sending off will probably see him start, considering he will miss next Sunday’s Merseyside derby at home to Everton.

Gomez, Fabinho, Keita and Milner will all be hoping to feature prominently, as that aforementioned rotation comes into play.