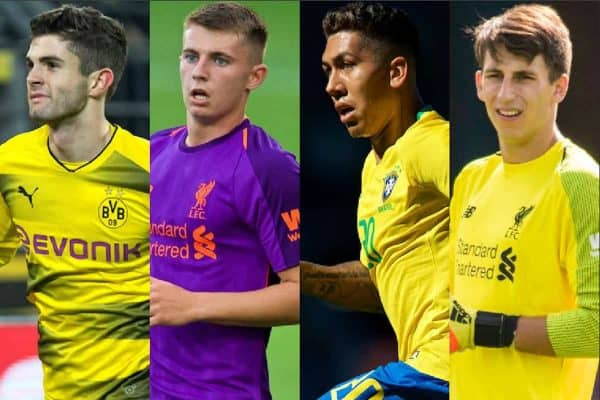 We round up the latest Liverpool news and transfer rumours on Tuesday, as the return to domestic action draws ever nearer.

The Mirror claim that Christian Pulisic is “Premier League-bound,” with Liverpool and Chelsea the favourites to sign him.

The 20-year-old will stay at Borussia Dortmund until the end of the season, however, with sporting director Michael Zorc stating he’s going nowhere in January.

“We have known these rumours for many years. We plan at least until the end of the season with him.”

Pulisic’s contract expires in 2020, so Dortmund will know they can cash in on the £70 million-rated attacker next summer.

One of world football’s most exciting young talents, the American superstar would be a huge signing, but Chelsea will provide stiff competition—as well as others with the financial muscle to lure Pulisic away from BVB.

Ben Woodburn‘s loan spell at Sheffield United is not going to plan, with the Welshman managing just 28 minutes of first-team action since the middle of August.

The 19-year-old already returned to Liverpool briefly last month, playing for the U23s against Derby County, and he may now be recalled permanently in January.

That’s according to Goal‘s Neil Jones, who states that “Liverpool are aware of Woodburn’s frustrations” at Bramall Lane, even though his attitude has not been put into question there.

This is a key moment in Woodburn’s career, with regular football with the Reds unlikely for the time being and a risk of growing stagnant if he goes back to the U23s.

He is still extremely young, however, so the potential termination of his loan deal with United should not be seen as a disaster.

No Interest In Jovic

The Liverpool Echo‘s James Pearce has been quick to dismiss any potential move for highly rated Eintracht Frankfurt striker Luka Jovic, despite reports linking him with the Reds.

He believes this is because “Klopp is excited about the potential of Dominic Solanke and Rhian Brewster,” which is refreshing to hear.

The Liverpool manager has always been one to promote youth from within the club and he clearly believes Brewster and Solanke have as much promise as the much-touted Jovic.

Brewster is still nursing a knee injury that has kept him out for almost the whole of 2018, while Solanke is awaiting his first minutes of the season for the first-team.

Kamil Grabara doesn’t appear to be too lacking in self-confidence if quotes on Tuesday are anything to go by.

The young goalkeeper has told Katowicki Sportem that he doesn’t think Alisson is much better than him between the sticks.

“If I say what I want to say, they will point out to me that I mistook the floor with the ceiling, but I will say: I really do not see any great difference.

“This level is often determined by details, and experience is one of the most important.”

To be fair to Grabara, he does state that his words could easily be taken out of context, but it’s good to hear he has so much faith in his own ability.

Reports in Calciomercato claim Liverpool are not interested in bringing Suso back to the club.

The Spaniard has flourished since leaving the Reds in 2015, becoming a key player for AC Milan and attracting interest from top clubs across Europe.

Despite having a release clause of approximately £33.8m in his contract at Milan, Klopp is unwilling to trigger it, with the Liverpool boss content with his current options.

Suso never managed to fully settle at Anfield, despite showing hints of his class during the 2012/13 season. In total, he made 21 appearances, scoring just once.

Firmino To Start For Brazil

Brazil face Cameroon in a friendly at Stadium MK on Tuesday night, with Roberto Firmino a confirmed starter for the Selecao.

Manager Tite says it feels right to give the 27-year-old an opportunity to lead the line in place of Man City‘s Gabriel Jesus.

“Roberto Firmino is still a new player in the national team and so it’s only fair to give him his chance to get used to that position and to create his understanding with the players around him,” said Tite.

Alisson will not start in goal, however, which Klopp will no doubt be relieved to hear, ahead of Saturday’s Premier League trip to Watford.

Fabinho is also in the squad and could feature, after being an unused sub in Brazil’s match last week.