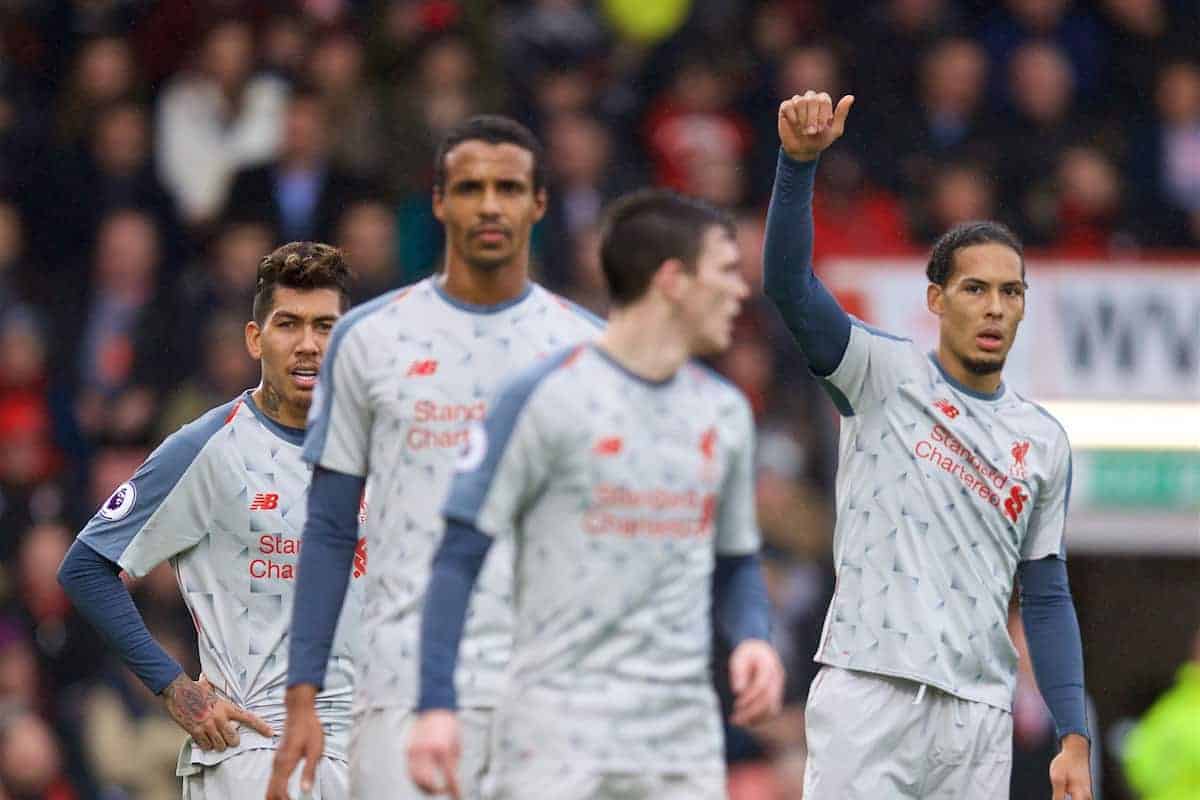 Liverpool produced a statement display as they won 4-0 at Bournemouth on Saturday, with a fine team performance moving them top of the Premier League.

The Reds arrived at Dean Court on the back of four consecutive victories over Fulham, Watford, Burnley and Everton in the league, and with Man City playing Chelsea later in the day their opportunity was clear.

Though their approach has been more pragmatic than blistering this season, Liverpool were back to their attacking best, with a Mohamed Salah hat-trick and a Steve Cook own goal securing the three points.

Now sitting on the Premier League summit, the Reds can look to high-profile clashes with Napoli and Man United in the week ahead full of confidence.

This is relevant on both a collective and individual level, as while the team was the star, the likes of Virgil van Dijk, Fabinho, Naby Keita and Roberto Firmino all joined Salah as standouts.

But what did journalists, statisticians and fans make of the Reds’ latest win? 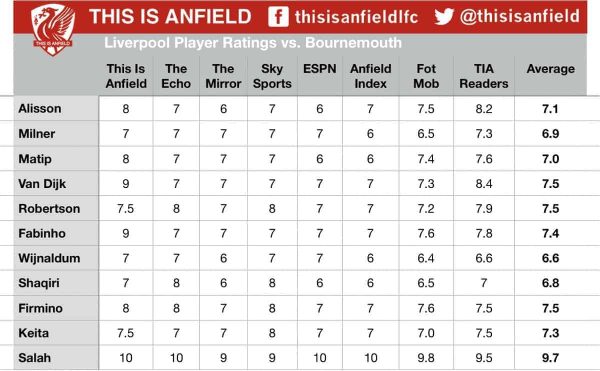 Scoring his first hat-trick since March, this was a near-perfect performance from Salah (9.7), and this is reflected in 10-out-of-10 ratings from four out of six publications.

“His 42 league goals for Liverpool have come in just 52 games, faster than any other player in club history,” ESPN’s Glenn Price wrote.

“He keeps breaking records and will continue to do so, given his eye for goal.”

Anfield Index’s Oliver Emmerson noted how Fabinho “controlled, dictated and knew exactly when to spring an attack,” and added that “it’d be a crime not to start him for the two crunch games next week.”

Both Alisson (7.1) and Joel Matip (7.0) were also given a positive assessment, with the Liverpool Echo‘s Connor Dunn praising how the latter “looked assured” at the back in his fifth start of the season.

His three goals clearly give a favourable weighting, but Salah also fared similarly on a statistical basis, having created two chances, won seven duels, completed five of his six attempted dribbles and made three ball recoveries.

Interestingly, the whole of the Reds’ right-hand side of Milner, Shaqiri and Gini Wijnaldum were considered the worst performers by FotMob.

Milner lost four of his duels and won just one, as did Wijnaldum, while Shaqiri won two and also lost four, though interestingly the latter duo both made a key pass.

It remains to be seen how many of Jurgen Klopp‘s starting lineup at Dean Court are retained for Tuesday night’s vital Champions League clash with Napoli at Anfield.

But if he opts to keep faith with the majority, he should be confident of another comprehensive display after a wholly impressive afternoon on Saturday.