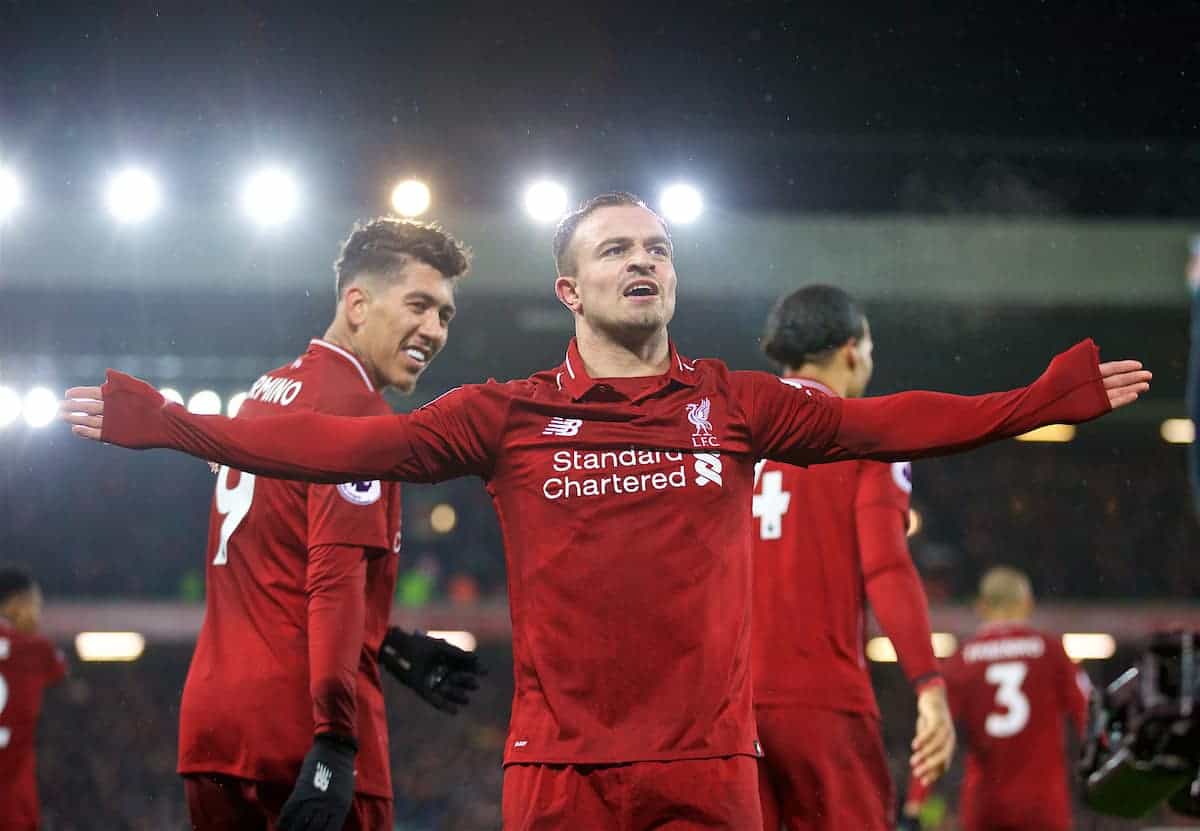 As has so often been the case in recent times, Mourinho set his Man United side up to put bodies behind the ball, sit deep and hope to snatch something at the other end.

The visitors showed virtually no desire to keep possession, regularly tossing the ball long and out for throw-ins under the slightest amount of pressure.

Liverpool, meanwhile, played like a team befitting of their status as current league leaders, pressing with intensity and attacking with a swagger.

With 65 per cent possession and 36 attempts on goal to United’s 35 per cent and meagre six shots on goal, the statistics backed up Liverpool’s dominance which was finally reflected on the scoreboard following Shaqiri’s late brace.

While Mourinho’s United have long been criticised for their style of play, their defensive solidity of last season has evaporated and Liverpool were relentless in exposing their weaknesses at every opportunity.

After a gradual period of integration into the Liverpool team, Klopp has begun to use Fabinho more regularly over the past couple of months.

The Brazilian has grown in stature with a number of impressive performances, but this was his standout display of the season so far.

A magnificent assist for Sadio Mane’s opener, carving out the opportunity with a delightful chipped through ball, showcased Fabinho’s vision and passing technique as Liverpool made the breakthrough.

While he is known for his tackling ability and intelligent defensive positioning, completing three tackles during the game, Fabinho also offered a great deal in an offensive sense.

He completed all three of his attempted take-ons, marauded forward on the ball and constantly keeping Liverpool on the front foot against a passive opponent.

If he can continue to deliver big performances such as these, Fabinho will slowly but surely justify his price-tag and continue to dismiss any lingering concerns about his slow start on Merseyside. 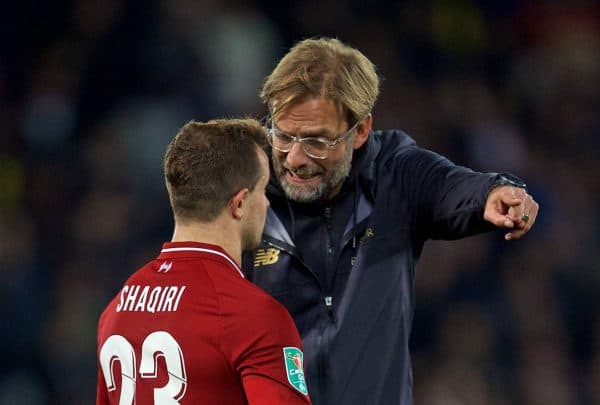 Klopp was never going to settle for a draw on this occasion, such was Liverpool’s utter dominance over their opponents and the ever-present Manchester City factor.

Liverpool shrugged United’s equaliser relatively quickly and began where they left off in the second half, but weren’t quite able to find the next goal.

Waiting until 70 minutes, Klopp then introduced Shaqiri for Naby Keita, who had been bright throughout, but the Swiss international’s dynamism and explosiveness in the final third were what made the difference.

Arriving in the box at the perfect time to drive his shot in off the crossbar via two deflections, Shaqiri wasted no time in regaining Liverpool’s lead just three minutes after his introduction.

He then also drilled in his second via another deflection just minutes later, to wrap up the three points.

Just as Klopp’s decision to bring on Divock Origi proved decisive in the Merseyside Derby, this was yet another example of where the manager has been able to win the game from the bench late on by utilising his squad depth.

The final name crossed off the list for the boss

Despite Manchester United’s ongoing difficulties in the post-Sir Alex Ferguson era, they have been a constant source of frustration for Liverpool in recent encounters.

This was Liverpool’s first league win against their arch-rivals at Anfield since September 2013, when Daniel Agger headed the winner in a 1-0 win—thus the victory carries an extra layer of meaning after such a long time coming.

For Klopp, this was his first win against Mourinho in the Premier League at the sixth time of asking, despite having beaten them at Anfield back in the Europa League in 2016.

It also means that Klopp has now beaten every side he has ever faced in the Premier League, and while the victory itself was crucial, the manner of it will have pleased the manager even more.

It was a real marker point of how far Liverpool have come under his tenure, to exert their superiority over their rivals in such an emphatic and bullish manner.

These games have so often been tense, turgid encounters decided by single moments in recent seasons, but for Klopp this was among his finest days in the job as Liverpool systematically dismantled United through a supremely assured, dominant display.

City’s 3-1 defeat of Everton on Saturday temporarily saw Pep Guardiola’s side regain pole position in the table, ramping up the pressure on Liverpool to deliver against Mourinho’s men.

Liverpool, though, showed no signs of buckling under any kind of pressure, instead performing like a team determined to keep setting the pace at the league’s summit.

It caps off a terrific week for Klopp and his team, on the back of last weekend’s demolition of Bournemouth and the feel-good factor which came with Wednesday’s 1-0 victory over Napoli.

Liverpool can now look forward to the last 16 draw before an opportunity to further extend their lead at the top of the league table, with Friday’s trip to Wolves.

Unbeaten with 45 points from 17 games, Liverpool’s best-ever start to a league campaign continues, with the Reds now performing at a rate of 2.65 points per game—which extrapolates to 100 points over the course of a season.

The performances are now matching the results after a strangely prolonged period in which Liverpool appeared to be lacking in cohesiveness, which can only be good news heading into the most intense period of the season.