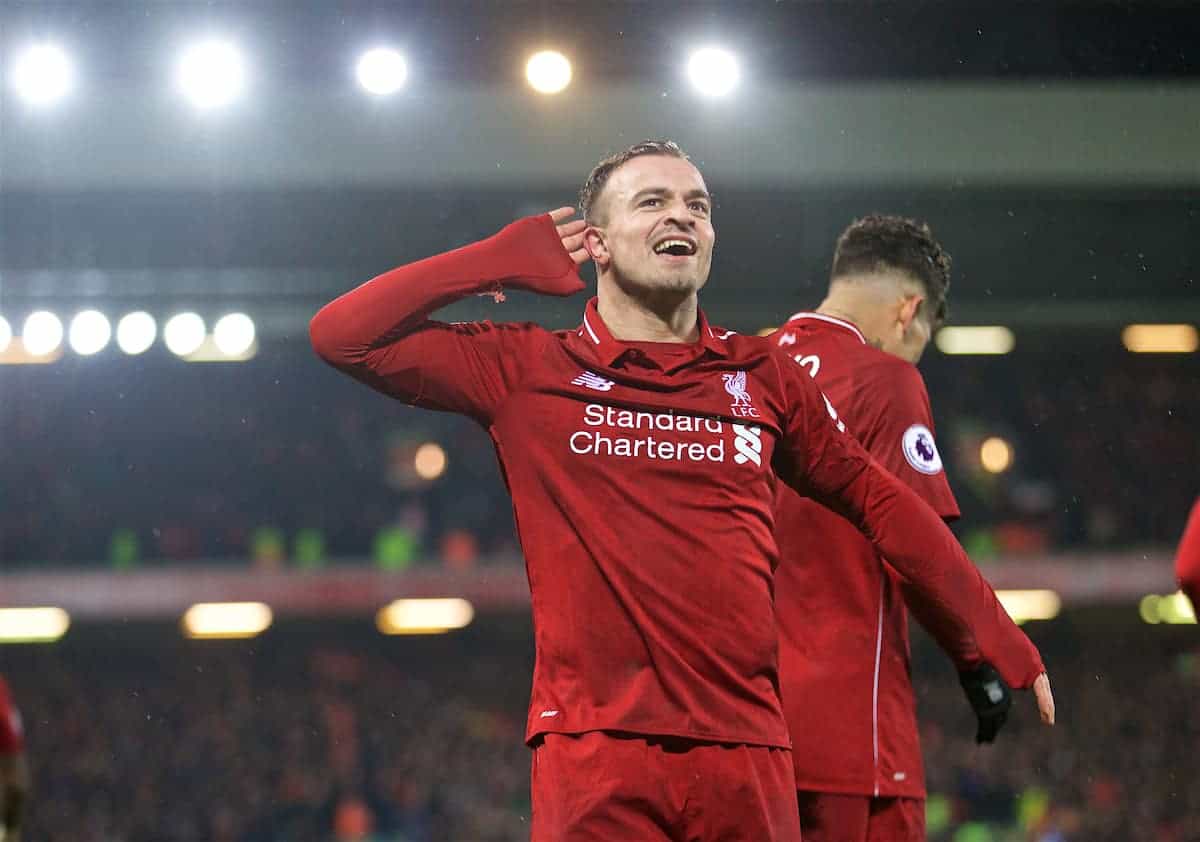 Liverpool regained top spot in the Premier League after they dominated Manchester United and earned a deserved 3-1 win at Anfield on Sunday.

After Manchester City‘s win over Everton on Saturday saw them leapfrog the Reds into top spot, Jurgen Klopp‘s men knew only victory would do against the Red Devils on Sunday.

Wins over Everton, Burnley, Bournemouth and Napoli in the last two weeks meant the Reds headed into this fixture in great form, but an overdue one against United would mean so much more.

The boss made four changes to his starting XI, opting to start Naby Keita on the left and Sadio Mane on the right of a four-man midfield, with Roberto Firmino supporting Mo Salah through the middle in attack.

And despite a first-half setback with Alisson‘s error, the Reds were by far the superior team and ran out confident and deserved victors to go back to the top.

Pre-match talk had centered around it being a tight game with few opportunities—but the opening exchanges were anything but.

United, in fact, had the ball in the net inside three minutes, but the offside flag went up against Romelu Lukaku who attempted to put the finishing touch on a free-kick which eventually drifted in unaided.

The Reds were on the front foot soon after though, and twice went close to taking the lead themselves.

Mohamed Salah found himself through on goal after a turnover, but lost his footing and Fabinho‘s shot was eventually deflected wide. Roberto Firmino had a low drive saved and United scrambled clear a couple of corners, as the pace of the game favoured the home side.

Firmino had made a great start to the game and he was instrumental in the Reds taking the lead a quarter of the way through the game.

Having helped win a throw down the left, he spread play infield and Fabinho clipped a tremendous pass over the defensive line, for Mane to run through, control on the chest and slot past David De Gea. 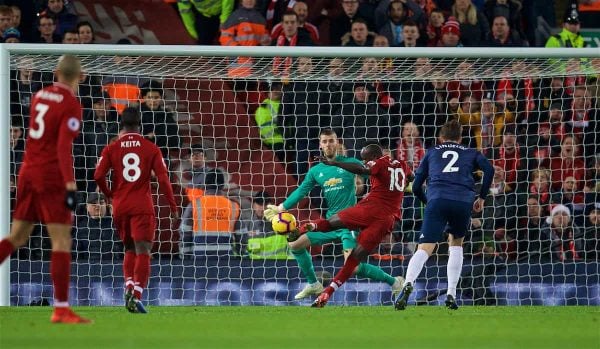 The Reds were running riot and it looked only a matter of time before they claimed a second goal—but out of nothing, United were gifted an equaliser.

A low cross from the left looked utterly irrelevant from a defensive perspective, but Alisson somehow spilled the routine catch straight to Jesse Lingard’s feet, who slid in for 1-1.

The error took some of the impetus out of Liverpool’s play, and indeed the pumped-up nature of the Anfield crowd, and the game drifted toward half time with the scores level.

It was important the Reds came out strongly after the break following such a dominant first-half display and that was certainly the intent.

Firmino fashioned another chance for himself with some close footwork inside the box, but De Gea saved his shot and Keita, from the rebound, saw his shot blocked by a sliding Ashley Young.

Almost the entire back four, plus Fabinho, tried their hand with long-range shots, but none really suggested a change to the scoreline was imminent.

As the hour mark rolled around, Liverpool were still utterly dominant but De Gea hadn’t again been called upon; a succession of corners failed to create danger and Klopp then turned to his bench for the first time, introducing Xherdan Shaqiri.

The Swiss international came on down the right-hand side—and made an immediate impact.

Mane, now on the left, dribbled to the touchline and fired over a cross, which was deflected to Shaqiri’s right boot; his weaker foot it might be, but the winger kept his effort on target and it deflected in, via a defender and the crossbar, to put the Reds back in front.

The super sub wasn’t done there, either; with 10 minutes left on the clock he created space for himself and curled in a second deflected strike to send the Kop wild.

Liverpool were comfortable from that point onward and injury time was played out to the sound of the home fans singing for their rivals to not sack their beleaguered boss.