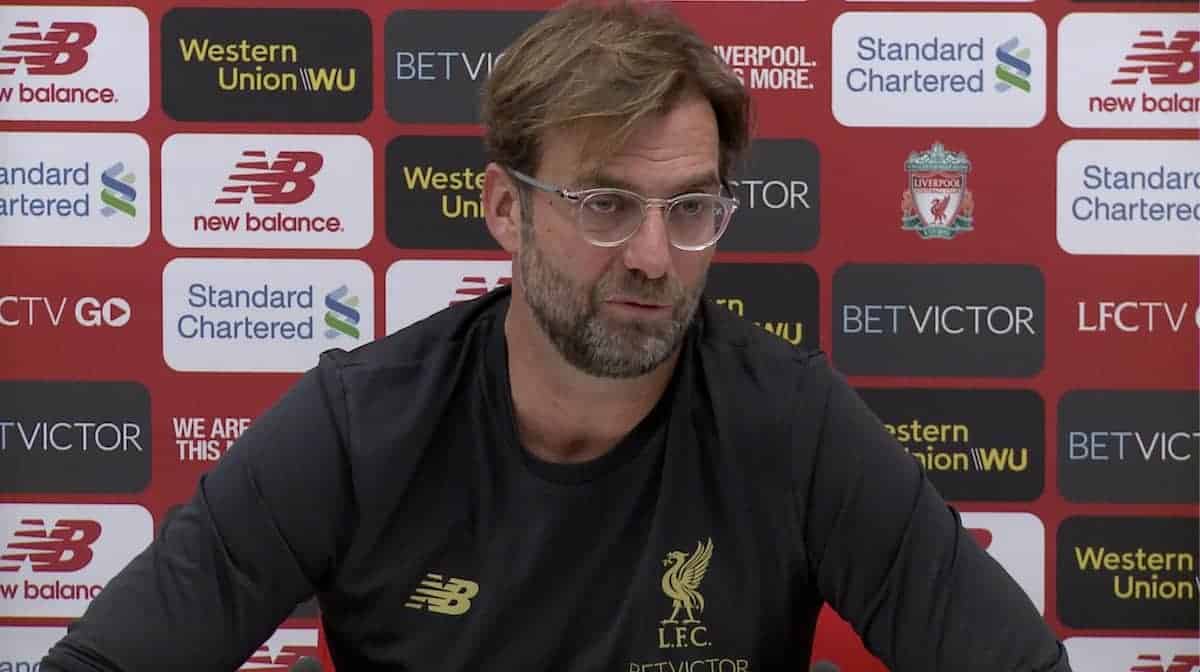 Jurgen Klopp was on good form in his pre-Bournemouth press conference on Friday, giving an injury update that was both positive and negative.

Liverpool make the trip to Dean Court for a testing encounter on Saturday lunchtime, with the Cherries sitting seventh in the Premier League.

Wednesday’s battling 3-1 win away to Burnley made it four league wins in a row for Klopp’s men, also securing the club’s best-ever start to a season after 15 games in the process.

They will need to be at their best this weekend, with Bournemouth a team capable of hurting the heavyweight teams on their day.

Klopp sat down for his obligatory press conference in good spirits on Friday afternoon, touching on a number of topics.

Injuries were very much the order of the day, with the 51-year-old confirming that Dejan Lovren and Nathaniel Clyne were out – Sadio Mane is a major doubt, too – but key pair Gini Wijnaldum and Andy Robertson will be available.

“He [Lovren] will not be available,” Klopp told reporters.

“He got a knock last week and got a concussion and is still not able to play, like Clyney, who has been out for two weeks already.

“It’s nothing serious but he’s not in training so he’s unavailable as well, along with Joe [Gomez], [Alex] Oxlade-Chamberlain and Rhian Brewster.

“Dom [Solanke] is close and I hope he will be in team training from Sunday onwards, but we will have to see.

“Sadio [Mane] doesn’t sound like he will be ready tomorrow, Gini Wijnaldum is OK and Andy Robertson is fine.”

Klopp also touched upon the brilliance of Alisson in the Liverpool goal, following his stunning last-gasp save at Burnley in midweek.

“The best thing is not to talk about a goalkeeper,” he added.

“But after the last game, he played a big, big part in the game. The goal Burnley scored should have been disallowed. He stayed in the game, and made brilliant save at 2-1.”

Finally, the Reds boss revealed he has the right-back situation under control, despite injuries to Clyne and now Joe Gomez.

“I have a plan. We have options – a lot of players can play that position,” he said.

Saturday’s clash with Bournemouth is another huge game for Liverpool, with every match feeling like a cup final at the moment, such is Man City‘s level of consistency.

The Reds know they will go a point clear of their title rivals with a win, with Pep Guardiola’s side heading to Chelsea later in the day.