Jurgen Klopp is set to rotate his starting team for Liverpool’s FA Cup tie with Wolves, handing a chance to fringe players to shine.

The FA Cup is not a priority focus currently but provides a useful chance for the Reds to regroup and react positively after a tough title showdown with Man City.

It also provides an ideal opportunity to rest some key players after the hectic festive period, which Klopp has suggested he will take having stated “we have to make changes.”

A much-changed team is likely to feature, with Klopp having already confirmed that Simon Mignolet and Alberto Moreno will both start on Monday night.

So how could the rest of Liverpool’s starting XI look at Molineux? 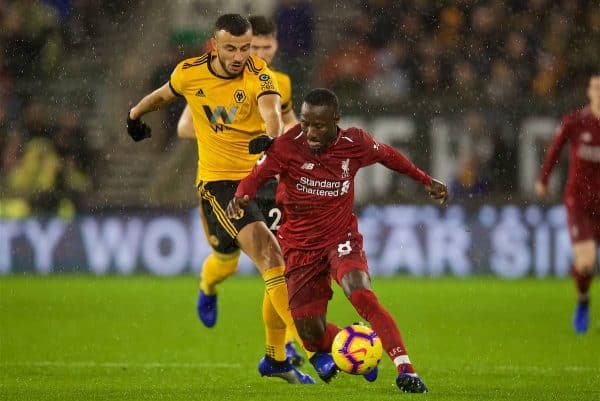 Valuable minutes are set to be afforded to those who didn’t feature heavily at City and the fringe members of the squad.

Divock Origi is another option, while certain regulars such as Dejan Lovren and James Milner could be called upon.

With plenty of switches to be made, Klopp could change formation to best accommodate those set to be introduced.

The Reds to Rest 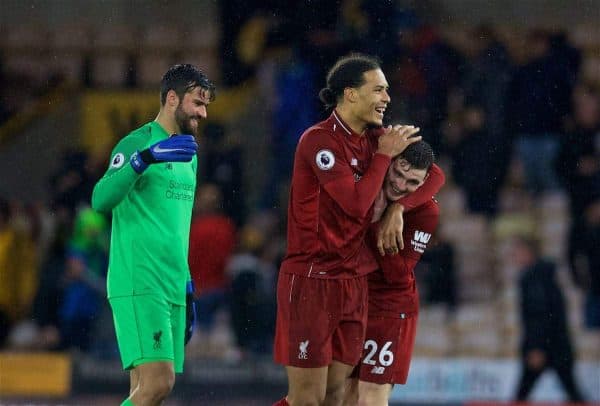 Klopp will, rightly, rotate with the aim of handing several key players a rest.

Mignolet and Moreno’s confirmed starting places means Alisson and Andy Robertson will be given a deserved break.

Defensive colleagues, Virgil van Dijk and Trent Alexander-Arnold could also be handed a breather, though centre-back options are limited.

Virtual midfield ever-present Gini Wijnaldum is another main contender for a rest.

Plenty of changes will be made, and rightly so, but a strong and experienced lineup could still feature.

While Mignolet and Moreno will enter defence, the rest of the back-line could boast a familiar look with Alexander-Arnold, Lovren and Van Dijk all starting given the lack of senior alternatives.

A near-first-choice midfield could be made up by Fabinho, Keita and Milner – with this a big chance for the Guinean to rediscover form after a stop-start time recently.

The front three will see a complete overhaul, and Klopp could deploy Shaqiri and Lallana in support of Sturridge.

That would see seven changes made from the City loss and would crucially allow several key players a welcome rest.

At the same time, it would also see a strong XI fielded to give the Reds a good chance of bouncing back to winning ways. 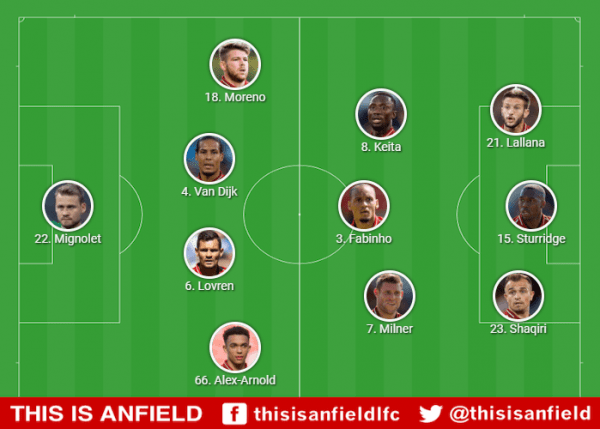 There is the possibility that Klopp opts to rest as many of his main men as possible to keep his first-choice options fresh for the more important title charge.

That could mean that we see further alterations made, resulting in a more improvised starting XI boasting an element of youth and gap-filling selections.

Along with Mignolet and Moreno, Camacho could enter the defence at right-back, while Fabinho could be deployed as a stand-in centre-back, allowing Alexander-Arnold and Van Dijk time out.

Moving the Brazilian to the heart of the defence would force a reshape in midfield.

Milner, Keita, Shaqiri and Lallana could slide into a four, moving the Reds to something closer to 4-4-2.

This would allow Origi to play from the off alongside Sturridge, and mean the Reds start with this XI: 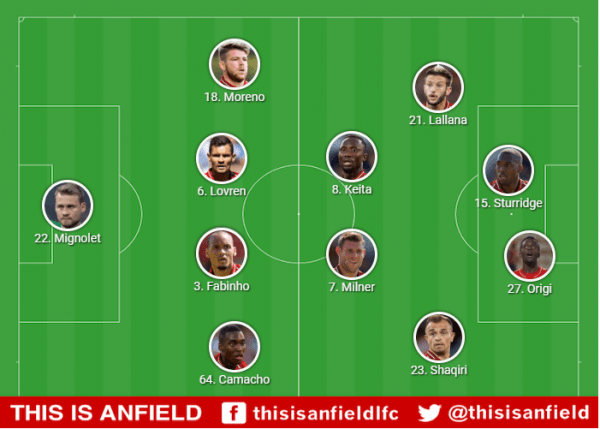 While the FA Cup isn’t top of Liverpool’s priorities this season, Klopp will still want to win the game to start rebuilding winning momentum.

And though the possible lineups feature heavy rotation, both boast enough quality to ensure that happens to carry the Reds into the fourth round.