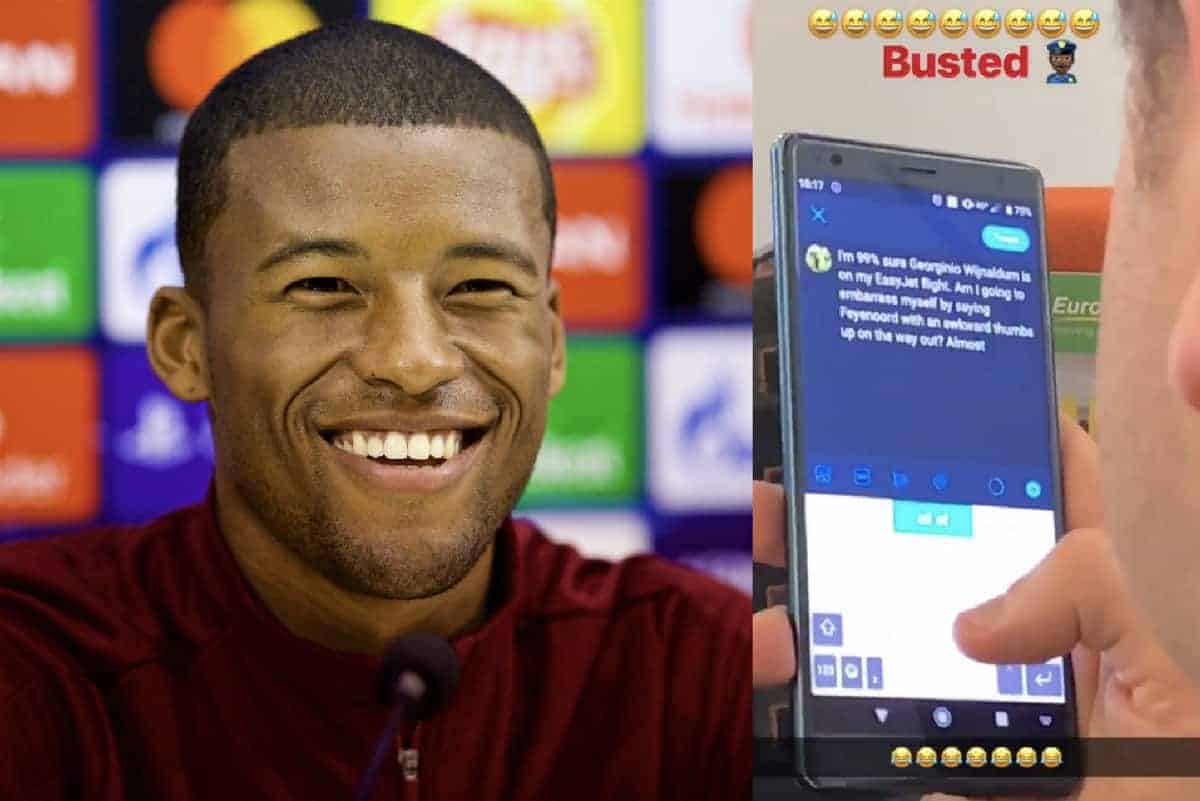 Gini Wijnaldum has shared the moment he was ‘spotted’ on a flight this week, with the Liverpool midfielder revealing his encounter with a fan on social media.

The Reds have enjoyed a rare break in their schedule this week, with 10 days off between games allowing them a trip to Dubai for warm-weather training.

Wijnaldum is believed to have been part of the squad in the UAE, with the 28-year-old rehabbing knee injury that he is expected to recover from in time for the visit of Leicester on Wednesday night.

But he appears to have been travelling back from a stop-off in his native Netherlands, having been recognised by Twitter user Ben Dudley (@Ben_Dudley010) on an easyJet flight on Friday.

But with Dudley only “99 percent sure” it was Liverpool’s No. 5, he took to social media to ask whether he would “embarrass himself” if he approached him:

Unbeknownst to him at the time, Wijnaldum filmed Dudley typing the tweet and shared it to his Instagram story, along with the caption ‘busted’:

“99% sure Georginio Wijnaldum is on my flight”

Gini catching someone tweeting about him ?? pic.twitter.com/t1FTv5kFg5

Upon landing, he clearly plucked up the courage to speak to the Dutchman, sharing a photo of the two to mark the awkward moment a Premier League footballer broadcast him to 1.6 million followers:

This is a brilliant gesture that showcases Wijnaldum’s positive attitude, which has made him so popular at Anfield since joining from Newcastle in 2016.

A near ever-present for Jurgen Klopp‘s side this season, he missed the 4-3 win over Crystal Palace last weekend but will be looking to get back into action against the Foxes in midweek.

Liverpool are back in training at Melwood on Friday, after being given a day off on Thursday.