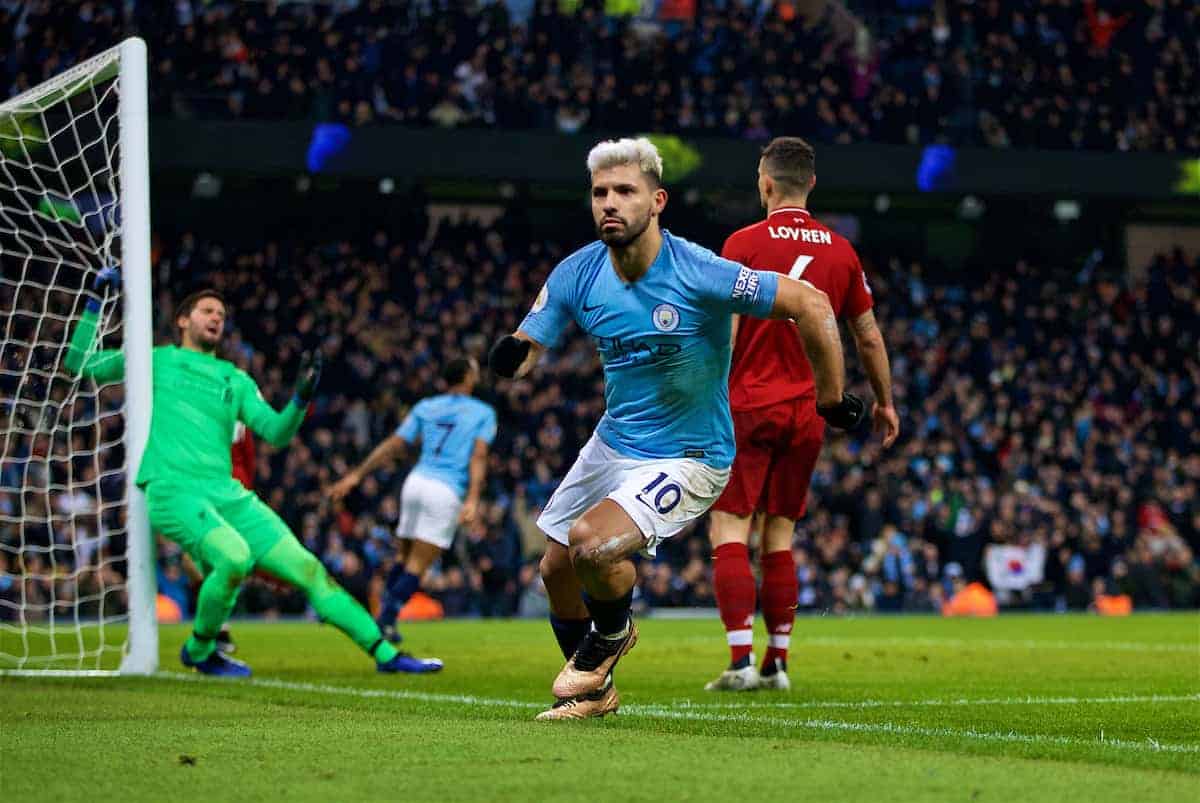 Man City edged a compelling title clash at the Etihad on Thursday night, as Liverpool fell to their first Premier League defeat in 21 games, losing 2-1.

After 20 games unbeaten in the English top flight, the Reds headed into a clash billed as their biggest of the domestic season, with a trip to the Etihad deemed crucial to their title hopes.

In truth, holding a seven-point lead over the hosts, Liverpool were in a relatively comfortable position regardless, but the onus was on Jurgen Klopp‘s side to produce a credential-proving display in Manchester.

Klopp made two changes to the side that thrashed Arsenal in their last outing of 2018, with Jordan Henderson and James Milner coming in for Fabinho and Xherdan Shaqiri.

Suggestions Andy Robertson could miss out due to the imminent birth of his second child came to nothing, with the left-back part of a strong XI to take on the reigning champions.

City had suffered back-to-back losses prior to their 3-1 win at Southampton at the weekend, highlighting a rare fragility, but this time around Liverpool’s was on show.

In a frantic start at the Etihad, City gained the upper hand early on, putting increasing pressure on the Reds’ back four and Alisson in particular, with the goalkeeper shanking an early clearance out for a throw-in.

Liverpool almost secured a vital opening on 18 minutes though, with Mohamed Salah sending Sadio Mane through, and though he beat Ederson, the winger’s effort came back off the post, and Salah’s follow-up was somehow kept out of the back of the net.

But City ultimately broke the deadlock shortly before the break, with Sergio Aguero picking up the ball on a tight angle after a measured attack from the hosts, beating a hapless Dejan Lovren and then Alisson with a powerful strike.

Klopp had his players out early at the break, having made no changes, and unsurprisingly there was little change in their meek approach, prompting the introduction of Fabinho for Milner before the hour.

It paid off within minutes, as a tactical shift to a 4-2-3-1 and a more adventurous approach saw Trent Alexander-Arnold loft a brilliant ball over for Robertson, who touched down for Roberto Firmino to score a diving header.

But they weren’t able to hold on for long, as an expansive break from City saw Leroy Sane through and Alexander-Arnold unable to intervene as he fired low and in off the post.

City’s goal to retake the lead came massively against the run of play, with Liverpool in control and looking primed to make it 2-1 themselves.

On came Xherdan Shaqiri minutes later, with Klopp making the surprise decision to withdraw Mane, setting up a final quarter-hour for Liverpool to push for a vital equaliser.

Salah had a good chance after a series of collisions in the midfield, but his left-footed strike was muffled by Ederson, and ultimately City held on for a decisive win.

A fantastic game of football between two excellent sides. City have won this battle, but Liverpool will hope to win the war come the end of the season in May.