Liverpool’s incredible rise under FSG has been analysed with their finances from 2017/18, which saw them move further up the Premier League hierarchy.

The Reds enjoyed an excellent campaign last time out, finishing fourth in the league after initially challenging for the title, and reaching the final of the Champions League in Kyiv.

Though they fell to defeat to Real Madrid in May, this marked the biggest step forward for the club since Fenway Sports Group took over in 2010.

With Jurgen Klopp in the dugout, Liverpool are thriving on the pitch, benefiting from the excellent business acumen of FSG, and sporting director Michael Edwards.

The excellent Swiss Ramble (@SwissRamble) has explored the figures behind the Reds’ world-record pre-tax profit of £125 million for the 2017/18 season, to assess the progress made.

This is the fourth time in the last five years Liverpool have posted a profit, amounting to £204 million over that period, having lost £176 million over the previous five.

A major contributing factor within this is Edwards’ brilliant work in player sales, with the Reds making the second-most profit in sales over the past four years (£261m), behind only Chelsea (£272m) in the English top flight.

But commercial and matchday income proved influential, too, with the former rising £13 million up to £154 million, and though this is only the fourth-highest in England, this is set to increase further—namely with a new kit deal that should raise £30 million a year.

Liverpool’s matchday income rose £7 million to £81 million; it was £62 million before the Main Stand expansion and £43 million when FSG bought the club, which puts into context the growth which leaves them now third-highest in the league.

Their progress on the pitch has seen continued investment in terms of staff, with Liverpool’s employee headcount rising from 744 to 837 last season, and the wage bill rising from £208 million to £264 million. 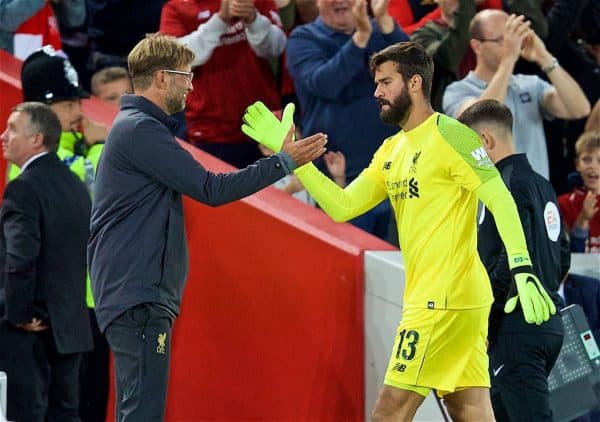 This is now the second-highest wage bill in the Premier League, and is set to increase in 2018/19’s accounts following the signings of Alisson, Fabinho, Naby Keita and Xherdan Shaqiri and a host of new contracts.

They have made the highest wage growth of the ‘big six’ over the past three years.

Furthermore, Liverpool set a club-record for player purchases at £195 million, though this was only fifth in the league, including behind Everton (£215m).

And gross debt is down £27 million to £155 million, and while this is the sixth-highest in the Premier League, it is less than three times as much as first-placed United (£496m).

Given the Reds’ improvement on the pitch, it is hugely encouraging to see this is being accomplished in a more self-sustainable model.

FSG should be applauded for this, having turned the club around dramatically over the past eight-and-a-half years.

All credit to Swiss Ramble (@SwissRamble) for analysis of Liverpool’s accounts.