Liverpool defender Andy Robertson insists the players’ belief and resilience means they will never give up on a result until the final whistle.

The Reds scored their third goal to win a league match in the 90th minute or later this season—their second most after 2008/09 when they managed four—to snatch a 2-1 victory over Tottenham and take them back to the top of the table.

Late interventions seem ingrained in the club’s DNA as that was their 33rd winning goal in the 90th minute or later in Premier League history, eight more than any other club.

However, few will have the significance of Toby Alderweireld’s own goal should Liverpool go on to win the title for the first time since 1990.

One thing is certain and that is the players will not give up in that quest for a long-awaited league championship.

“I think it comes from the whole squad having the right attitude and belief that we are good enough to win any game,” said Robertson.

“Our fitness levels are the best they should be at this point of the season, so we know we can go right to the end.

“Sometimes you just need that bit of luck and we got it but even when we were going through the tough times in the second half, we still believed we were going to win the game and that’s the mentality we have.

“Looking at the league table that’s all that matters. Performances don’t really matter at this point of the season as long as we win.” 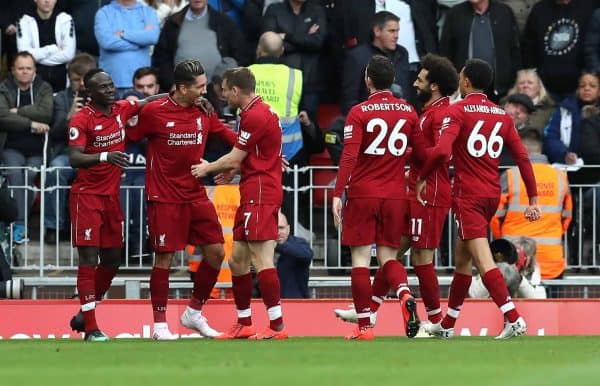 Victory put Liverpool back on top of the table with a two-point advantage over City, who have a match in hand.

With the game against Tottenham at 1-1 heading into the 90th minute it seemed like a pivotal moment in the title race, as Jurgen Klopp’s side looked set to drop two points, and the psychological boost of a late winner cannot really be quantified.

However, Robertson does not believe the result will have adversely impacted on their title rivals.

“I think they have the same attitude as us in that we can only control what we can do,” added the Scotland captain.

“They put in a good performance against a struggling Fulham team [on Saturday] and they got the three points.

“They had the advantage of going first this week and maybe they were hoping Tottenham could come here and get something and it looked that way for long periods of the second half.

“Who knows what that will do to them but I know for us it is just a big three points for us and it pushes on for the next six games.”

Klopp praised the Anfield crowd for their reaction to conceding an equaliser, saying it was the best response he had witnessed in his time at the club, and the pandemonium which erupted after the winner showed how important the win was.

But Robertson said no one got carried away with the celebrations.

“We are obviously buzzing with the three points but nothing has been won, just a game, and we have a long way to go,” he said.

“There won’t be over-celebration. It is a big thing against a rival but we need to keep going and let’s see where it takes us any way.”