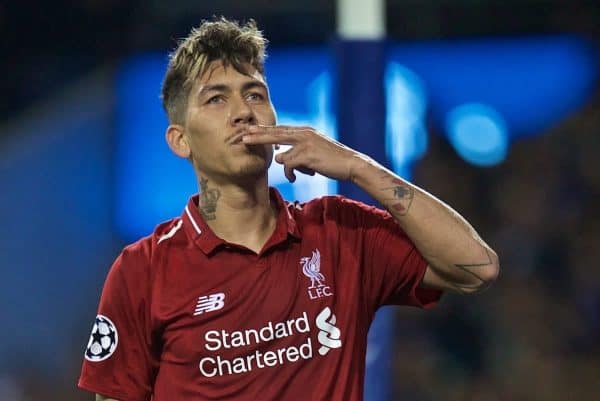 Firmino to return to but midfield headache to solve – Predicting Liverpool’s lineup vs. Barcelona

Roberto Firmino looks set to return to Liverpool’s starting XI for the semi-final first leg in Barcelona but Jurgen Klopp has big midfield decisions to make.

The pursuit of a dream double continues on the European stage as the Reds open a mouthwatering tie at the Nou Camp.

Liverpool’s last trip to the historic stadium 12 years ago proved memorable, but only a perfect performance will be enough to ensure another special night.

The good news is that Klopp has a full squad at his disposal to help him achieve that, thanks to two big injury boosts.

Several strong lineups will therefore be available but it all depends on how Klopp approaches the tie, meaning some key midfield decisions need to be made.

A 23-man group has been named and it includes Firmino and Fabinho after both took part in the final training session before departure.

The No. 9 will be assessed ahead of kickoff but should be ready to start, while the defensive midfielder could return to the lineup.

Alex Oxlade-Chamberlain is in the squad but featuring in such an intense game may be a step too far at this stage.

Rhian Brewster is also included, with Adam Lallana the only absentee.

After a rest against Huddersfield, Joel Matip should return to partner Virgil van Dijk, with Dejan Lovren dropping out.

Daniel Sturridge could keep his place if Klopp takes a cautious approach to Firmino, with Divock Origi and Xherdan Shaqiri offering alternatives.

Trent Alexander-Arnold and Andy Robertson are likely to take the full-back berths—though Joe Gomez could be considered.

Mohamed Salah and Sadio Mane will start in their usual roles.

The Potential Lineups vs. Barcelona

A final decision will be made on Firmino on Wednesday, but his inclusion and training appearance strongly suggests he will be fit to start.

It would provide an enormous boost, enabling Liverpool to play with a full-strength side at the Nou Camp.

The No. 9’s reintroduction would come at Sturridge’s expense, and would be one of three changes made by Klopp to restore his strongest side.

One of those is certain to see Matip step in for Lovren to restore the first-choice defence.

The other comes in midfield, where Fabinho should return as the midfield shield, opening a tough call on who the Brazilian replaces.

Keita is in great form and is certainly worthy of a starting place, but Klopp may opt for a more experienced pairing of Henderson and Wijnaldum ahead of Fabinho:

Once again, the only area for manoeuvre is midfield.

There are several possible combinations here, including the tried-and-trusted trio of Henderson, Wijnaldum and Milner.

It wouldn’t be a surprise to see this in operation, though with a new look in Wijnaldum sitting as the No. 6 and Henderson taking up box-to-box duties alongside Milner.

Both quarter-final victories over Porto were claimed without that traditional trio though, which could mean Klopp stays closer to what worked in those games.

Henderson and Keita shone as the double-eights in the Porto first leg and have become a strong pairing, which could see them start.

It could be that Wijnaldum is deployed as the defensive midfielder, preferred to Fabinho as a result of the Brazilian’s recent injury and for his greater agility and experience:

The most important thing is that Liverpool look set to be able to field a full-strength side—give or take the midfield—at the Nou Camp.

This should give Klopp’s men real belief that a positive result can be earned in Spain and, crucially, that the tie can be won to set up a shot at winning No. 6.