Jurgen Klopp should conduct some light rotation to his Liverpool team against Huddersfield, with changes likely to come in defence and midfield.

All the Reds can do now is continue winning to pressurise Man City into a slip, and victory against the Terriers is crucial to keep the heat on.

Friday night’s clash against the Championship-bound outfit marks the start of a relentless run-in for the Reds consisting of five games in just 17 days.

That tough schedule in the push for silverware—and with the semi-final first-leg at Barcelona coming next—should see Klopp make changes.

A close to full-strength lineup still looks set to feature though and this is how we think Liverpool’s starting XI could look.

Once again a near-full squad is at Klopp’s disposal, aided by a couple of injury boosts.

Dejan Lovren has returned to training after illness and should return to the matchday fold.

Fabinho has also trained after being forced off at Cardiff with a head injury, suggesting he should be fit to play.

The Brazilian will be assessed ahead of kickoff though, as will Adam Lallana who has been struggling with a muscle problem.

After a midweek trip to New York, Mohamed Salah is said to be fighting fit having re-joined training on Thursday.

Klopp said in his pre-match press conference that Alex Oxlade-Chamberlain is “all good” but the midfielder may not yet be considered, with the same for Rhian Brewster.

Most of the team picks itself but light rotation could be conducted with changes most likely to come in defence and midfield.

Joe Gomez, as well as fit-again Lovren, offer the options to enter defence.

James Milner is in contention to start after his goalscoring impact at Cardiff and could enter into midfield or even at left-back.

Xherdan Shaqiri, Divock Origi and Daniel Sturridge are all available should Klopp freshen up the attack.

So it would seem the ideal moment for Klopp to rotate more than usual and rest several key men ahead of the Barcelona first-leg and four tougher games to come.

There would be no better chance to preserve Virgil van Dijk or hand a couple of the front three a rest with the Reds still boasting enough quality to get past Huddersfield.

Despite the fact Klopp will have one eye on Wednesday’s Nou Camp trip, such changes seem improbable.

We are more likely to see a close to full-strength side play, with switches coming in defence and midfield.

It’s the perfect game to reintroduce Gomez from the off after successive sub outings, allowing Alexander-Arnold a welcome break after 11 consecutive starts.

Fabinho dropped to the bench at Cardiff before being forced off minutes after entering.

The Brazilian should be fit to play here and could do so alongside Jordan Henderson and Naby Keita, meaning Gini Wijnaldum would make way. 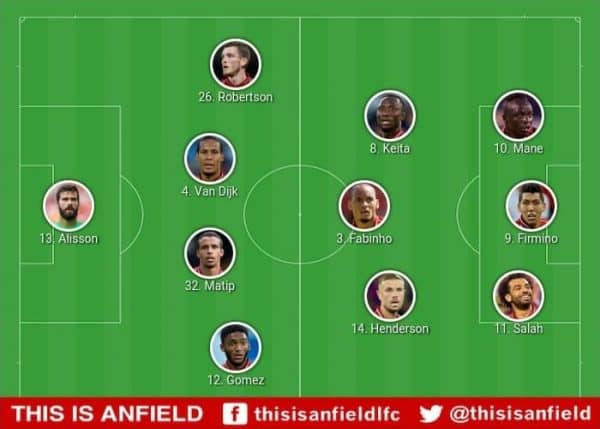 Despite there being no margin for error in the title hunt, Klopp will be thinking ahead to Wednesday’s tie.

Liverpool will need an impeccable defensive display in Barcelona, and this could lead to a bigger reshuffle at the back on Friday night.

Van Dijk and Joel Matip will surely be the centre-back partnership in Spain, so Lovren could enter to keep the Cameroonian fresh, given the No.4 is undroppable.

Full-backs are of course integral to Liverpool’s play and Klopp could give Robertson a chance to recharge and put Milner in his place.

Meanwhile, Wijnaldum could keep his place after scoring at Cardiff and could move back to his usual role alongside Henderson, with Keita dropping out. 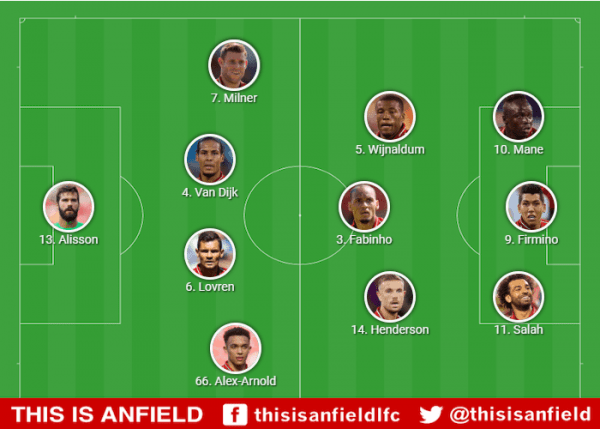 Time is running out for Liverpool in the quest for title glory, but all the Reds can do is keep winning, apply maximum pressure and hope City eventually crack.

Key to that is taking another three points against Huddersfield, and even if Klopp does make changes as suggested, the Reds have more than enough to get the job done.