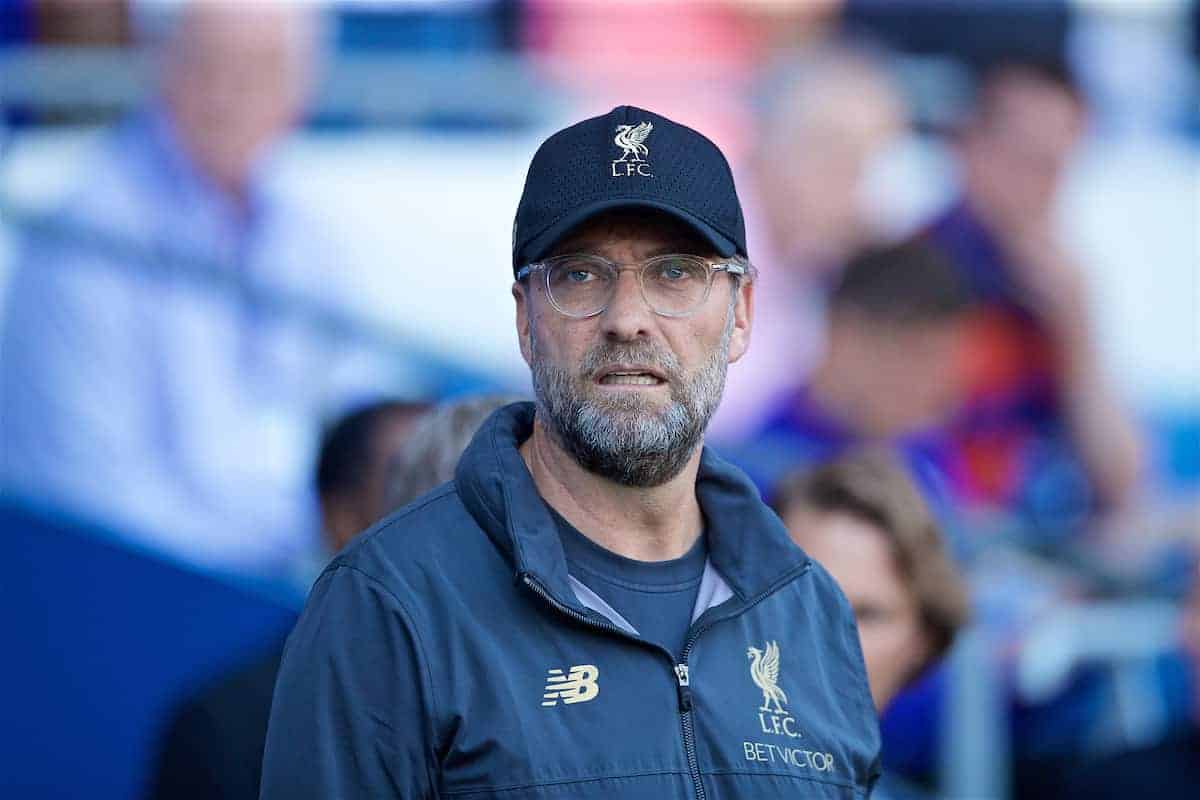 Jurgen Klopp promised Liverpool’s focus after reclaiming top spot in the Premier League will be on preparing for their game with Huddersfield and not on this week’s Manchester derby.

Liverpool’s 2-0 win at Cardiff on Sunday moved them on to 88 points, two more than title rivals Manchester City with three games left to play.

But City can reclaim pole position by winning their game in hand against neighbours Manchester United—who were thrashed 4-0 at Everton on Sunday—at Old Trafford on Wednesday.

Boss Klopp said: “Some people up in Liverpool might ask us if we are thinking about Barcelona [in the Champions League semi-final] or some bullshit like that.

“We will be completely focused on Huddersfield [on Friday], but up to then we have to rest and recover and prepare.

“On Wednesday there is a game as well. When we played Manchester United, they were in a much better moment than they are now and that was 0-0. We will see what comes out of that game, but we have no influence on other games.

“If United get a point and we go to Newcastle thinking we have it, then we could get knocked there.

“We just have to stay focused on our things, that’s what has worked so well so far and there is no reason we should change that.”

Second-half goals from Georginio Wijnaldum, only the Dutch midfielder’s third of the season, and a late James Milner penalty secured Liverpool victory over relegation-threatened Cardiff and clinched a ninth successive win in all competitions.

Furthermore, Liverpool set a new club points record in the Premier League—eclipsing the 86 that Rafael Benitez’s side managed 10 years ago in finishing runners-up to Manchester United.

“The points total is like a bill,” Klopp said. “You don’t know what it’s going to be, but when it comes, you pay it.

“In the end, we will see how many points we have and then we get what we get. If you are only motivated to win the holy grail then something is wrong with you.

“We are motivated to play for this club, we want to win football games because we enjoy the ride with the fans.”

Warnock said the pitch had been watered before kickoff, but his primary concern remains the relegation battle and closing games against Fulham, Crystal Palace and Manchester United.

Cardiff are in the final relegation spot and three points adrift of Brighton, who have a game in hand.

“We got over the 11-points target [Derby’s fewest points record] for the season,” Warnock said.

“One by one we still keep surprising people, so who is to say what is around the corner?

“There are so many twists and turns. Fulham have won two on the trot, so that’s not going to be easy.

“Then we’ve got Palace, who are probably the best away team in the league below the top six with the strikeforce they’ve got.

“It’s going to be difficult, but right exciting.”