Jurgen Klopp has described the availability of Alex Oxlade-Chamberlain as “perfect,” following an injury that rules Naby Keita until next season.

The manager confirmed on Friday morning that Keita would be sidelined for “at least two months,” which will keep him out for the remainder of the campaign.

Liverpool have two games left to play in the Premier League, starting at Newcastle on Saturday, and at least one more in the Champions League as they look to overturn Barcelona’s 3-0 first-leg win in the semi-finals.

But the positive in the wake of Keita’s injury is that Oxlade-Chamberlain made his comeback after almost a year out in last Friday’s 5-0 thrashing of Huddersfield.

The midfielder made the flight to Spain in midweek but was not named in the matchday squad, but Klopp said in his pre-match press conference ahead of the trip to St James’ Park that he will be considered for the weekend.

“Yeah of course, [it is] perfect that he’s back,” he told reporters at Melwood.

“But how I said the intensity of the game [must be considered].

“[It is] very good Ox is there, for sure [he will be] in the squad and we have to make a decision who starts.

“We will use him of course, that’s good.

“Nothing good to say about Naby’s injury, but that Ox is back is brilliant.” 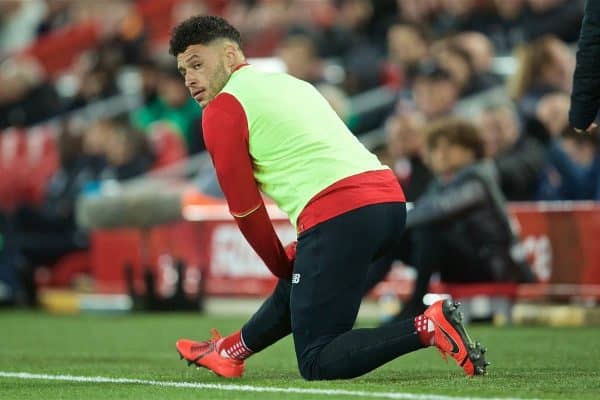 It still seems unlikely Oxlade-Chamberlain would make the starting lineup against Newcastle, given he has played just 17 minutes of first-team football since his return.

Adam Lallana is still expected to be sidelined, depriving Klopp of another midfield option, but Fabinho, Gini Wijnaldum, Jordan Henderson and James Milner are all fit.

However, the prospect of bring the No. 21 off the bench on Saturday night, providing a similar drive as Keita from the midfield, is a very promising one.