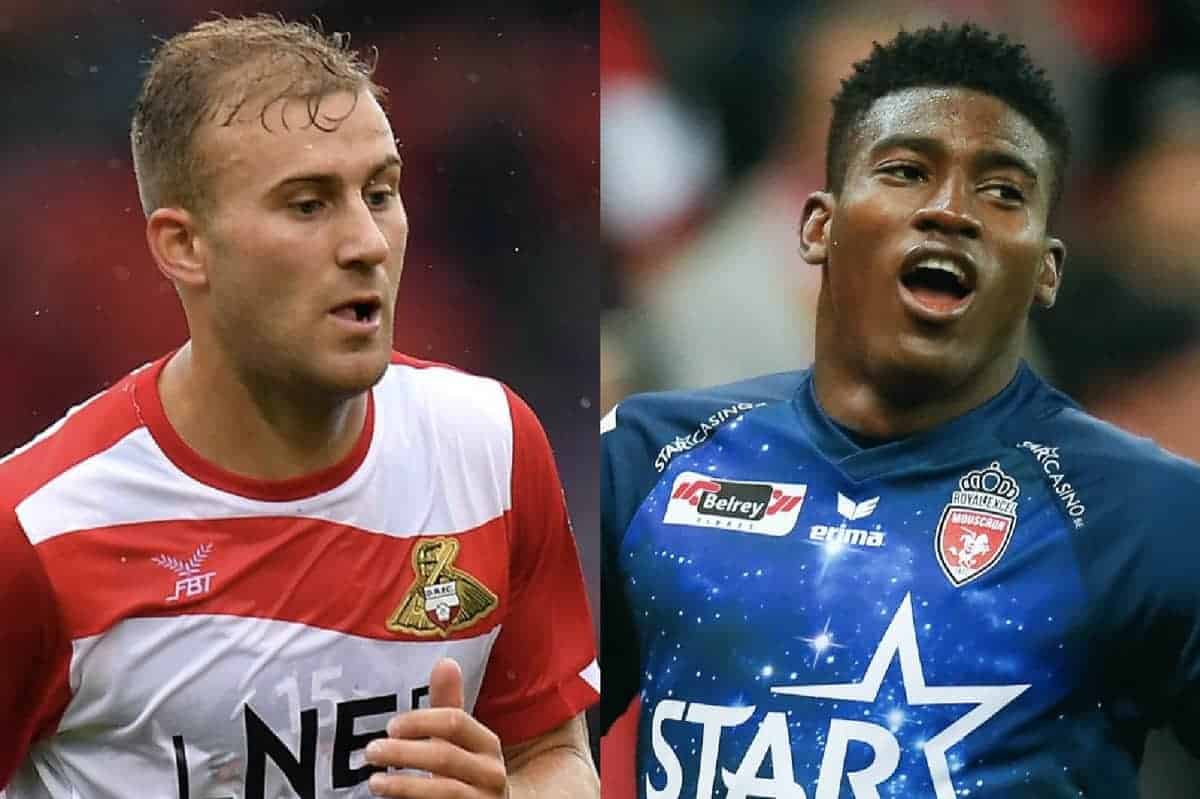 Liverpool loan duo Herbie Kane and Taiwo Awoniyi both ended their spells on Friday, and both did so in defeat as their impressive campaigns fell flat.

Kane and Awoniyi have been two of the standout performers from the Reds’ loanees this season, along with the likes of Harry Wilson, Ryan Kent and Marko Grujic.

With the former shining in his first campaign as a senior pro with Doncaster and the latter reviving his fortunes with Mouscron in 2019, they have made significant progress away from Merseyside.

Both face uncertainty over their futures this summer despite recently signing new deals with the Reds, but will have enhanced their prospects with excellent performances on loan.

Their time with Doncaster and Mouscron respectively comes to end this week, however, and both suffered losses in their final outings for their temporary clubs.

As Rovers headed to the Valley for the second leg of their League One playoff semi-final against Charlton, Kane’s side needed to overturn a 2-1 loss in the opener at the Keepmoat.

The 20-year-old made his 49 appearance for the club as he started alongside Tommy Rowe and Ben Whiteman in midfield, and played 80 minutes in a chaotic clash.

Charlton went ahead early through Krystian Bielik, but Kane laid on the equaliser—his 10th for the season—on the night as Rowe levelled, and a goal from Andy Butler in the 88th minute forced the game into extra time.

But despite another strike from John Marquis looking set to send Doncaster to Wembley, Darren Pratley struck a minute later to tee up a penalty shootout, which the Addicks won 4-3.

It proves a disappointing end for Kane’s time with Rovers, and according to the Hull Daily Mail, he could now make the switch to Hull City in the Championship next.

Meanwhile, over in Mouscron, Awoniyi started up front for his side in a Belgian First Division A Europa League playoff tie with his side’s fate already sealed.

But the Nigerian still scored twice in a 4-2 defeat to Waasland-Beveren to bring his half-season’s tally up to 11.

Mouscron finished their playoff group fifth of six, and Awoniyi is now likely to leave Liverpool on a permanent deal, with Schalke among the sides interested in a move the club hope could earn around £10 million.

Grujic will also play his last game on loan with Hertha Berlin on Saturday as they host Bayer Leverkusen, while Loris Karius‘ penultimate fixture of the season with Besiktas comes at Trabzonspor.

Kamil Grabara should make his 15th start for AGF Aarhus in the first leg of their playoff semi-final against Randers on Sunday, with the Danish Superliga side aiming for the Europa League.

Sheyi Ojo could play for Stade de Reims as they take on Bordeaux in their second-to-last Ligue 1 clash, while Kent and Liam Millar will end the Scottish Premiership season as Kilmarnock welcome Rangers.

Finally, Adam Bogdan closes his loan spell with Hibernian against Aberdeen, with the Hungarian then set to leave Liverpool on a free transfer.