Liverpool players were quick to laud the team’s “fighting spirit” on social media in the aftermath of the thrilling 3-2 win at Newcastle.

Jurgen Klopp’s side made the journey to the North East knowing that only an eighth straight Premier League win would ensure the Reds were firmly in contention for the title on the final day of the season.

And Liverpool got off to a flying start as Virgil van Dijk was free to head the ball into the back of the net with less than 15 minutes on the clock.

However, despite the positive start it was not the straightforward clash fans would have hoped for as Newcastle went on to level the scores on two occasions, as Mohamed Salah’s second-half effort was sandwiched between strikes from Christian Atsu and Salomon Rondon.

It set up a tense and nervy finish as the Reds desperately searched for the winner, and Divock Origi came up trumps when called upon to help seal another memorable victory.

The man of the moment was duly delighted to notch such an “important” goal for the club, but it was the team’s “fighting spirit” which stood out for Origi when speaking after the game.

“Today was a big fight. We knew it beforehand.

“We came here with a big heart, it wasn’t easy and you could see they were also willing to come back. But in the end we showed our fighting spirit and we got the three points.

“I just try to do whatever I can and I’m happy I’m scoring late winners. I’m happy for the team, it’s very important for us.

“We work so hard and we know it’s a crucial part of the season. And also for Mo who came out, we just felt like we had to fight for the three points.

“It’s a lot of emotion [being in the title race], but we have to control it. It’s very exciting, it’s a special season and until now we did very well.

“We want to finish it off in style. Let’s see how the remaining games go. We’ll do everything to win everything and hopefully it comes out our way.” 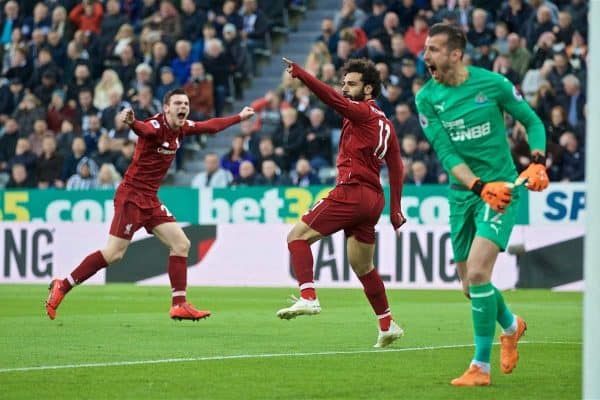 The sentiment was echoed by Andy Robertson as he spoke of Liverpool’s never say die attitude to LFCTV after another win which sets the Reds on course to finish the season with a staggering 97 points.

“I can’t explain it. If we don’t do anything next Sunday and City do get crowned champions, then we can be proud of what we’ve done.

“We’ve stuck together and hopefully we get 97 points and if that’s not enough then, you know, we’ve done everything we can- it’ll obviously be gutting but, my God, these lads don’t know when to give up.

“The subs make the difference and, you know, we’re always ready to get on the pitch and make a difference and the lads that have been left at home or on the bench who haven’t come on are buzzing for us.

“There’s no egos in this squad and that’s why we are where we are today, and long may it continue.

“If we do fall short this season we’ll be back next season and we just need to keep going and hopefully get what this club deserves.”

Taking to Instagram after the game, Van Dijk, Dejan Lovren and Sadio Mane all shared their delight at effort shown by the whole team to collect another “3 points,” and wished Salah a “quick recovery”:

What a win after a tough, tough game. We show once again that we never give up. We keep fighting. Wishing @mosalah a quick recovery. We need you back soon my friend. ??

MASSIVE 3 points and performance from the boys! Fought right till the end and got the rewards. ??? #ynwa

A post shared by Alex Oxlade-Chamberlain (@alexoxchamberlain) on May 4, 2019 at 3:35pm PDT

Jhheeezzz!! Manamans mash up but we showed big cojones today , what a result ???. #ynwa #lfc #ds15

And James Milner, Fabinho and Robertson insisted the Reds will “keep fighting until the end” as they shared their love for their teammates following the thrilling win:

We'll keep fighting till the end, lads. Great result. One to go! #YNWA

What a team, love every single one of them! We keep fighting till the very end ??? #YNWA

The Reds will now set their sights on turning around a three-goal deficit against Barcelona on Tuesday, before gearing up for the title-deciding weekend against Wolves in the final game of the Premier League season.