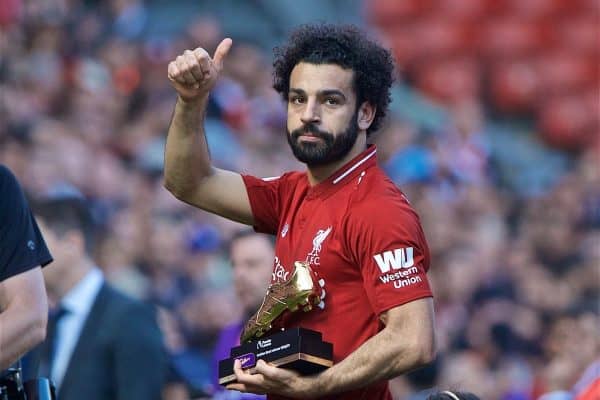 It was a bittersweet moment as the Premier League title eluded Liverpool, but Mohamed Salah and Sadio Mane both shared the Golden Boot award on Sunday.

Twenty-two goals from each of Salah and Mane, along with the same tally for Arsenal‘s Pierre-Emerick Aubameyang, saw a three-way tie for the prize.

This is the first time in 20 years that a trio of players share the award, after Michael Owen, Dwight Yorke and Jimmy Floyd Hasselbaink in 1999, though it served as scant consolation at Anfield.

Mane netted twice in a 2-0 victory over Wolves, but with Man City thrashing Brighton 4-1 at the Amex, Liverpool saw their hopes of a first Premier League title fade.

Joining Salah in being presented with the award on the pitch after the game, however, this did highlight the outstanding campaign the No. 10 has enjoyed this time out.

Of course for Salah this is a significant drop-off from his output in his first campaign with Liverpool, but his share of the Golden Boot is testament to his enduring, world-class talent.

Alisson also picked up the Golden Glove after keeping his 21st clean sheet of the league season, while Virgil van Dijk and Trent Alexander-Arnold were awarded with the Liverpool supporters’ prestigious Golden Sambas.