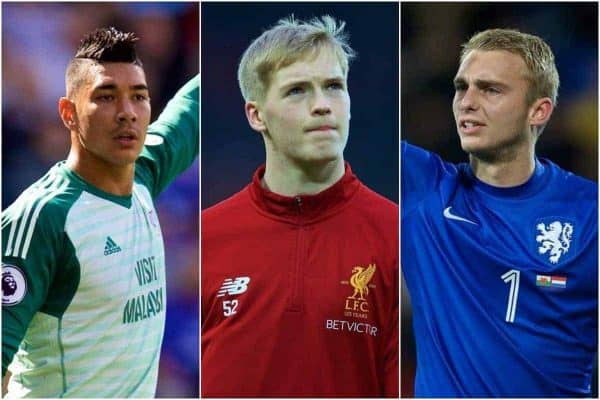 10 goalkeepers Liverpool could replace Simon Mignolet with this summer

Liverpool are expected to part ways with Simon Mignolet over the summer, leaving the role of an understudy goalkeeper needing to be addressed.

For a second successive summer, Liverpool are in the market for a new goalkeeper, only this time around the search is for an understudy to the Reds’ undisputed No. 1 stopper, Alisson.

With Simon Mignolet expected to depart Merseyside after six years in search of regular first-team football, the Reds will be left with a position to fill supporting their Brazilian superstar.

And the player brought in will be under no illusions as to what his role within the team will entail—unless injury or suspension strikes—after Mignolet made just two appearances last season.

Here, we pick out 10 goalkeepers who could step into the position set to be vacated by the Belgian this summer.

A return to the Championship for the Welsh side is expected to see Etheridge seek pastures new after a successful two-year spell with the club.

He will not be short of suitors having impressed in his debut season in the Premier League with his distribution and shot-stopping ability, which saw him make the second-most saves of any goalkeeper (141), despite Cardiff shipping a total of 69 goals.

At 29, he has an abundance of experience and would prove to be more than an adequate understudy; he would also fill a homegrown slot.

Verdict: He’s under contract until 2021 and as such would demand a fee anywhere from £10 million, but he would be a perfect backup option—he may need convincing to sit on the bench, however, after a standout campaign.

An experienced Premier League ‘keeper who would be available to Liverpool on a free transfer having recently parted ways with West Ham after six seasons.

The 32-year-old found himself in a similar position to Mignolet last season having played backup to Lukasz Fabianski, and he may again be satisfied with the understudy role to make the move to Liverpool.

He’s been tentatively linked with the Reds in recent weeks, and with over 180 appearances across the English top flight and La Liga, he would provide adequate competition for Alisson in training without pushing for the top spot.

Verdict: A sensible move which would prove to be relatively risk-free such is his experience and the lack of initial outlay.

He’s a seemingly perennial second-choice stopper at club level having found himself struggling to break into Barcelona’s first team for the last three years—but, he is expected to leave this summer.

It’s a role he wouldn’t step out of at Anfield, but he has vast experience and would prove to be a safe choice in cup competitions as his limited outings with Barcelona and displays on the international stage show.

Alongside national compatriots and Liverpool’s Virgil van Dijk and Gini Wijnaldum, Cillessen is a mainstay for the Netherlands, making 48 appearances and keeping 21 clean sheets since his debut in 2013.

Verdict: A reliable shot-stopper with brilliant distribution, the question is whether he would trade one bench for another.

The Saints stopper had been linked with Liverpool as a possible first choice last season but now finds himself in the discussion for Alisson’s deputy.

McCarthy, 29, was Southampton’s No. 1 at the start of the 2018/19 season before being replaced by Angus Gunn towards the end of the campaign and could, therefore, be tempted by a switch to the champions of Europe.

He has vast experience playing throughout England’s Football League structure and would seemingly not be averse to a change in scenery having played for over seven different clubs in his career.

Verdict: Another sensible option for Liverpool and one which is unlikely to have a hefty price tag should they make an approach.

A name not foreign to Liverpool’s search for a goalkeeper, Butland was heavily linked with a move to Anfield prior to Alisson’s arrival.

And should he seek a return to the Premier League he would be a more than qualified No. 2 for the Reds having already made 77 career outings in the English top flight.

Butland, 26, spent last season with Stoke in the Championship, keeping 18 clean sheets in 45 appearances and has already attracted interest from Bournemouth and Aston Villa.

Verdict: A capable ‘keeper, but Liverpool are unlikely to entertain Stoke’s sizeable demands.

Pavlenka, 27, is an impressive ‘keeper entering the prime of his career and is coming off the back of two notable campaigns with Bremen.

He has been a mainstay for the German side since his arrival in the summer of 2017, where his quick reflexes have been the highlight of his play.

He is considered as one of the Bundesliga’s top ‘keepers and he would appear to be the type of player capable of competing alongside Alisson on the shot-stopping front.

Verdict: He would be as strong as an understudy as you could hope for and that may prove to be the stumbling block, as he is unlikely to want to watch the action unfold from the bench.

It would make sense to opt for a promotion from within for Kelleher should the Reds go down the path of a young understudy.

The 20-year-old has yet to make a competitive appearance at senior level but did pick up a Champions League winner’s medal after earning his place in the squad as Jurgen Klopp’s third-choice stopper.

He is a bright prospect and one Liverpool will be eager to see continue his development under a first-class goalkeeper.

Verdict: Despite the cost-effectiveness of such a move, he would be a risky choice should anything happen to Alisson as he is completely untested. Likely to be a case of too much, too soon.

Randolph’s 2018/19 season was one to remember as his 19 clean sheets in 46 league games saw Middlesbrough have the joint-best defensive record in the division having conceded just 41 goals.

The former West Ham man is good with his feet, is reliable and has previously proven himself in the Premier League—desirable qualities which would make him a more-than-qualified understudy for Alisson.

He’s the Republic of Ireland’s first-choice stopper and after two seasons in the Championship he could be tempted to make the switch.

Verdict: A great option who will likely demand a small fee but like many alternatives, he will need to be content with limited game time.

It would be one emotional return, but more than that the Spaniard’s presence, experience and extensive knowledge of the club would be an invaluable asset.

He’s currently playing deputy to Gianluigi Donnarumma at Milan, and would unlikely need much convincing to make the return to Liverpool after five years away from the club he won four honours with throughout a nine-year spell.

Reina has two years left on his contract but is unlikely to demand a lofty fee—however, at 36 years of age, he does not fit the mould of a player Liverpool typically target under Klopp.

Verdict: More than capable of still doing the job, but it’s a move which could be considered short-sighted in view of Liverpool’s ongoing project.

If Liverpool were to look to youth for the vacancy then the Cherries’ academy graduate could be a great place to start.

The 20-year-old rose from obscurity to the limelight after being named Man of the Match in his Premier League debut in a win over Tottenham, which saw him keep his place in the side for Bournemouth‘s last game of the season.

He looked at home in the first-team environment and while he still has a lot of development ahead of him he looks a promising prospect who would flourish under Alisson‘s guidance.

Verdict: An exciting player who has shown he has mettle for senior football, but he has two years remaining on his deal at Dean Court and he may prove hard to pry out Bournemouth‘s hands.