Roberto Firmino had a goal and an assist both ruled out—one through VAR—as Brazil were held to a frustrating 0-0 draw in their second Copa America tie.

The tournament hosts got off to a perfect start on Saturday with a 3-0 win over Bolivia, with Firmino playing the first 65 minutes and setting up Philippe Coutinho‘s second.

But they were left disappointed in their follow-up against Venezuela, trudging off the field in Salvador ruing the influence of VAR.

Firmino started his second consecutive game after establishing himself as Tite’s first-choice striker, joined again by Richarlison, Coutinho and David Neres in an impressive four-man unit.

Brazil were the better side throughout, creating 11 chances to their opponents’ five, with Coutinho the most influential as he crafted three openings.

His former Liverpool team-mate Firmino had the most shots, and one of those rippled the back of the net in the first half, only for referee Julio Bascunan to chalk it off for a foul in the buildup.

Gabriel Jesus, who replaced Richarlison at half-time, then thought he had opened the scoring on the hour mark, but Firmino was deemed offside in setting up the Man City striker after an extensive VAR check.

Finally, a sweeping move in the 87th minute saw Coutinho beat Wuilker Farinez to a rapturous reception, only for VAR to again rule out a winner. 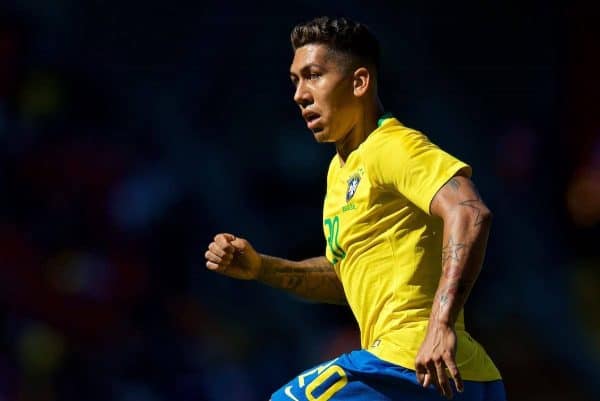 This time it came due to a supposed handball from Firmino, though there was much controversy among fans in the aftermath.

Brazil left the pitch to a chorus of boos from their own supporters, but Tite described both VAR decisions after the game as “correct.”

“I have absolutely nothing to demand. We got justice. They made the right call with both goals,” the manager said.

Alisson also started and played the full 90 minutes in the Group A clash, which still leaves Brazil top despite Peru’s 3-1 victory over Bolivia earlier in the evening.

Brazil and Peru meet in Sao Paulo on Saturday afternoon, in a decisive tie heading towards the knockout stages.