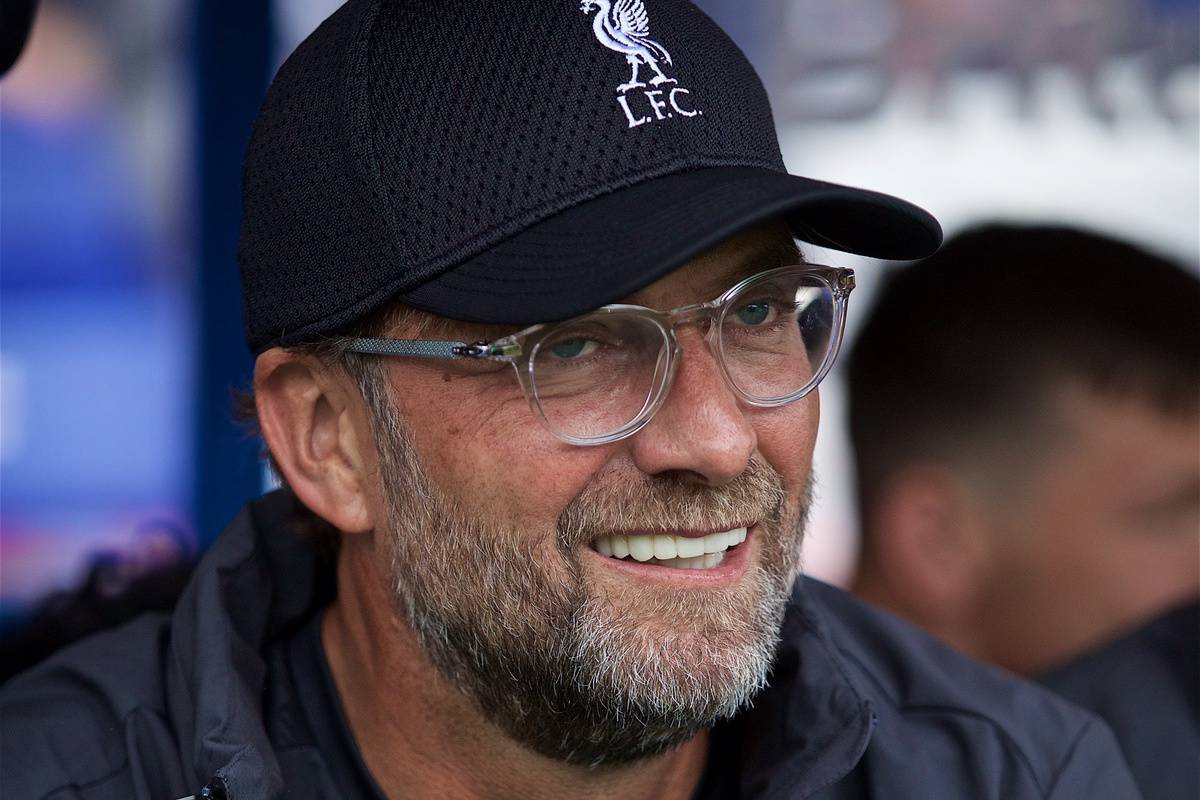 A rare glimpse of Jurgen Klopp‘s tactics board for Liverpool’s pre-season friendly at Bradford has provided an insight into the Reds manager’s approach.

Two goals from James Milner and another from Rhian Brewster in the first half at Valley Parade ensured a second win in a row so far this summer for Klopp’s side.

It was a game of two halves for the Reds as 10 changes were made at the break and, in the boss’ own words, “it was a bit boring” in the second 45 as “we never really could get the rhythm.”

Regardless, despite Eoin Doyle’s consolation from the penalty spot, it was a welcome runout for Liverpool as they continue their preparations for the new campaign.

Klopp’s tactics are a topic of regular discussion among supporters, but beyond interviews with him and his coaching staff including Pepijn Lijnders and Andreas Kornmayer, little in terms of their concrete planning is known.

But a screenshot from LFCTV’s latest ‘Inside Pre-Season’ video shows the manager’s tactics board in the dressing room in West Yorkshire: 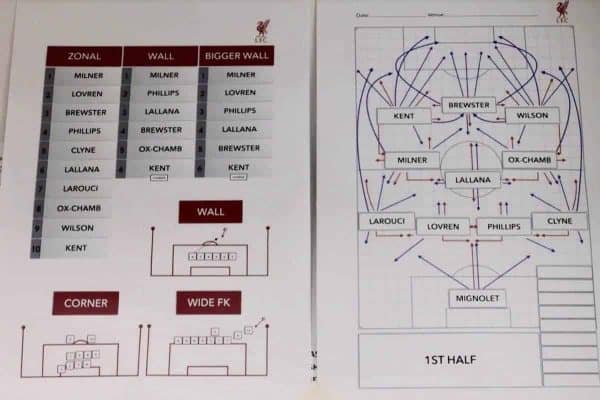 This consists of clear instructions for zonal marking at corners, as well as walls to defend direct free-kicks and set-pieces from out wide, and an eye-catching formation diagram.

The many arrows flowing from each player, in red and blue, denote movements expected from particular positions.

Both full-backs have the same duties, the centre-backs and midfielders are both tasked with interchanging when either required or possible, and the attacking three is seen as a fluid unit.

It explains how players are tasked with dropping in to fill gaps when others overlap; such as the arrow from James Milner‘s position in midfield to the left wing, with Ryan Kent then drilled to drop into the middle of the park.

Perhaps most interesting are the movements of Rhian Brewster up front, and the long, sweeping arrows from inside to out, instructing the striker to penetrate from the sides of the penalty area at times.

Furthermore, there are two different walls: a ‘wall’ and a ‘bigger wall’, with Dejan Lovren taking Alex Oxlade-Chamberlain‘s place for the latter.

Both have Kent designated as a ‘charger’, to close the ball down as quickly as legally possible.

Analysing this tactics board, This Is Anfield’s James Nalton highlighted the similarities, and in some cases differences, when compared to one from Klopp’s time at Borussia Dortmund.

Most telling is the way in which the role of the full-back has developed, as Nalton notes:

Shows clearly how full-backs have evolved into players who join in with the midfield rather than always overlapping. See also Guardiola full-backs.

While at Bradford the first-half full-backs were Nathaniel Clyne and Yasser Larouci—who are noticeably more limited compared to Klopp’s first-choice right-back and left-back—the expectations are clear.

As Nalton writes, the arrows directing the full-backs inside provide another dimension, similar to Pep Guardiola’s setup at Man City.

This has been hugely effective with Trent Alexander-Arnold and Andy Robertson in recent seasons, but it underlines how difficult it will be for the likes of Larouci and Adam Lewis to adapt if they are promoted full-time.

It is unlikely to give opposition managers any clues as to how to break down Liverpool in the upcoming campaign, but it is certainly an intriguing view of Klopp’s approach.