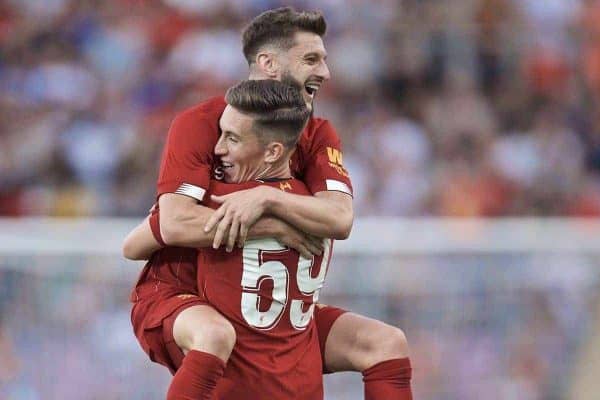 Liverpool moved up a gear as they finished pre-season with a 3-1 win over Lyon on Wednesday night, with Harry Wilson‘s strike the pick of the goals in Geneva.

Jurgen Klopp named all five returning players in his starting lineup, with Alisson, Naby Keita, Xherdan Shaqiri, Mohamed Salah and Roberto Firmino all taking to the field for the first time this summer.

The cobwebs were clear for Alisson as he fumbled a ball from a routine cross and ultimately brought down the striker, with Memphis Depay stepping up to convert a fourth-minute penalty.

There were further errors from Adam Lallana, Dejan Lovren and Joe Gomez soon after, but Liverpool improved swiftly, with Keita strong in midfield and Wilson hitting the post after cutting inside from the left.

But the leveller came via Firmino, with Shaqiri’s cross blocked into his path and, with his back to goal and little else on, the Brazilian swivelled and fired a great finish into the far corner for 1-1.

And the Reds were ahead soon after as Ki-Jana Hoever, fresh from signing his first professional deal with the club, delivered a brilliant ball from the right and, bizarrely, Joachim Andersen hammered a volley into his own net.

Liverpool lost a measure of fluency as Klopp brought off Shaqiri and Firmino on the half-hour, but they remained on top as they closed out the first half at 2-1.

Klopp provided more opportunities to youth at the start of the second half, as Sepp van den Berg, Adam Lewis and Bobby Duncan all came on for their last appearances of pre-season.

Duncan looked particularly bright in the final third, and the forward’s perseverance played a key role in Liverpool’s third—but the finish was all Wilson.

Picking the ball up from Duncan with 35 yards between him and goal, the Welsh winger fired an unstoppable, swerving strike into the top corner to reinforce his claim for a first-team role.

Eleven more changes were made on the hour, with the remainder of Klopp’s substitutes—bar Andy Lonergan—coming on, including 16-year-old winger Harvey Elliott.

The new signing impressed with his one-touch play, a mazy run into the box and a dipping long-range effort, but neither he nor his team-mates were able to add another, leaving it a convincing 3-1 victory.