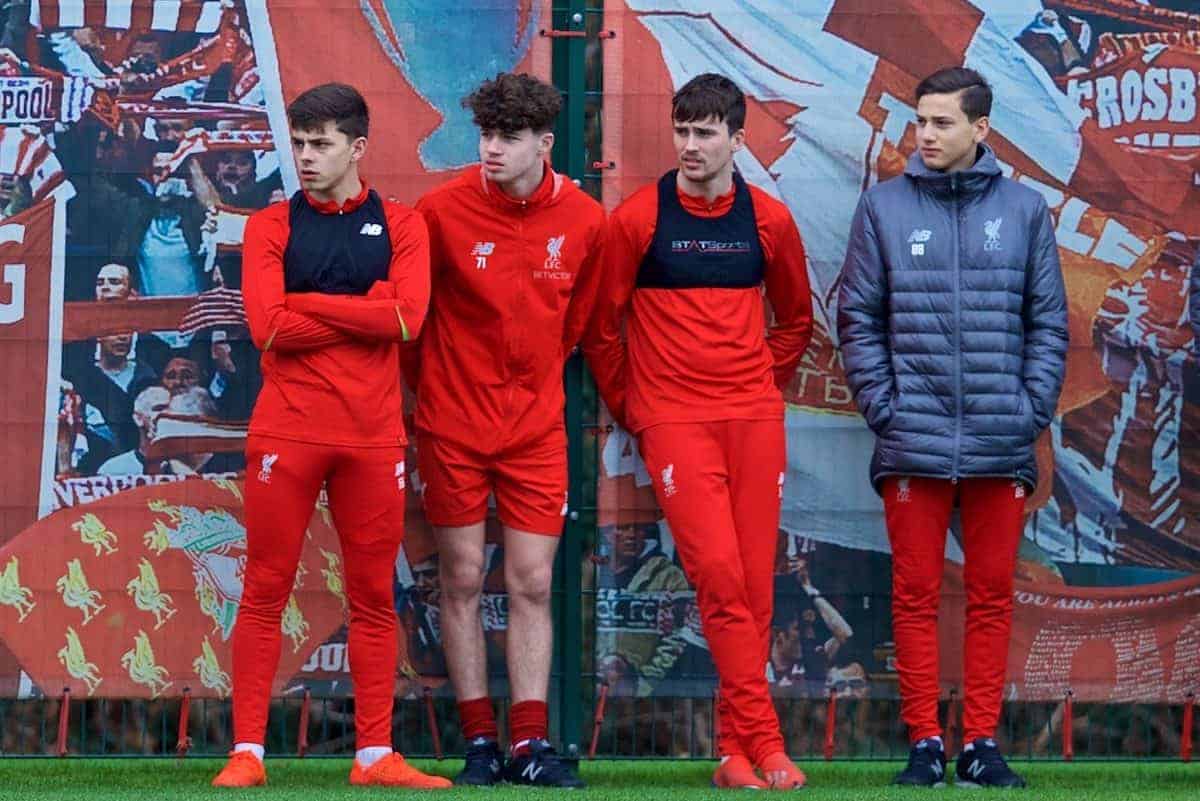 The Liverpool academy began their pre-season plans for 2019/20 on Wednesday, and are being put through the same rigorous sessions as the first team.

While Jurgen Klopp‘s squad won’t report back to Melwood until Saturday, the young Reds were back at Kirkby three days earlier as the under-23s and under-18s started work again.

Last time out was a campaign that saw mixed fortunes for the academy sides, with the U23s failing to challenge in Premier League but the U18s winning the FA Youth Cup and finishing second in the league.

But in 2019/20, both will be aiming to continue their development and look to catch Klopp’s eye and follow the likes of Trent Alexander-Arnold, Rhian Brewster and Curtis Jones.

One of the key aspects of the Reds’ approach is a meticulous approach off the pitch, and U23s manager Neil Critchley has explained that mirroring the senior squad’s schedule this summer is key.

“We try to follow their programme as much as possible—the training times, the amount of training they do,” he told the club’s official website.

“That’s what we’re preparing our boys for, the next step.

“Maybe some of our players will get the opportunity to go to Melwood and train.

“If we are not working closely to how they work—in terms of the loading and the training—then we’re setting our boys up to fail.

“We carry out our testing and then build up the level of training and fitness, quickly introduce them into games.”

The likes of Adam Lewis and Isaac Christie-Davies will have been among Critchley’s group to report back, while a host of other players with unknown futures—including Herbie Kane and Liam Millar—could also be at Kirkby.

It is a constant struggle for the coach as he balances an ever-changing squad with, as he acknowledges, “different types of ambitions,” but he is looking to utilise pre-season to benefit every player.

“The boys look after themselves during the summer, so you can get the footballs out pretty quickly and get into the games pretty quickly,” he added.

“They’re all going to get an opportunity to play.

“With the U23s, the nature of the group that we’ve got, they’ll all have different types of ambitions and goals—and managing that is my job.

“But with the group we’ve got this season, I’m looking forward to working with the players.”

Delighted to have signed my first professional contract for @liverpoolfc ?hopefully many more to come!? #LFC

One player who could make the step up is Leighton Clarkson, with the 17-year-old midfielder signing his first pro deal with the club this summer, following the likes of Paul Glatzel and Rhys Williams.

Another who is unlikely to be involved, though, is Shamal George, who played the first 45 minutes of Swindon Town’s 6-0 win over Brimscombe and Thrupp on Tuesday as a trialist.

George is in line for a free transfer to the League Two side, which could be completed in the coming days.

However, another goalkeeper with a question mark over his future, Dan Atherton, is expected to stay after being offered a new contract.

The U23s are currently scheduled to play pre-season friendlies against The Spartans in Edinburgh on July 15 and Coventry City in Rugby on July 24.