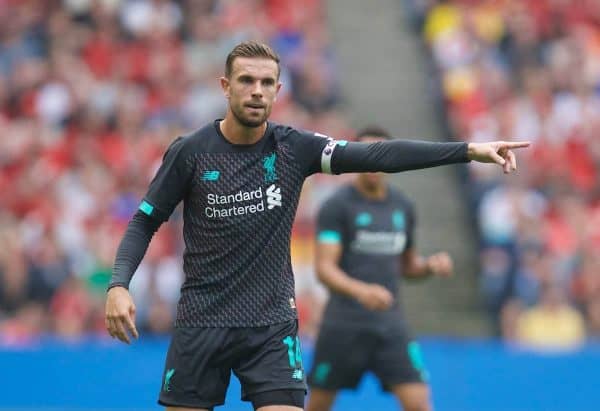 Liverpool will head to Geneva for their final pre-season friendly this summer as a meeting with Lyon awaits in Switzerland.

The Reds kick off the 2019/20 Premier League season in a little over a week, but their pre-season to date has thrown up a multitude of concerns which need to be swiftly addressed.

Jurgen Klopp’s side have failed to win in their last four outings this summer, the most recent of which saw Napoli ease to a 3-0 win on Sunday, as the search for rhythm and cohesion continues.

While results are not the be all and end all as the players continue to be loaded with a heavy training schedule on top of game time, many will be eager to see a noticeable improvement in performance and application against the Ligue 1 outfit.

The squad has been injected with much-needed reinforcements in the shape of some familiar faces, and each could be handed some valuable game time on Wednesday evening.

Here’s all you need to know ahead of the Reds’ final pre-season friendly this summer.

Liverpool named a 29-man squad for their training camp in Evian, France and the mid-week fixture could see a number of players handed their first minutes of action this pre-season.

The major inclusions for the Reds include Mohamed Salah, Roberto Firmino and Alisson following their return from an extended break due to international commitments.

Meanwhile, Naby Keita (adductor) and Xherdan Shaqiri (calf) have also been included for the first time this pre-season after a delayed return due to respective injuries.

The extent of their participation against Lyon is yet to be seen as they continue to work back to full match fitness, but it is likely that Alisson will start in between the sticks in place of Simon Mignolet.

Firmino and Salah, on the other hand, will no doubt have a role to play with Klopp suggesting earlier in the week that “they can maybe play 10, 20, 30 minutes or whatever.”

Their inclusion will be a welcome sight as the Reds have lacked a cutting edge in attack in their absence, where a number of players have been rotated through the front three with varying degrees of success.

Rhian Brewster could see himself line up alongside two members of Liverpool’s prolific attacking trio for the first time and new signing Harvey Elliott could be in the mix for a cameo appearance, should the game allow, after showing positive signs in his debut against Napoli.

Klopp could again turn to the quartet of Andy Robertson, Virgil van Dijk, Joel Matip and Trent Alexander-Arnold for the third successive game as he looks to establish some defensive stability, with Joe Gomez and Dejan Lovren waiting in the wings if needed.

Bobby Duncan and Sepp van den Berg are members of the travelling squad and Yasser Larouci is back in action after avoiding serious injury in a horror challenge in the game against Sevilla, but each are unlikely to see much action on Wednesday.

Ryan Kent, meanwhile, is a notable absentee from the squad due to illness. His future at the club continues to be subject to speculation as another loan move has been ruled out as Liverpool look for a permanent alternative this summer.

Sadio Mane is now the only Liverpool player yet to report back for training.

Bruno Genesio’s side scored 70 league goals throughout their 2018/19 campaign, the second-most of any side in the division; Moussa Dembele led the way with 15 while Memphis Depay scored 10.

Genesio left his post in the summer, however, with Brazilian Sylvinho taking up the position.

Sylvinho played for both Arsenal and Man City throughout his 15-year playing career, and while Lyon is his first managerial job in club football, he has worked alongside Tite with the Brazilian national team.

He has added a number of new faces to the fold this summer, including centre-back Joachim Anderson from Sampdoria, and Lille duo Youssouf Kone and Thiago Mendes.

Lyon are likely to field a strong side against the Reds on Wednesday which is set to include the impressive Lucas Tousart in midfield, Houssem Aouar and Bertrand Traore.

One face which will not be present, however, is Nabil Fekir as the Frenchman finally secured a move away from Lyon, a year on from his failed transfer to Merseyside, having joined Real Betis for £17 million.

Likewise, Lyon will be without key midfielder Tanguy N’Dombélé after he completed a £54m move to Tottenham earlier in the summer.

The Ligue 1 outfit have played three friendlies this summer and twice fell to defeat before emerging as victors 2-1 against Arsenal on Sunday.

The 30,084-capacity stadium – home to Swiss Super League side Servette FC – will play host to the first meeting between Liverpool and Lyon since they clashed in the Champions League group stage in 2009.

The ground is well known by Shaqiri having played a number of international friendlies and qualifiers with Switzerland at the venue.

In addition to hosting football games, the stadium, which is situated on the outskirts of the city, has also played host to rugby union fixtures and NLA ice hockey.

Although results have not been heading in a positive direction for Liverpool throughout pre-season, Klopp was quick to insist that they are “not the most important thing”, instead building the foundations for the long season ahead is what takes precedence:

“Last year we didn’t feel in control but of course, good results in pre-season give you confidence but that’s not the most important thing.

“The most important thing is you get the physical skills for a long, long season. Because during the season we pretty much only have to prepare for games, there’s not a lot of time to train.

“So you have to do what you have to do but it feels not too cool if you then play these strong opponents. We have time to improve and that’s what we will do.”

Liverpool’s final outing prior to the Community Shield matchup with Man City will be shown live on LFCTV and LFCTV Go, where coverage from Geneva will start on Wednesday evening at 5.15pm (BST), with kickoff scheduled for 6pm.

This Is Anfield’s Chris Williams will be providing live updates in our matchday blog, where we will welcome the return of a number of ours stars and hope to see some noticeable improvements in performance levels.

Keep your eyes glued to This Is Anfield throughout Wednesday as we bring you all the latest updates and team news ahead of the game, while analysis will immediately follow after the final whistle.